Calling All Fashionable Students and Wannabe Sci-Tech Students to Tokyo Tech! Lectures of Most Popular Professor out of 1,200 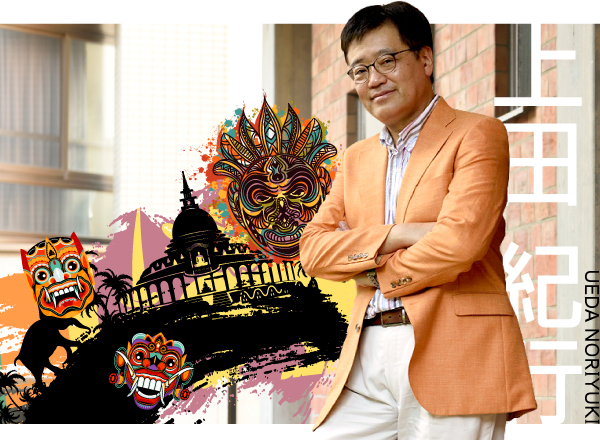 In essence, cultural anthropology means to appreciate diversity. While our world is home to numerous ethnic groups and religions, people in the same society—depending on their gender, generation, or locality of birth or childhood—can have different perspectives. Over in the realm of science and technology, the concept of only one correct answer prevails; however, multiple correct answers exist in the real world we actually live in.

Every individual possesses their own correct answer and must live in harmony with others who possess different correct answers. Learning about cultural diversity, therefore, promotes understanding of others and leads to deep contemplation about oneself. How does an individual lead his or her life so that others can live, and society can be a better place? I retain this key question at the core of my regular lectures.

The lectures get the students off their feet in workshop format to experience culture. One really fun program is the Balinese ketjak, which is composed of four rhythm parts. When layered together, the ketjak has 16 beats, but learning one’s part without getting confused by the other rhythm parts is a challenge.

Soon enough, you realize you have cohorts with your own rhythm in the classroom, even though your neighbors have different rhythms. You sense the beat of your cohorts and shout—then all of sudden the rhythms everyone pounds out blend together into a magnificent ketjak that feels super fantastic. Then I turn the lights out. The students lose their inhibitions, adding moves and scat chanting. At the end, everyone joins in a large chorus full of enthusiasm.

In a book or video program, cultures and practices around the world are observed merely as unusual activities. But if you actually participate and it feels good, then it’s no longer somebody else’s story. This sensation can create a sense of security when you feel alone in a crowd, with the knowledge that “Some people out there are my friends who hit the same rhythm as me.” In fact, I believe these experiences lead to the elimination of emotional struggles in life and a decline in suicide rate, but words cannot convey my point. So instead, I let students experience the ketjak. 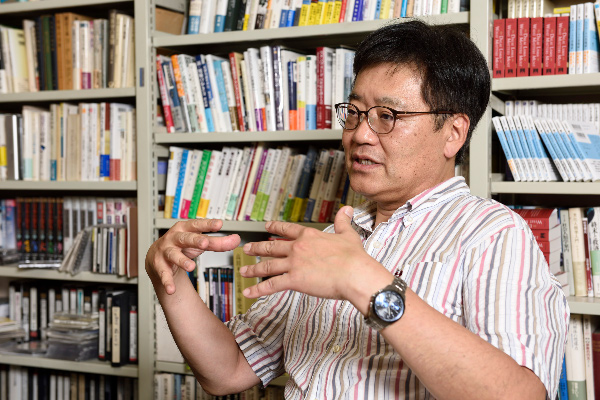 We arrange small seminars that mix students from other universities. The seminar originally was a discussion forum based on individual presentations from a freely selected theme, sometimes an offsite setting where we would stay over and converse late into the night. Well, one year all of the seminar participants were men. The theme chosen by the first participant was romance. His presentation described several types of romantic love, and he said, “I believe that being rejected recently by my girlfriend resulted from a mismatch of types.” The other men in the seminar were apparently convinced, but I got a bit sick to my stomach (laughs).
After that, I recruited students from the Keio University Faculty of Nursing and Medical Care, where I was handling one block of a round-robin lecture course. These female students (and occasionally male nursing students) now participate regularly. The two student groups gain this exchange opportunity with an entirely “different race,” which also leads to understanding others and empathy for diverse ways people live. 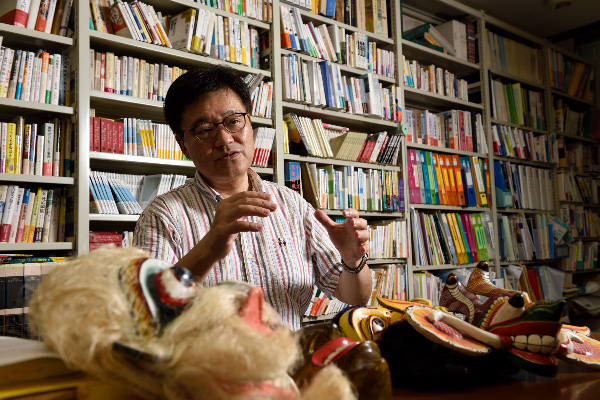 In my books Meaning of Living and Meaning of Loving and speaking outside of the university, I stress the importance of living in a way that befits oneself. The meaning of life sounds rather stark, doesn’t it? (Laughs) But I tell it as it is, since nothing can make it look better. And why does this cultural anthropologist make this inquiry? That is because I had truly lost any meaning to live in my late teens up to my 20’s.
Since I was a child, I was quite talented in getting good test scores, a genuine test fiend who thought geography and classical Japanese were merely tools for getting good scores. Then after I entered university, I saw certain students talking excitedly about ancient Egyptian civilization or Genji Tales, but I had nothing in me with such passion. Despite anger about the cold reality and inequality found in society, I sagged in helpless isolated despair over the inability to change anything, struggled with tension with my parents, and could hardly speak to women after secondary education at a boy’s school. A combination of setbacks pushed me to repeat a year at the University of Tokyo, Second Science Section that I managed to enter by sheer good fortune.

I seem to push my life’s anecdotes, even humiliating episodes on the students whenever I get a chance. The students must think I’m a real busybody, but teachers are ranked by their dislikability. Interestingly, the teachers who say distasteful things or dreamy ideals all of the time tend to stick in adulthood memory. This is true for me, too, when I realize years later what their message really was. My lectures also get pretty edgy, so some students will get it and others won’t. That’s part of diversity in the context of cultural anthropology. The correct answer is not just one.

Significance of teaching liberal arts to science and engineering students 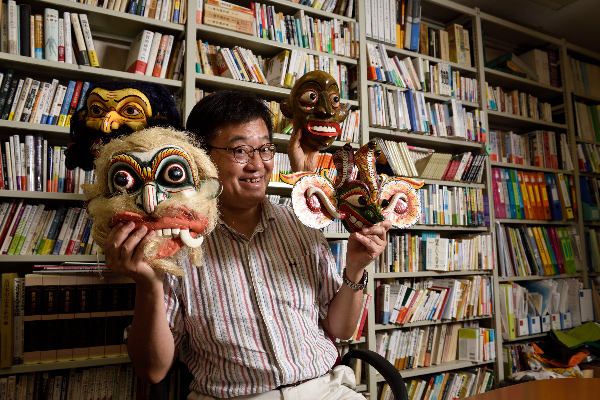 Liberal arts provide the proficiency to liberate the human mind. The times at hand, nevertheless, are asking whether science and technology alone can liberate humans. In other words, do science and technology constitute liberal arts on their own? Will the prevalence of AI make people happy? Or will the domination by AI restrict humans? Genetic engineering, for instance, may be able to heal disease by modifying human genes, but society may become a harder place to live, if humans are ranked on a genetic basis. Convenient and enriching science and technology might be misused or cause warfare.

Actually, greater advancements in science and technology invoke the harder question: what is happiness for humans? People who sharpen the leading edge of science, therefore, really must have a sharpened awareness regarding human society, civilization, and history. Science and technology deliver new creations inherently through the connections to a free spirit. There is significance in identifying what constitutes happiness for humanity and engaging in research to achieve that happiness. In developing such scientists then, liberal arts constitute the academic discipline to provide a foundation for the meaning of life.

Students at our university, therefore, need to have a free spirit that can become enthusiastic over anything. Maybe they were lonely and working just to get better scores like I was, but they can create their future through discourse in seminars and collaborating with colleagues in the laboratory.

Your future does not begin with graduation from university; it begins upon admission. The discourse here connects directly to society and becomes the leading edge of science. In my thinking, a real, live sense of learning develops humanly admirable scientists. Popular society, we feel, considers science and engineering to be uncool, but that can hardly be the truth. Tokyo Tech is filled with incredible students and faculty. Liberal arts add polish to this admiration. Fashionable students and wannabe sci-tech students should most definitely come to Tokyo Tech! 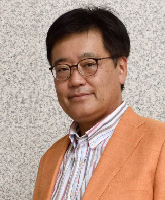 Cultural anthropologist, Doctor of Medical Science. Born in 1958. Admitted from Komaba High School attached to University of Tsukuba to Science Section 2 at the University of Tokyo, and graduated from School of Liberal Arts. Left the University of Tokyo doctoral program with full credit attained and conferred Doctor of Medical Science from Okayama University. Began fieldwork of exorcism in Sri Lanka in 1986. Research from perspective of cultural anthropology about healing, which subsequently becomes a boom. Activities to revitalize Buddhism in Japan led to chairing the Buddhism Renaissance School and advising for Bouz Be Ambitious in 2003. Lecturer in 2005 as Fellow at Standard University Buddhism Research Center. Ranked by students as number one faculty member among 1,200 at Tokyo Tech for classroom instruction, receiving Best Teacher Award in 2004. Authored 生きる意味1 (Meaning of living) published by Iwanami in 2005, which was subsequently selected by more than 40 universities as material for their entrance exams and became the top citation for exams in 2006. Author of many other titles, including 愛する意味1 (Meaning of loving) published by Kobunsha, 立て直す力1 (Strength to reconstruct) published by Chuokoron Shinsha, スリランカの悪魔祓い1 (Image, Healing, Cosmology, Sri Lanka) published by Kodansha, and 人間らしさ 文明、宗教、科学から考える1 (Discussion of humanism from approaches of civilization, religion and science) published by Kadokawa.