At the 11th Annual Conference of the Japanese Association for Digital Humanities (JADH2021) "Digital Humanities and COVID-19," held at the University of Tokyo from September 6 to 8, Professor Hilofumi Yamamoto and his colleagues, Professor Bor Hodoscek, won the poster presentation award of the conference, the Digital Humanities Poster Award of the University of Tokyo for their research on "Open Source Data of the Hachidaishu for the Study of Japanese Poetic vocabulary in the Heian and Kamakura periods. The Japan Society for Digital Humanities, founded in 2010, is Japan's first international society for the study of the humanities using digital methods, and serves as a research base for the European Society for Digital Humanities and other digital humanities societies around the world. The University of Tokyo's Historiographical Institute was founded in 1793 by Hanawa Hokiichi, a scholar of Japanese literature, with the support of the Shogunate. Today, the Institute is recognized as a "Research Center for the Resourcefulness of Japanese Historical Materials" and compiles historical materials on ancient, medieval, and early modern Japan as an inter-university research institute. For the first time, the Japan Society for Digital Humanities and the University of Tokyo's Historiography Institute have given an award for excellence in conference presentations. Professor Hilofumi Yamamoto has been conducting research on the Imperial Anthology of Japanese Poetry and the Hachidaishu since 2000, from the Kokinshu to the Shinkokinshu (ca. 905--1205; about 9500 poems. Professor Hodoscek awarded Doctor of Engineering from Tokyo Institute of Technology and has been conducting research on ancient languages with Professor Yamamoto since 2012. The award was given to them for uploading the computer programs and data sets they have accumulated over the years to the Internet, as well as for making the data processing procedures available as a showcase for hands-on practice in a format that is easy for early researchers in the digital humanities. 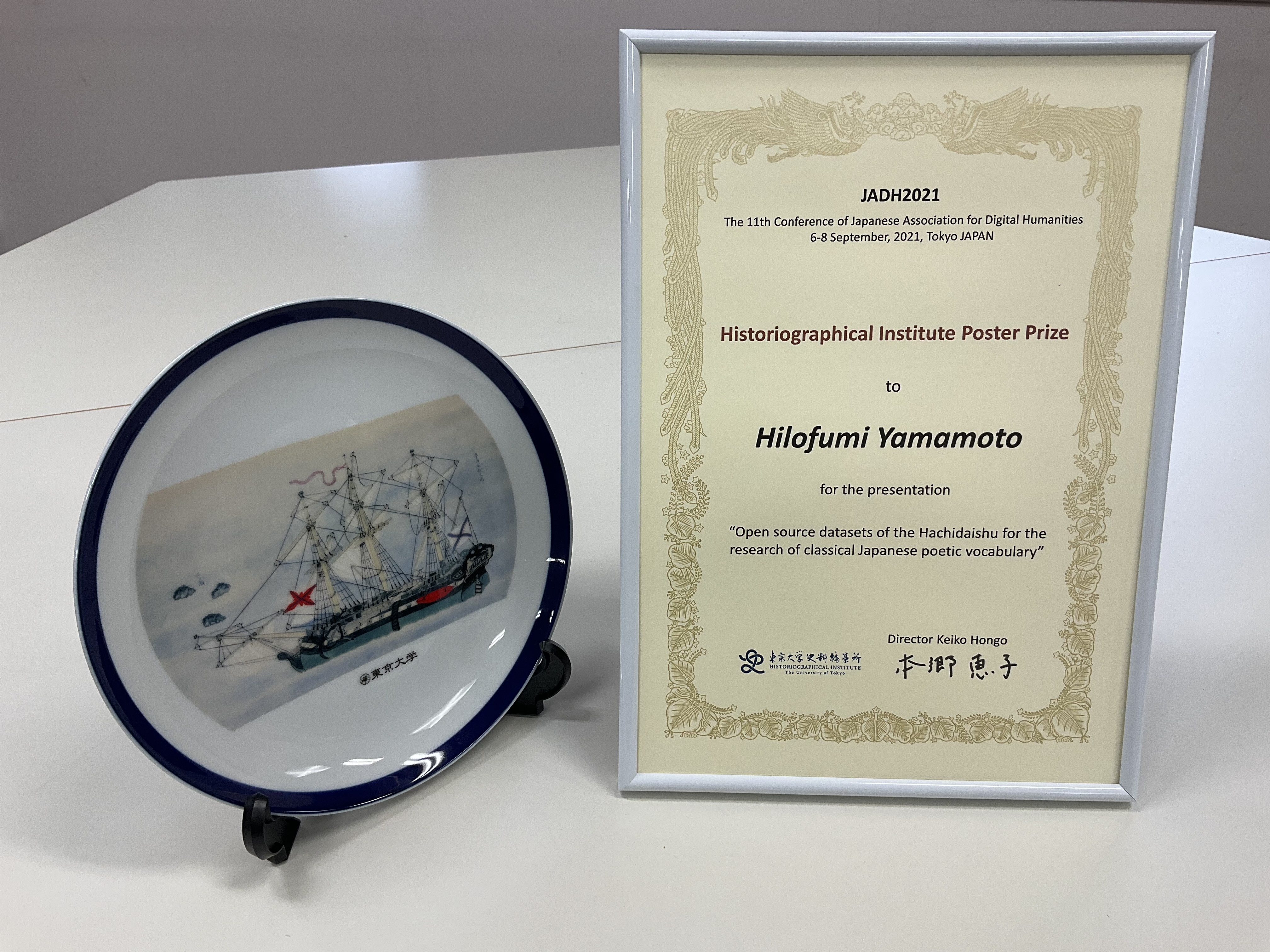 I have been conducting research in this area for about 20 years now, and although the technology itself has not changed since that time, I am happy that the importance of research in this area has been recognized as the digital humanities have become known to the world. Rather than the development of technology, I think the major progress is the fact that research in this area is a fairly broad interdisciplinary field and that it is now common practice to clear various copyrights and go ahead with publication. I hope that researchers from all over the world will use our data to conduct more active research on Japanese classical literature and language. I also hope that Japanese language and culture will be compared and discussed with various other language and cultures around the world.