A study on the extraction of relational pairs of 'orange', 'plum', and 'cherry' flowers in poetic Japanese

Research from Institute for Liberal Arts Professor Hilofumi Yamamoto was awarded the Best Poster Prize at the Computers and the Humanities Symposium, organized by the Information Processing Society of Humanities and Computer Studies, and held at the Sugimoto Campus of Osaka City University on December 9th and 10th. 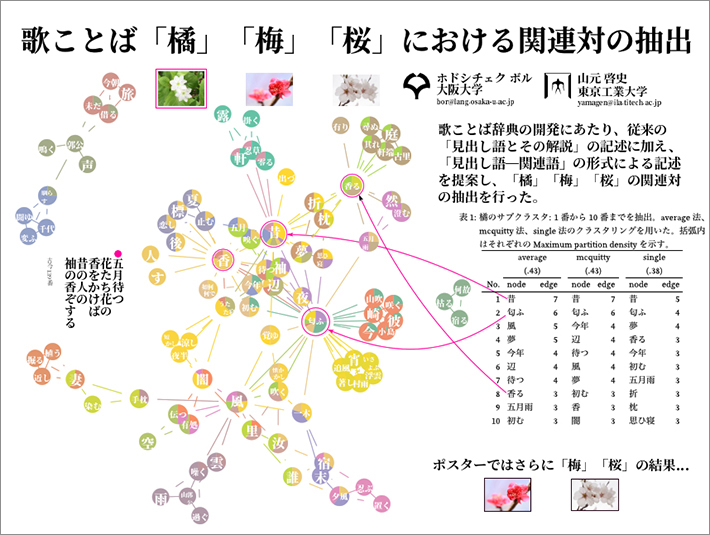 The award-winning title was "A study on the extraction of relational pairs of ‘orange’, ‘plum’, and ‘cherry’ flowers in poetic Japanese." The research frames poetic Japanese vocabulary from the Heian period and onward in terms of leading and supporting characters in a play, extending the traditional dictionary entry description of leading words such as ‘orange’, ‘plum’, and ‘cherry’ flowers by showing their connection to their supporting words.
The selection of supporting words was achieved through objective algorithmic means devoid of the subjective interference of modern Japanese knowledge. For example, the leading role of the orange ‘tachibana’ flower, traditionally associated with summer, now inter-linked with the supporting roles of ‘mukashi’ (old), ‘ka’ (fragrance), ‘niofu’ (smell), ‘makura’ (pillow), and ‘yume’ (dream) allows an interpretation of ‘tachibana’ to be “reminded in a nostalgic dream of the smell of an old lover”. This linked structure was found to be closely related to the waka “五月待つ、花たち花の、香をかげば、昔の人の袖の、香ぞする” found in the 60th section of the Tales of Ise.

The method used in this research does not come from traditional linguistic principles but is grounded in network community analysis, where the focus is on analyzing the community structure of connections between people. For example, while leading cast members Brad Pitt, Tom Cruise, and Johnny Depp rarely star in the same movies, supporting cast members such as Kevin Bacon (cf. Bacon Number) take on many roles and freely co-star with them. Just as there exist words that convey a strong and impressive meaning, there are words that are less memorable but that when connected with other words convey a potent message together. This connection was found to explain the different roles and meaning of polysemious words—words that can mean different things in different contexts.

Through this method, Professor Yamamoto's research group is trying to develop an analysis and machine description of ambiguity in language from the viewpoint of historical linguistics.

The research awarded was based on the JSPS Grant-in-Aid for Scientific Research (C) “Basic research on the development of Classical Poetic Thesaurus in terms of time-space description.” This content was also presented under the JSPS "Hirameki ☆ Tokimeki Science" program for junior high school students. 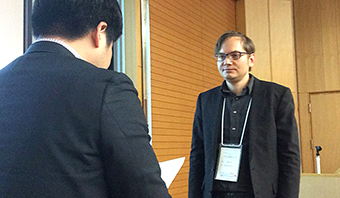 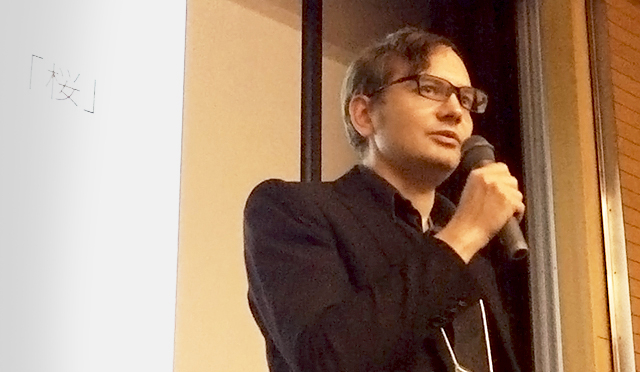 The researcher collaborator on this project, Dr. Bor Hodošček, got a doctor of engineering degree at Tokyo Institute of Technology and is now an Associate Professor at the Graduate School of Language and Culture, Osaka University. The poster award is a recognition of the intuitive and effective presentation of conveying the ambiguity of language devised by Dr. Hodošček.