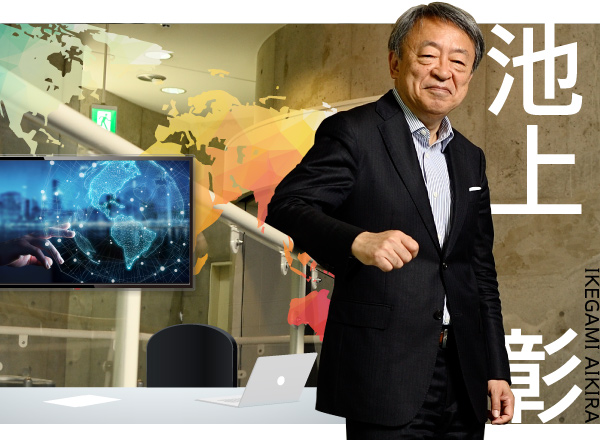 History teaches researcher fundamentals What is the mission of the Tokyo Tech brand?

I teach contemporary society at Tokyo Tech. I assumed my post as professor at the Center for Liberal Arts in 2012, and the Institute for Liberal Arts (ILA) was established in 2016. Since retirement in 2017, I have continued to teach the importance of learning modern history as Institute Professor.

The knowledge of history supplies an essential key to understanding society today. World history and Japanese history taught in high school, however, ends with World War II. History classes in school don’t cover the post-war years up until today. In other words, the period of Japan’s economic miracle, the Cold War, the Vietnam War, the Aum Shinrikyo religious cult crisis at the end of the 20th century, and the World Trade Center terrorist attacks at the beginning of the 21st century are not officially taught subjects. This is the reality, even though our young students today have no direct knowledge of these events. By filling this knowledge void, I want them to gain more interest in modern Japanese and world history and in the establishment of our society.

Learning about history relates directly to research stance and occupational ethics for Tokyo Tech science and engineering students. Let us consider one excellent example: Minamata disease is one of the four major pollution-induced diseases of post-war modern Japanese history. The first case was discovered in 1956, a central nervous system disorder caused by methylmercury compound poisoning. But initially the unknown cause labeled it an “oddball” disease. A research group at the Kumamoto University School of Medicine subsequently hypothesized the causative substance to be methylmercury and requested chemical manufacturer Chisso (formerly Shinnippon Chisso Hiryo) to cooperate in investigating its plant wastewater. Chisso refused, and the Japan Chemical Industry Association took a stance to protect Chisso.

The individual who inadvertently shielded Chisso at the time was Professor Raisaku Kiyoura of Tokyo Tech. His “amine theory” pronounced the cause of Minamata disease to be decomposed fish, and not methylmercury. The views of a Tokyo Tech professor at the pinnacle of Japan’s science and engineering authority were disseminated as fact more authoritative than the investigative details of the Kumamoto University School of Medicine and consequently delayed the elucidation of cause. Chisso wastewater was later established as the cause, but the government’s opinion was not finalized until 1968.

After I presented the story in class, I asked my students, “What action will you take in the future, if pollution is found in the environs of a company you work for? How would you react to a request for a ‘scientific opinion’ convenient for the business?” Silence fell on the classroom. In that moment, Minamata disease, recognized previously as just a line item in history, suddenly became relevant in a personal way.

So, I ask everyone seeking to enter or already enrolled at Tokyo Tech, what would you do in the face of such a situation?
Tokyo Tech has the brand power of top science and engineering institution in Japan. That brand could be put to poor use. We must prevent such a tragedy from occurring. For Tokyo Tech graduates to contribute properly to society as engineers and researchers, they must learn history and liberal arts as secure references on how to lead one’s life and support one’s ethical views.

3-11 prompts the call to teach at Tokyo Tech,to bridge science and letters 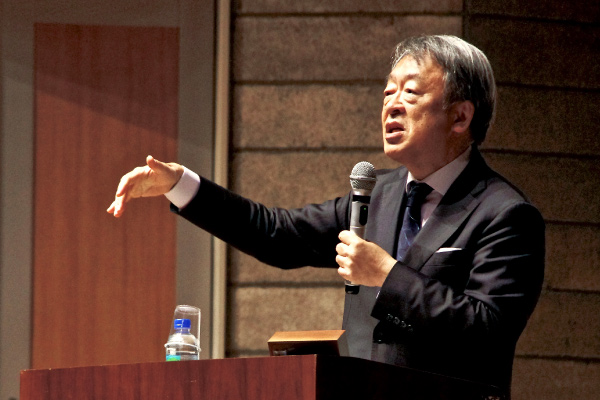 The East Japan Earthquake of March 11, 2011 and ensuing Fukushima nuclear power plant accident led to my involvement in Tokyo Tech liberal arts education. At the time, I was dedicated to the research and writing of a book and refraining from TV appearances. Like many others, I was watching the terrible events unfold as a TV viewer. The public was most certainly concerned about the radiation caused by the nuclear power plant accident.

The TV news was incredibly hard to follow, however. Experts used their own words and presented figures, but the actual condition of the nuclear accident was unclear. The news announcers sitting at the side simply nodded their heads and provided no detailing to the academic opinion. Falling into a negative spiral, many viewers who watched these types of programs became even more worried.

I sensed a deepening chasm in Japan between wisdom belonging to the literary, and to the scientific worlds. We had a major crisis among scientific experts, who lacked the skill of simple communication. When I realized something had to be done, Tokyo Tech had approached me with spectacular timing.

I was 60 years old and trying to find something meaningful to do for Japan. The opportunity to teach liberal arts to Tokyo Tech science and engineering students was a godsend. The student body of Tokyo Tech is the future pool of scientists and engineers who will shoulder the nation of Japan. My work could be a bridge between literary and scientific; my instruction could inculcate competence to communicate and think.

Assuming my post as professor at the Center for Liberal Arts (predecessor to today’s Institute), I joined professors Toshio Kuwako, who became director, and Noriyuki Ueda in 2012. The establishment of the center marked a rise in liberal arts education at universities throughout Japan. Many new departments and faculty opened nationally, crowning their names with “Liberal Arts.” The media world responded to the frenzy by publishing related book titles in succession.

In the backdrop of this rush sat many retired individuals of my generation, wishing now to regain the elements of liberal arts missed from their lives of wall-to-wall work. The liberal arts are accessible and enriching to students, as well as parents, grandparents—people of all age brackets. It’s never too late to learn, but college years are simply perfect to absorbing as much as possible. 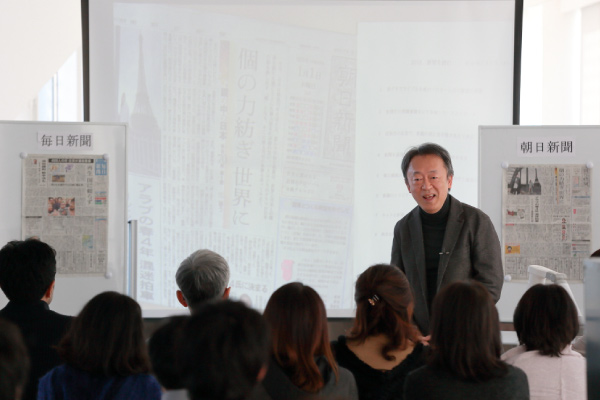 Immediately before the Institute for Liberal Arts was established, I visited prestigious universities in Europe and the U.S. with professors Ueda and Asa Ito. The biggest surprise was MIT, the world’s ultimate institution of science and engineering. We heard that “Cutting-edge science is not taught” during the four undergraduate years, because “The most advanced subjects quickly suffer obsolescence.” Instead, MIT educational policy fostered liberal arts along a number of avenues to form the flesh and blood of intellect, including music. In the long run, liberal arts that have no immediate utility win out over immediately useful knowledge. This idea squared with the inherent essence of liberal arts and impressed me.

Harvard and Wellesley also espoused liberal arts education for the four undergraduate years. For aspiring physicians and attorneys, professional courses at medical school and law school followed after graduation. The system at Harvard, where I also attended a lecture, was intriguing. The initial class was a lecture by the professor and the next class was for questions and student discussion based on the lecture. This two-part configuration became our model for Tokyo Tech Visionary Project at the ILA.

First-year Tokyo Tech students enroll in Visionary Project right after admission. The first lecture in the main hall is my province. I fire up the new students, saying “You are talented seekers of the correct answer, but the real world is full of questions without answers. You can become people who create the questions,” and “Unlike textbook learning up through high school, advanced university research can make mistakes. Don’t take the words of your instructors instantly.” These early admonishments imply another truth: I want the students to challenge anything I say (laughs). Based on my lecture, the next class is work in small groups. This pairing is set for six lectures including my own. Debating in the groups, writing reports, and presenting one’s vision as an aspiring student aim to develop competency across thinking, speaking, debating, challenging, writing, and communicating.
Changes are evident among the students since Visionary Project began. Students taking my classes in modern history ballooned. When I started in 2012, 800-plus students signed up for Contemporary Society. My tough grading pushed 30% of the students to drop the class, however, and interested students quickly decreased. But the year after Visionary Project launched, sign-ups vastly recovered, even though my grading remained quite strict. I interpreted this as a sign that students recognized liberal arts to be interesting and important.

In a nutshell, liberal arts provide us the vigor to keep learning, I think. After graduating, my students remain eager to learn. In reply, I arrange periodic book-reading conferences for graduates and current students. The opportunity is refreshing for them, stuck reading scientific papers much of the time, to be exposed to literature in the fields of sociology or humanities. Nowadays, I see graduates from the work world together with students still in university discussing thick books of assigned reading from the humanities or sociology. They find time amidst their busy lives to attend every meeting.

The Aum Shinrikyo doomsday cult presents the classic case. Their criminal acts involved large numbers of excellent science, engineering, and medical graduates from the University of Tokyo, Keio University, Waseda University and Tokyo Tech. How did these rationalists with scientific knowledge get caught up in a cult religion? Well, Aum teachings took the best parts of Buddhism, Hinduism, and Christianity.If these intelligent people had received rudimentary introductions to religion, then they would have recognized the dangers of a cult and avoided the deception. Unfortunately, rationalists without a rounded view belittle religion without studying the subject and ultimately become easily brainwashed. I still wonder what the difference would have been if they had had the opportunity to study liberal arts.

The liberal arts do not get acquired instantly and aren’t immediately useful. The discipline, nonetheless, will continue to support you like strong roots, when you begin your research job or throughout your life as an engineer. Tokyo Tech offers liberal arts instruction for the undergraduate four years, graduate school, and doctoral program, in a measured, steady fashion. I personally consider the curricula of the ILA to be stellar. Let’s partake of it together. 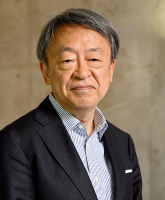 Born 1950 in Matsumoto, Nagano Prefecture. Graduated from Faculty of Economics, Keio University and joined NHK broadcasting in 1973 as a career broadcast journalist and later, a newscaster. Held the “Father” role in the “Weekly Children’s News” for 11 years starting in 1994, gaining popularity with easy-to-follow commentary. Freelance journalist after retirement in 2005, flying around the globe to report and write, and comment on TV and radio programs. Assumed post as professor of Center for Liberal Arts at Tokyo Tech in 2012, and current post in 2016. Teaching assignments span Meijo U., University of Tokyo, Shinshu U., Aichi Gakuin U., Nihon U., Rikkyo U., Juntendo U., and Kwansei Gakuin U. Authored titles include 池上彰の教養のススメ1 (The Value of a liberal arts education by Akira Ikegami) published by Nikkei BP, and three compilations of Tokyo Tech lectures published by Bunshun Bunko; この社会で戦う君に「知の世界地図」をあげよう1 (World map of wisdom for you, the fighter in society), この日本で生きる君が知っておくべき「戦後史の学び方」1 (Learning post-war history for living in Japan), and 学校では教えない「社会人のための現代史」1 (Modern history they don’t teach at school for career businesspersons).