Provoking Students to Elicit Their Direction of Inquiry 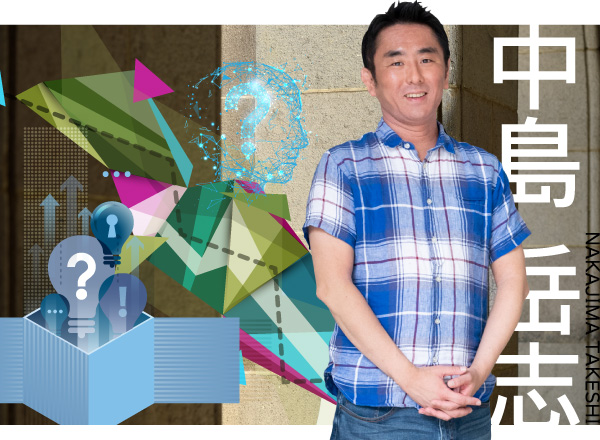 Fostering the most important encounter: self

I teach political science.
For the Political Science A class, however, I want to explain my direction of inquiry first, before embarking on a survey of political theory. Drawing on content familiar to the students like the animation Neon Genesis Evangelion, we discuss nationalism and modern society, the relationship between politics and the modern struggle to live, and what is forbidden in politics. Everyone at the end of teenage youthhood has vague insecurities about their identity and their own existence. I choose to hit that vagueness head-on with the big question, “What is politics?” The instruction elaborates from there.

In Political Science B, the discussion moves from fundamentals of political science to discuss the real politics unfolding in Japan at the moment. In addition to the political framework of Japan, I make sure that perspectives from all over Asia are covered. For instance, Mahatma Gandhi: The massive riots in 1946 that occurred in India around Calcutta ended when Gandhi fasted nearly to death. Most textbooks of political science describe a process of intervention by the United Nations as a global institution promoting peace. These texts do not mention a leader of peace nearly dying from not eating.

Peace returned to India, in fact, when Gandhi fasted in a gamble with death. A self-provoking question that Western political science cannot assess, a kind of religious upwelling in people, who thought they might become a murderer of Gandhi, halted the rioting in India and brought peace.

I consider this internal change among the people of India at that time to be a lasting truth for humanity—not a momentary miracle in India. Adding to the orthodox political science doctrine through such perspectives, I urge my students to consider different possible root causes to action taken in real politics and society.

We go to the World War II years for Political Science C and see the struggles of the younger generation thrown under ultranationalism in Japan. The lens of post-war democracy inevitably tends to critique this wartime ultranationalism, but I intentionally avoid that approach. Students read the raw essays written by young Japanese, who are the same age living in a different time. Their voices are examined in order to comprehend the inherent components and the reasons why the young moved quickly to advocate ultranationalism. Sometimes, we must have a conversation with historical perspective, where we must imagine ourselves there at the time. I explain that only then are we able to imagine their circumstances.

In my estimation, this university is not asking me to teach political science as presented in the textbooks. Tokyo Tech students have subconsciously sealed off certain subjects. Other subjects cannot be logically explained. I turn around and serve these subjects to the students to provoke their common sense. In fact, the real stage of my instruction is probably beyond the classroom. My constant mantra is to go directly to the bookstore, if anything provokes a question. The moment a question arises in class, your consciousness is elevated. A book at that timing can be absorbed readily. There is no need to memorize anything from my instruction. Instead, I hope the provocation and stimulation furnishes a means to be self-directed in thinking and taking action.

All third-year undergraduate students must write the Liberal Arts Final Report at Tokyo Tech. Instruction for this final report, typically 10,000 characters in length, emphasizes the capacity for inquiry. We often hear that encounters with books and other students are important university experiences, but self-encounter is actually of utmost importance. What are your own considered questions? What is important in life? My message to the students reflects on the feelings I had when I wrote my graduation thesis, and the joy and fun associated with writing what nobody else can, in the hope their chances of answering these two questions increase.
In my guidance to graduate students as well, I recognize the importance of eliciting the questions and interests in their minds. The instruction obviously introduces the basic rules to research writing, such as reading through prior research before starting one’s own research and writing a thesis. Nonetheless, I avoid excessive intervention and respect the research and writing as individual works.

Contemplating modern Japan and living there 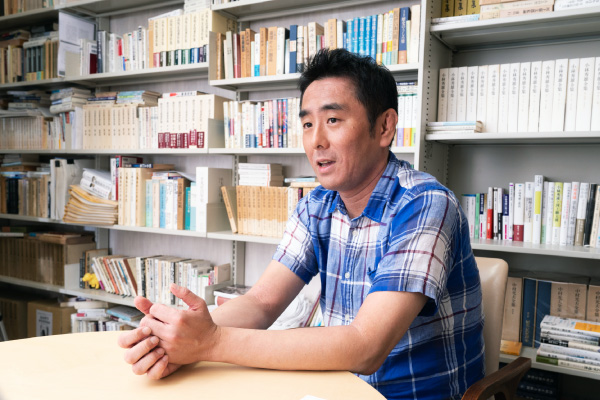 My greatest personal interest lies in the relationship between the human mental state and politics, specifically three main areas: contemporary Japan, wartime Japan, and global current affairs leading off with India. These form the core of my research.
My personal experience of the Hanshin Awaji Earthquake at the age of 20, on January 17, 1995 factors heavily. From the ruins of World War II, Japan piled the concrete high to advance economically. The nation expanded its economy continually until the Bubble Economy burst. Then, we saw how one major earthquake could cause concrete structures, our symbols of economic growth, to crumble. I felt like the format that had continued for 50 years after World War II in Japan was symbolically and truly collapsing.

In an about-face, I wondered whether the Japanese could have a mental core dissociated from material goods. That inevitably led to thinking about religion. In practically no time the Aum Shinrikyo subway sarin terrorism occurred on March 20, 1995. The media swiftly brought forth a campaign proclaiming the dangers of religion. Many followers of Aum Shinrikyo who perpetrated the subway sarin terrorism were young, in their 20s and 30s. The media published numerous stories to discuss the reasons why young adults were getting caught up in new religious cults.
But during the time leading up to this incident in the aftermath of the Hanshin Awaji Earthquake, I saw people looking for their ancestors’ memorial tablets among ruined houses and men flying kites in the hope of connecting with their spouses. It was quite impossible for me to rashly throw away religion. Aum Shinrikyo was exclusionary and certainly committed crimes. But if this organization also represented religion, what did religion and faith mean to us? The Bubble Economy had collapsed, the post-Bubble generation I belonged to had entered a freeze in new career hiring, and visibility of my life’s compass was gone. I resolved to study seriously about religion and faith, and this is when my current career as a researcher began.

Another trigger came that same year from the so-called Murayama Statement issued in August 1995. Commemorating 50 years of the war’s end, the coalition cabinet of Prime Minister Murayama endorsed his remorse and apology regarding World War II on behalf of Japan. But the immediate dissent from within the Liberal Democratic Party of the same coalition resulted in a problem of nationalism bearing on the acknowledgement of history.
Born in 1975, I belong to the “lost generation.” As part of the Baby Boom Echo, the numbers in my school classes were large. The grown-ups told us to study at the cram schools, because getting into a good school would let us join a good company for a secure retirement. Unfortunately, the Bubble Economy collapsed when we entered university and a recession followed. We became employment refugees.

Sociologist Shinji Miyadai called us the “laid-back generation,” praised for being adaptive in the late modern era through satisfaction from sporadic moments of enjoyment without any meaning. For myself, the laid-back generation seemed to be over long ago, while I felt compelled to consider a number of meanings, rather than pursue “intensity” such as enjoyment. My contemplation consisted of the relationship between myself and the piercing issues of religion and nationalism that rocked all of Japan.

My research theme has remained fundamentally unchanged since then. My research of political science posits an overarching theme of “modern Japan and living there,” through studying nationalism, religion, and their mechanisms.

Relativization of contemporary Japan as an academic discipline required a comparative subject, which I sought by sliding time and space to yield the research of wartime right-wing Japan. For another subject, I transposed geography and went to India. In the 1990s, India was a hotbed of exclusionary Hindu fundamentalism. During the same period globally, Islamic fundamentalism also rose up to present a synchronous issue: Why religious nationalism been occurring? My plan was to hit contemporary Japan from both sides with these two perspectives.
In my case, my assessment of a research subject, even if an ultranationalist terrorist, never dispenses anybody as merely the “bad guy.” Actually, I loathe creating a framework around my views where my own historical perspectives have to fit in. My writing works when I am aware of the fine line. I consider the live subject, find a path for the parts that fade from view to the left and right edges of discourse, do my internal critique, and question my existence.

Persistent contemplation enables something to begin 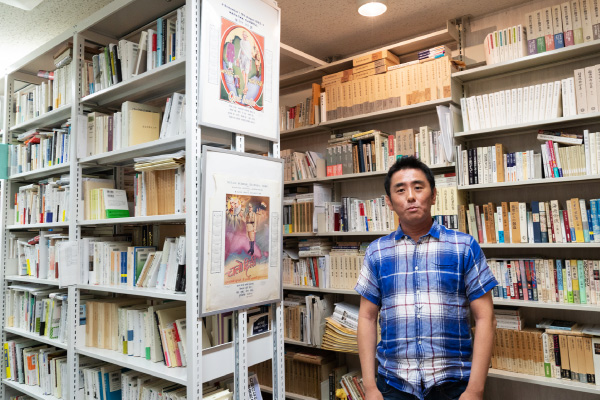 I consider each class instruction a full presentation. I don’t have a teaching certificate, but I am an educator, because of my researcher status. The recognition as expert and researcher in a discipline means I can communicate the research to students. This is the foundation of university education. The respondents, however, are true adults with voting rights. “The people” and I have a flat relationship, so my style is not to teach something, but to throw out questions.

My instruction does not deliver answers. I can teach about how our forebearers considered certain phenomena, or what kind of political process unfolded in history, but the answers are not in my possession. If I knew the answers to “proper” politics, then I should be a politician.

Unfortunately, humans (let alone I) haven’t attained absolutely proper politics, and that outlook is dim. The important effort is to learn from our forebearers and history, and maintain the questions. My classroom instruction simply seeks to provoke the students, unearth the underlying questions, and spark intellectual desire to learn more. I hope to communicate something that helps them remember what I said at a later time, when my students go out into the world and encounter a challenge. Perhaps they will consider buying one of my books.

How can I successfully communicate to young adults? In youth, fundamental issues do not come up in the first place, and problems are difficult to identify. What I can do in this context then, is to keep proclaiming at full throttle what I believe constitute problems for us. At least then the students will remember something in the recesses of their minds. Later, when they do run into a problem, I have already created an index for their reference.
Put another way, I tell my students to attach no importance to what you can comprehend. Whatever you comprehend now is just the level you are at. I want my students to hold close anything they don’t understand right away and to pursue it. This is more important stuff. What is beyond comprehension at current ability, what constitutes an unknown world beyond common sense, can be grappled with and contemplated—and sometimes a path opens up. I want our students to never fear encounters of the unknown and to cherish them.

Tokyo Tech has a perception of free and liberal studying, as a haven of self-centered activity among people that never hit the mainstream of academia, such as Yonosuke Nagai, Shunsuke Tsurumi, Jun Eto. I unilaterally have decided to be appointed as one of these people, too. This institution of science and engineering provides the freedom to do research, disseminate, and educate by a literary researcher like me. The Institute for Liberal Arts at Tokyo Tech is a generous forum in this regard. 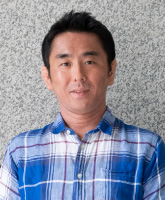