Thirty-eight participants joined an in-person New Year's card workshop on November 30, providing Tokyo Tech students with some important social activity after a long period of online-only events. While taking appropriate measures against the potential spread of infection, participants were split into two separate sessions due to heightened interest in the workshop.

One of the New Year's cards from this event

The popular New Year's card workshop has been held annually for many years, but went on hiatus due to COVID-19. To ensure social distancing, this year’s event was held in two different rooms. The rooms were also connected virtually so that participants in one room could observe activities in the other via a large monitor and communicate with their peers. Faculty from the Japanese Section of the Institute for Liberal Arts (ILA) were present in both rooms. 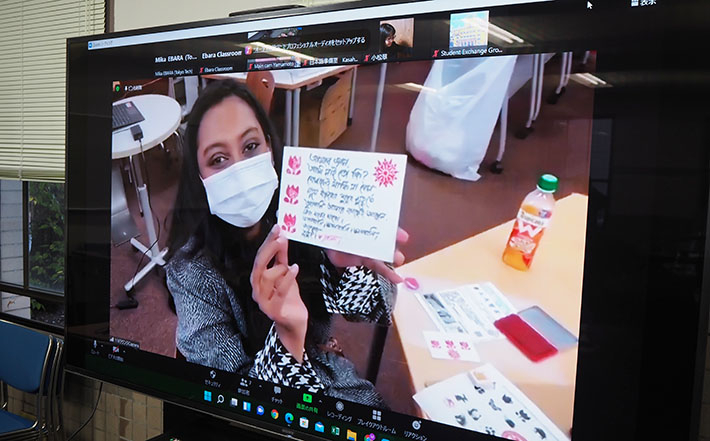 To kick things off, participants first created stamps from erasers. Students carefully carved out original pictures, characters, the Tokyo Tech Seal, tigers to represent the year 2022, and other unique creations that would later decorate their cards. Some students created incredible details, receiving praise from their fellow participants.

Once the stamps were completed, they were used to create original New Year's cards and greeting cards. Students enjoyed stamping each other's cards, carefully writing messages to their loved ones in their home countries, and teaching each other how to express New Year's greetings in different languages. 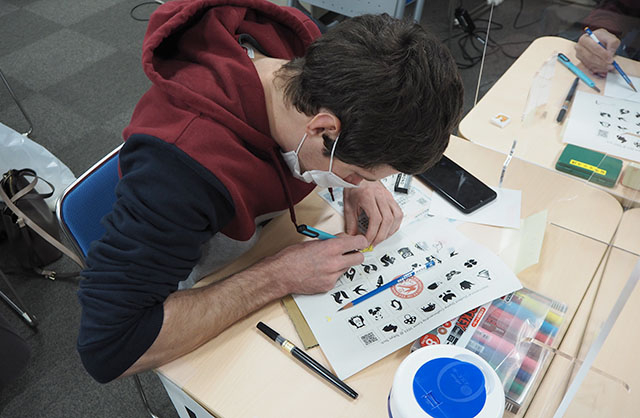 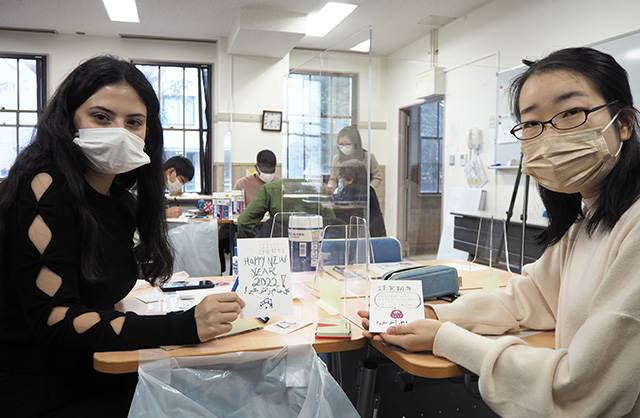 To create a pleasant memory of the fun afternoon, the participants finished the event with group photos in their classrooms and outside West Building 1 on Ookayama Campus.

Participants of second session with their creations

Comments from students after event

●I enjoyed creating eraser stamps for the first time, but most of all, I enjoyed speaking with international   students. Compared to our online discussions, I think we were able to talk more and understand each other    better in person. Thank you very much.
●It was fun to try a new thing and make a New Year’s card with our own stamp.
●This was lots of fun and I hope to do it again next year!

We initially planned this event for approximately ten participants, but due to the high number of applicants, we decided to hold two separate sessions, both of which included the use of two rooms that were connected with monitors. This resulted in four times the originally planned number of attendees.

After reading the participants' post-event comments, it is clear that most simply enjoyed meeting and chatting with others, and viewing each other’s creations. In our daily lives, meeting, speaking, and seeing have all been natural things until recently, and we have again been reminded what has been missing from our lives.

The participants said they came to the event because they wanted to meet international students, greet friends and faculty they had only ever met online, and gain new experiences. It seems faculty and staff need to devise ways through which students can find ways to restore the balance in their everyday lives.

I believe the decision to have staff from the International Student Exchange Division and ILA's Japanese Section handle preparations for this event was the right one. I hope we can continue to maintain effective infection prevention measures while restoring a certain level of daily normalcy through our international exchange activities. We look forward to your continued support for Tokyo Tech’s international students.