Proteases are ubiquitous whereas peptide ligases, enzymes catalyzing the reverse reactions of proteases, are exceedingly rare. Thus far, only six stand-alone and ATP-independent ligases have been characterized as compared to >4200 proteases. But peptide ligases are enormously useful because they are molecular staplers which enable site-specific bonding of chemicals, polymers, peptides and proteins to form new compounds or materials. Recently, we discovered such a "molecular stapler", a novel Asn/Asp (Asx)-specific peptide ligase named butelase1 from butterfly pea (BungaTelang). Butelase1 exhibits unmatched kinetics with catalytic efficiencies of up to 1,340,000 M-1 s-1 and >10,000 times faster than other known ligases [1, 2]. Our recently published work showed that butelase1 is useful for both intra-and intermolecular ligation, cyclizing or ligating efficiently various peptides and proteins ranging in size from 8 to >300 amino acids [2-7]. Importantly, butelase1 is C-terminus-specific for Asx, traceless, and accepts a tripeptide Asx-His-Val with the dipeptide His-Val as the leaving group. Butelase1 accepts most N-terminal amino acids with D-or L-configuration. Because of the mildness of the ligation reaction conditions, Butelase is applicable to labeling live cells and bacteria for biochemical and biological experiments. Thus, the high catalytic efficiency, broad substrate specificity and versatility (working with live cells) of butelase 1 could augment new applications, both in vitro and in vivo systems for basic and translational research. Here, we will present our latest results on Asx-specific ligases and their applications to explore new frontiers in biochemical, medical and material sciences. 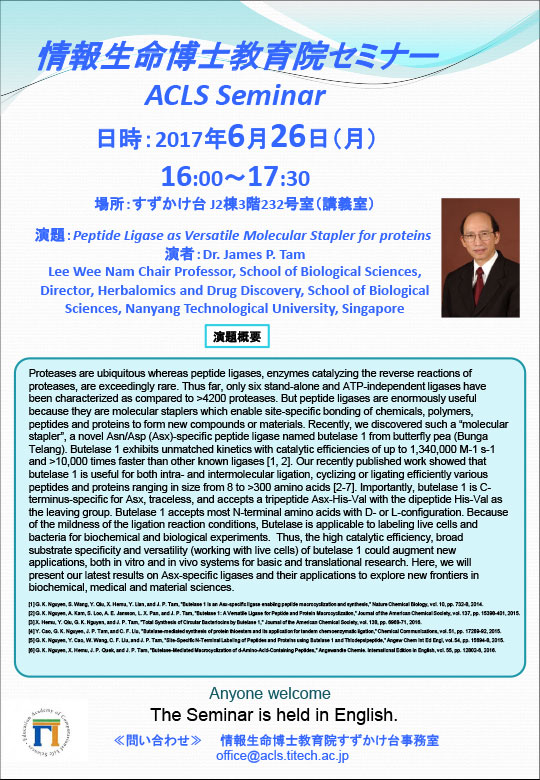