Jun-ichi Takada, professor at the Department of Transdisciplinary Science and Engineering and dean of the School of Environment and Society, has received the ITU Association of Japan Accomplishment Award. 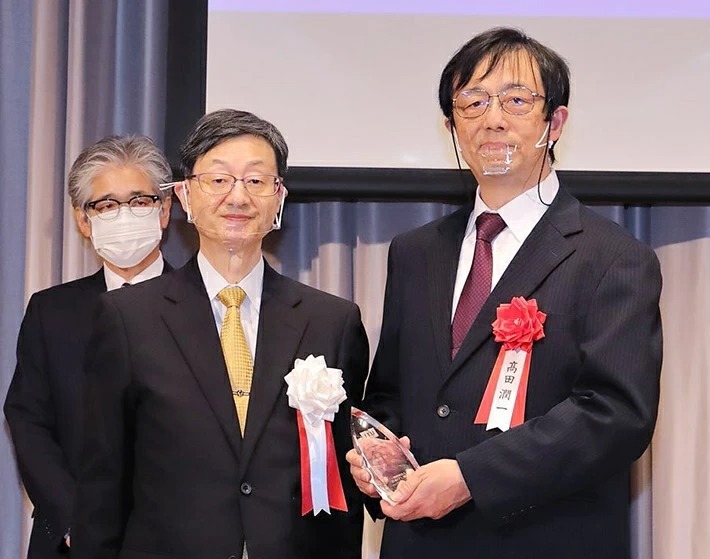 The ITU Association of Japan (ITU-AJ) was established to serve as a bridge between Japan and the world with regard to the various activities of ITU. The ITU-AJ Accomplishment Award is presented to individuals or organizations that have made significant contributions to the realization of the Declaration of Principles and Action Plan at the World Summit on the Information Society, to the activities of ITU and other organizations related to international standardization and international cooperation, and to the development of telecommunications and broadcasting in Japan.

The presentation ceremony was held on May 17, 2022, at the 54th Celebration of World Telecommunication and Information Society Day. Takada's achievements were stated as follows: "Professor Takada has been making highly regarded achievements in the world of academia, including his research and development of advanced frequency sharing technology between different systems, and contributions to the Information and Communications Council of the Ministry of Internal Affairs and Communications such as the Chair of the Advanced Mobile Communications Committee. In the area of international contribution, he has been involved in Japan International Cooperation Agency (JICA) international cooperation with developing countries since 1995, and has contributed to the development of the information and communications society by improving education and research at universities in several countries and fostering human resources."

More specifically, the advancement of dynamic frequency sharing technology between different systems was introduced this fiscal year in Japan, ahead of the rest of the world, in order to promote the social infrastructure of wireless communication systems and to make more effective use of scarce frequency resources. Takada contributed to the advancement of radio propagation prediction technology required for spatial spectrum sharing, and was also involved in the process of determining the conditions for sharing through dialogue with stakeholders.

Under the Information and Communications Council of the Ministry of Internal Affairs and Communications, Takada has participated in work and discussions on technical requirements for various radio systems, especially on coexistence conditions between different radio systems, at various levels such as committees, working groups, and technical examination services since 2002. He has been involved in the objective and constructive coordination of interests among stakeholders from a neutral standpoint as an academic expert.

In 1994, Takada was hired by the International Cooperation Center for Science and Technology at Tokyo Tech as a coordinator of the Japan Society for the Promotion of Science (JSPS) Core University Program for Scientific Exchange with South East Asian Countries. This led to his involvement in numerous JICA projects for higher education in engineering, and he has contributed to the expansion of undergraduate and graduate-level education and research activities in these regions. He is currently the chief advisor of the Project for Strengthening Engineering Education and Research for Industrial Development in the Kingdom of Cambodia, a field-wise coordinator of the Japanese supporting universities in the ASEAN Engineering Higher Education Network (SEED-Net) Project, and in charge of implementing the Project for Strengthening Engineering Human Resources for Industrial Development in Laos.

Comments from Professor Jun-ichi Takada, dean of the School of Environment and Society

I am very honored to receive the ITU-AJ Accomplishment Award., which is given not only for my research achievements but for my contributions to society. I am especially pleased that the award recognizes my longstanding contribution to cooperation in engineering higher education, as well as my commitment to the social implementation of technology in the field of wireless communications.

In 2001, I was transferred to the Department of International Development Engineering, and since the department at that time was promoting the development of human resources who can contribute to development cooperation, I decided to become a role model myself, and I have been working on cooperation in engineering higher education, again from the perspective of international development practice.

By jumping into this field at a young age without much experience, I was able to think together with my counterparts about the local situation while avoiding undesirable patterns in international cooperation, such as arrogance or one-sidedness. As a result, I was able to do a lot of good things. Joint research went well and we were able to coauthor papers with my peers. I could advise excellent students and young faculty members at graduate schools and those in short-term study abroad programs. Together, we were able to think about how to create new systems and organizations that were rarely experienced by young researchers at Tokyo Tech.

Tokyo Tech is known for its outstanding contributions to engineering higher education cooperation among national universities in Japan. I am grateful for the generous contributions of my senior professors, who I believe were the driving force behind my receiving the award. I hope that younger professors develop an interest in getting involved in similar opportunities.


※This article has been updated to correct a typographical error on August 29.