Hey there! We are the EE Homepage supporters.
In our course introduction series, we introduce courses characteristic of Electrical and Electronics Engineering in an easy-to-understand manner.
This time, we will introduce “Engineering Literacy”.

During 2019 4Q, as part of the compulsory class “Engineering Literacy” for first year students, a “Mini Electric Car Race” was held. 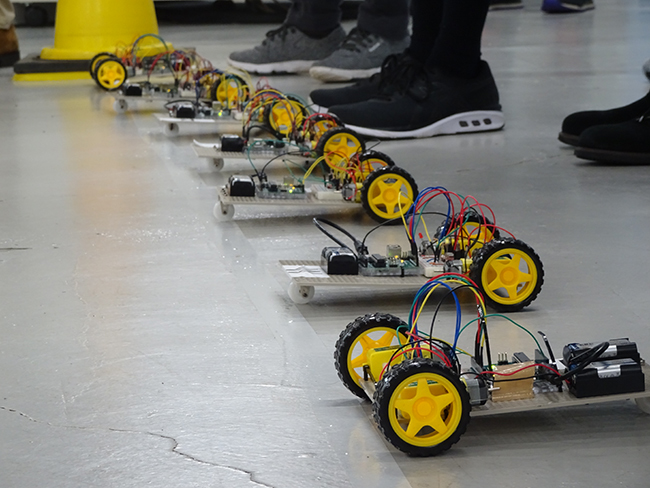 During the course “Engineering Literacy”, after learning the basics of building and programming, students get hands-on by building an actual mini electric car. During the last lesson, students race their cars against each other by controlling the cars with an iPod app. Of course, the controls are programmed by the students themselves.
Last year, students raced each other in the form of an individual competition, but the format changed this year to become a group competition. As with last year, each student still builds their own car and races it, but the winning team of 4 is decided based on the total number of points accumulated during each race. Due to the change to a group format, students showed more teamwork and cooperation when facing difficulties. The competition also became even livelier than before, reflected the teacher-in-charge.

After the race, we heard from the students on their thoughts.
There were students with hands-on experience but no programming experience, and others familiar with programming but unfamiliar with hands-on work, and as such this class was a learning experience for most of the students. Perhaps for this reason, the class received overwhelmingly positive feedback with students praising the class as “enjoyable” and “interesting”.
We interviewed a student who was able to place third in the race despite being completely new to programming. “The programming skills and understanding of logic circuits that we learnt in (the lecture) ‘Computer Science’ were really useful,” she said. In this manner, through the hands-on experience in ‘Engineering Literacy’, students also came to appreciate the practical applications of knowledge learnt in school.
We also heard from a member of Group B, which finished overall second in the competition. “I actually own an Arduino, so I was able to do the programming pretty well, but I think I could’ve done better if I understood the serial communication(the process in which data is sent from the application to the microcomputer),” he reflected.

We could feel the students’ enthusiasm in the way they continued to mull over what they could improve on even after the race was over. By teaching students to create a car from scratch with their own two hands, “Engineering Literacy” teaches students what engineering is really about. I am sure that this experience of building a car will inspire our students to create even grander projects!