Fifteen out of about 140 Electrical and Electronic Engineering students presented excellent master thesis and received this award. Interview with the winners. 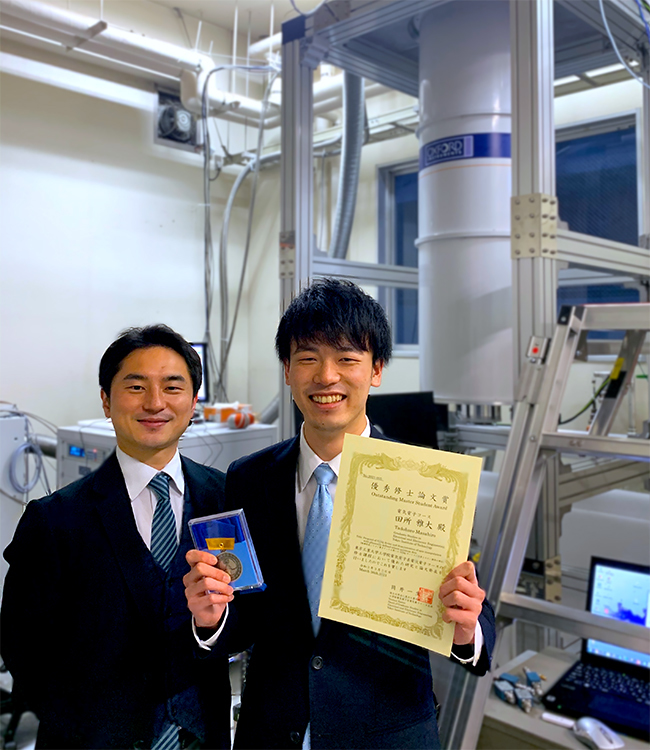 Masahiro Tadokoro (right) and Associate Professor Tetsuo Kodera (left).
The equipment at the back right is the cryogenic refrigerator used in the research.

What is the content of your research and how do you expect it to benefit the world?

The main goal of my research is to realize a NISQ device, a kind of quantum computer, using physically-defined silicon quantum dots (QDs). Quantum computers are the next generation of computers that use the principles of quantum mechanics to perform calculations that cannot be solved by conventional computers. Quantum computers are expected to find applications in a wide range of fields, including finance, drug discovery and machine learning, and are regarded as a technology that would make significant impact to the society.

There are several types of quantum computers, among which the NISQ devices are intermediate-scale quantum computers with no error correction function. Although they do not have enough computation power to be directly applied to real-world applications, they are still considered to outperform conventional computers in certain calculations.
The basic element of a quantum computer, the qubit, can be constructed in various systems, however in our group, Kodera Laboratory, we focus on spin qubits. Spin qubits are based on the spin of an electrical charge, and can be realized by confining the charge to QD, which is a small box on the order of nm.

Comments on the award

I am very honored to receive such a wonderful award. I would like to express my sincere gratitude to my professors, laboratory staff, collaborators and my family for their continuous support and encouragement. I would like to take this opportunity to express my sincere gratitude.
I joined the Kodera Lab as one of the founding members in my fourth year of undergraduate studies. At that time, I had never even heard of a word “quantum computer”, but I remember that I strongly sympathized with Prof. Tetsuo Kodera's grand dream and passion for quantum computers, and decided to apply for joining. I was given many valuable opportunities to collaborate with various people both inside and outside of the university, based on the principle that "the fusion of a wide range of research fields is important for the realization of a quantum computer". I also learned a lot about organizational culture and management in the process of setting up our laboratory. I feel that these experiences have made me mature. I am very grateful to Prof. Kodera for providing me with such a valuable opportunity.
In the six years I spent at Tokyo Tech, I had many more valuable experiences than I could have imagined as a high school student. I would like to make the most of what I have learned and contribute to society with new technologies.