The issue of battery usage inefficiency in electric vehicles resulting from an inaccurate battery charge measurement may finally get resolved, thanks to a diamond quantum sensor prototype developed in the MEXT Q-LEAP Flagship project with researchers from Tokyo Tech and Yazaki Corporation. The sensor can measure currents in a wide range as well as detect milliampere-level currents in a noisy environment, improving the detection accuracy from 10% to within 1%. 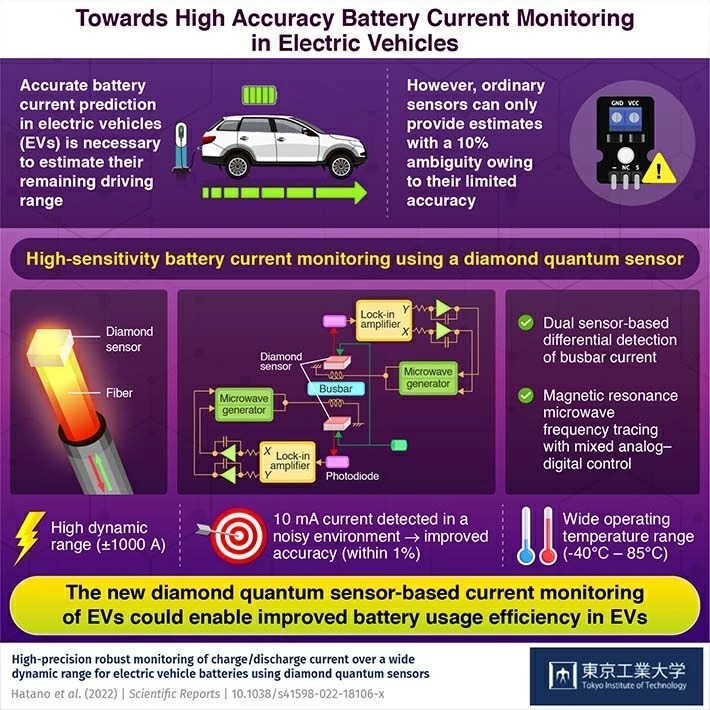 The popularity of electric vehicles (EVs) as an environmentally friendly alternative to conventional gasoline vehicles has been on the rise. This has led to research efforts directed towards developing high-efficiency EV batteries. But, a major inefficiency in EVs results from inaccurate estimations of the battery charge. The charge state of an EV battery is measured based on the current output of the battery. This provides an estimate of the remaining driving range of the vehicles.

Typically, the battery currents in EVs can reach hundreds of amperes. However, commercial sensors that can detect such currents cannot measure small changes in the current at milliampere levels. This leads to an ambiguity of around 10% in the battery charge estimation. What this means is that the driving range of EVs could be extended by 10%. This, in turn, would reduce inefficient battery usage.

Fortunately, a team of researchers from Japan, led by Professor Mutsuko Hatano from Tokyo Institute of Technology (Tokyo Tech), has now come up with a solution. In their study published in Scientific Reports

, the team has reported a diamond quantum sensor-based detection technique that can estimate the battery charge within 1% accuracy while measuring high currents typical of EVs.

"We developed diamond sensors that are sensitive to milliampere currents and compact enough to be implemented in automobiles. Furthermore, we measured currents in a wide range as well as detected milliampere-level currents in a noisy environment," explains Prof. Hatano.

In their work, the team made a prototype sensor using two diamond quantum sensors that were placed on either side of the busbar (electrical junction for incoming and outgoing currents) in the car. They then used a technique called "differential detection" to eliminate the common noise detected by both the sensors and retain only the actual signal. This, in turn, enabled them to detect a small current of 10 mA amid background environmental noise.

Next, the team used a mixed analog-digital control of the frequencies generated by two microwave generators to trace the magnetic resonance frequencies of the quantum sensor over a bandwidth of 1 gigahertz. This allowed for a large dynamic range (ratio of largest to smallest current detected) of ±1000 A. Moreover, a wide operating temperature range of −40 to +85°C was confirmed to cover general vehicular applications.

Finally, the team tested this prototype for Worldwide Harmonized Light Vehicles Test Cycle (WLTC) driving, a standard test for energy consumption in EVs. The sensor accurately traced the charge/discharge current from -50 A to 130 A and demonstrated the battery charge estimation accuracy within 1%.

What are the implications of these findings? Prof. Hatano remarks, "Increasing battery usage efficiency by 10% would reduce battery weight by 10%, which will reduce 3.5% running energy and 5% production energy of 20 million new EVs in 2030 WW. This, in turn, corresponds to a 0.2% reduction in CO2 emissions in 2030 WW transportation field."

We certainly hope this breakthrough takes us one step closer to a carbon neutral society!