Just Listen to the Chaos: A New Approach to Extracting Information from Large Ensembles of Sensors

Engineers at the Tokyo Institute of Technology (Tokyo Tech) have found a new approach for combining data acquired wirelessly from a large number of sensors. The technique is based on considering the "ensemble spectrum" of the sensors, which simply involves analyzing the radio signal received from all the sensors without synchronizing them to each other or separating their individual contributions. It consists of connecting each sensor to a chaotic oscillator, which generates a transmitted signal that contains frequencies that depend on the measured value. By considering the superposition of the signals in terms of its spectrum via a small neural network, it is possible to estimate aspects of the measurement's statistical distribution, such as the average, over the population of sensors. Since it simplifies a key aspect of "distributed sensing," this technology has many possible applications in environmental, structural, and biomedical monitoring.

Many human endeavors in modern society are based on the expectation that the better we can control the world around us, the superior our outcomes from particular activities are. Recently, this has led to ideas like precision agriculture, which promises to optimize resource usage and, consequently, improve sustainability. Successful control requires high-quality, reliable measurements of process variables, such as, in the case of agriculture, temperature, solar irradiation, and soil moisture.

Over centuries, engineers and physicists have perfected our ability to make highly accurate measurements, but in many emerging applications, the challenge is a little different from the usual. That is to say, the requirement is not the measurement of something at a particular location or time point as accurately as possible. Instead, what is required is the estimation of statistical properties over a relatively large surface, in a way that places less emphasis on the precision of individual readings but necessitates many measurements. For example, in vineyards, the average and variance of solar irradiation over a large plot of land may be determined to inform the choice of grape. Another example could be from the field of construction, where civil engineers are seeking information on the distribution of stress over large structures, such as concrete pillars, more and more frequently.

The technique of making measurements using many sensors scattered over an area or object of interest is often referred to as "distributed sensing." One of its most significant challenges is that reading out data from each individual sensor requires considerable infrastructure and power and is, therefore, quite wasteful. It would be better if the sensors, which could number between the tens and the thousands, could directly interact with each other, eventually "coming to an agreement" over the final output to report. Like people in a room, one could then ask just one person about the consensus rather than questioning them all. About two years ago, scientists from the Tokyo Institute of Technology proposed using "chaotic oscillators" for this purpose. Chaotic oscillators are very simple circuits gifted with the peculiar ability to generate complex behaviors, separately and collectively, and they can be realized even with single transistors. The possibility of "coupling" them wirelessly and making them interact with each other to achieve a collective measurement of light intensity was demonstrated in a pilot experiment involving a limited number of sensors placed over a small surface within the laboratory [1].

When considering real applications, the requirement of having sensors interact with each other becomes physically challenging to meet. The chaotic oscillators would need to be coupled over considerably longer distances, such as several meters or more, mutually exchanging enough energy to stay in sync while obeying all the regulatory requirements of radio usage. Although retaining the idea of a kind of "collective intelligence" in distributed sensing is compelling, eventually the conditions seem to result in circuits that are more complicated than initially assumed. "Then, one morning, while listening to the chirping of cicadas, I had an idea for quite a different approach to this problem. I realized that we are quite good at noticing differences in sounds, even when these come from the disorderly overlap of many sources that are not in any way synchronized to each other", says Dr. Ludovico Minati, the lead author of the study. Indeed, situations of highly synchronized activity such as the simultaneous flashing of fireflies on a tree are quite rare and attract considerable marvel. There is much information to be extracted from just listening to many sources, even when these are incoherent. "As everyone living close to a busy street can attest to, unrelated sources do not just cancel each other out. Even visually, we can easily pick up differences in frequency regardless of whether there is a fixed phase relationship between multiple sources or not," he adds (Fig. 1). 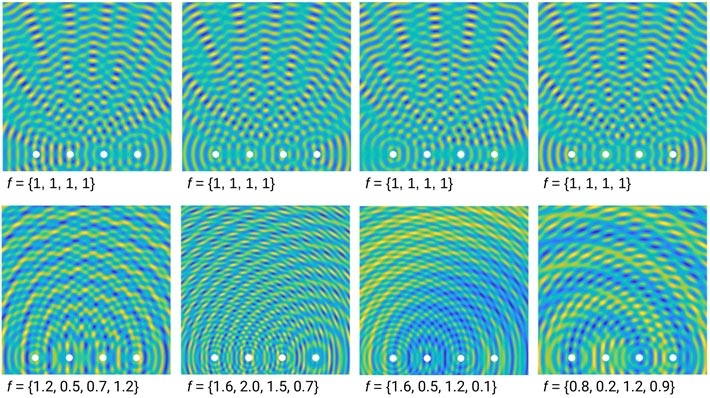 Figure 1. Effects of frequency and phase on overlapping waves

Based on this simple idea, the engineers from Tokyo Tech considered another approach to distributed sensing, wherein each node simply emits a chaotic signal whose frequency content depends on the measured value. Assuming the relationship between the two to be sufficiently rich and unique, making reasonable guesses about the statistical distribution of the values becomes possible based on just receiving the signal from the entire ensemble of sensors. This approach, while not free of some limitations, could make the design of each sensor considerably simpler. Furthermore, it can be implemented easily by using a neural network to "decode" the received frequency spectrum (Fig. 2). "A very simple chaotic oscillator could be used to generate a suitable signal for transmission. We had previously developed a chaotic oscillator of the same type in our laboratory, but now we have considerably improved its power consumption and operation frequency, achieving approximately 2 mW and 4 GHz, respectively," explains Dr. Hiroyuki Ito, head of the Nano Sensing Unit where the device prototype was built [2]. 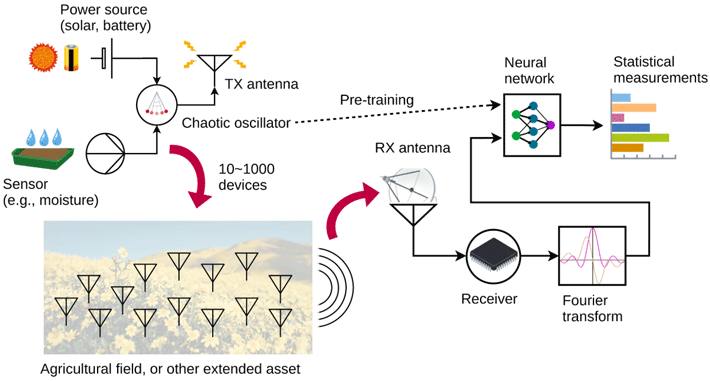 Depending on the externally supplied voltage, this circuit generates a beautifully intricate pattern of frequencies (Fig. 3), whose main features remain discernible even when the outputs of many sensors—each measuring a slightly different value—are overlapped. Therefore, it is possible to train a small neural network that can be implemented on a low-power device to make an educated guess about the underlying values. "One remarkable thing is that this approach seems to work acceptably well even when considering relatively small frequency windows, effectively taking slices of the spectrum pattern we have observed. That should help with future implementation in terms of antenna and amplifier design," adds Dr. Korkut Kaan Tokgoz from the same laboratory. 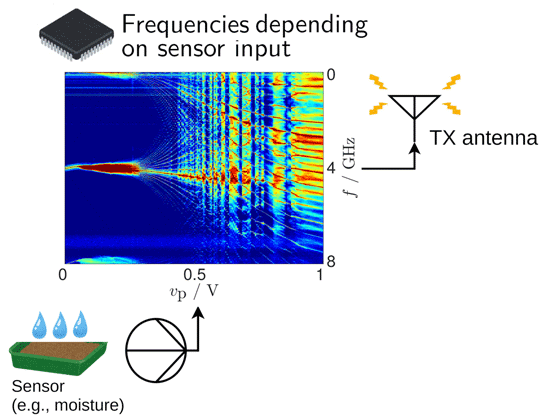 The researchers plan to take the work forward by designing a complete sensor suitable for testing outside the laboratory, and eventually experimenting in the field with applications such as precision irrigation. The theory underlying the proposed approach, circuit design, and results are carefully detailed in the article that has recently appeared in the journal, Chaos, Solitons & Fractals [3].