Nippon Telegraph and Telephone Corporation (NTT), in collaboration with Fumio Koyama, professor at the Laboratory for Future Interdisciplinary Research of Science and Technology, Tokyo Institute of Technology, has developed an ultra-highspeed membrane laser[1] that uses an indium-phosphorus compound semiconductor[2] on a silicon carbide substrate[3] with high thermal conductivity. This laser, the world's first directly modulated laser with a 3-dB bandwidth[4] exceeding 100 GHz, can transmit at 256 gigabits (256 billion bits) per second over a distance of 2 km in a single-mode fiber.

Directly modulated lasers are now widely used in data center[5], but their modulation speed is limited, which has been a problem for further increasing in transmission capacity. These results will enable us to respond to the expected increase in traffic with a low-cost and low-power-consumption solution and will contribute to the realization of a high-capacity optical transmission infrastructure that supports NTT's IOWN[6] concept.

This research was reported in Nature Photonics on October 19, 2020.

Data traffic will continue to increase in the future, especially in data centers where data is concentrated. Therefore, it is essential to increase the capacity of optical interconnections[7] that connect servers. Moreover, the increase in power consumption in data centers must be suppressed, so it is important to reduce the power consumption of optical interconnects. Currently, directly modulated lasers are widely used in data centers because of their low power consumption and low cost. However, since they use intensity modulation, in which the light (photons[8]) output varies in proportion to the current (carrier[9]) injected into the laser, their modulation speed is limited by the relaxation oscillation frequency[10], which is the interaction between carriers and photons. Figure 1 shows the evolution of the 3-dB bandwidth for directly modulated lasers over the last 30 years. In the 1990s, the performance of the laser active layer[11] was improved, resulting in a 3-dB bandwidth of about 30 GHz, but no significant progress has been made since then. 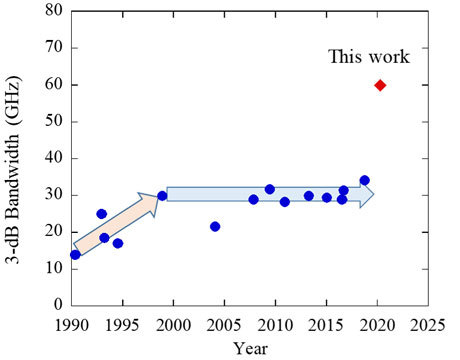 Since further improving the performance of the active layer is considered to be difficult, photon-photon resonance has attracted attention as an additional speed-up method. In this method, when the frequency detuning between the lasing mode[12] and the adjacent cavity mode[13] coincides with a specific modulation frequency, the sideband[14] generated by the intensity modulation is enhanced. Figure 2 shows the change in the 3-dB bandwidth when photon-photon resonance is applied. Up to now, a 3-dB bandwidth of 55 GHz has been achieved, and PAM4 signal modulations[15] at 112 gigabits per second have been demonstrated. 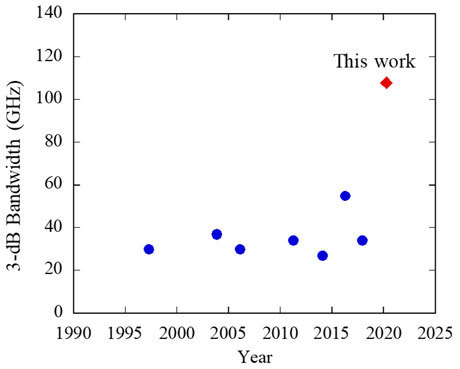 To increase the relaxation oscillation frequency, NTT researchers focused on the optical confinement factor of the active region and developed a membrane laser on a silicon (Si) substrate with a thermal oxide film (SiO2). Membrane lasers have a large optical confinement factor in the active region and are compact, making it possible to realize directly modulated lasers with low power consumption. On the other hand, since the device is fabricated on a low-thermal-conductivity SiO2 layer, the temperature increase in the active layer due to current injection is large, and even if the current is increased, the relaxation oscillation frequency saturates at about 20 GHz due to saturation of the differential gain.

To suppress the increase in the active region temperature, we fabricated an indium-phosphorus (InP) based membrane laser on a silicon carbide (SiC) substrate (Fig. 3), which has a thermal conductivity approximately 500 times higher than that of SiO2. Since SiC has a lower refractive index than InP, the optical confinement factor is almost the same as that of the device on SiO2. The device was fabricated by direct bonding with ultrathin (40 nanometers) SiO2 between the InP and SiC substrate. Assuming a 100-mW heat source, the temperature increase in the active region of a membrane laser with an active layer length of 50 micrometers was significantly reduced from 130.9 to 16.8˚C when the SiO2 thickness was reduced from 2 micrometers to 40 nanometers (Fig. 4). The current at which the relaxation frequency reaches its maximum was 5.5 mA for the device fabricated on SiO2/Si substrate. In contrast, with the device fabricated on SiC substrate, we were able to increase the current to 30 mA and obtain the world's highest relaxation frequency of 42 GHz and 3-dB band of 60 GHz (Fig. 5). 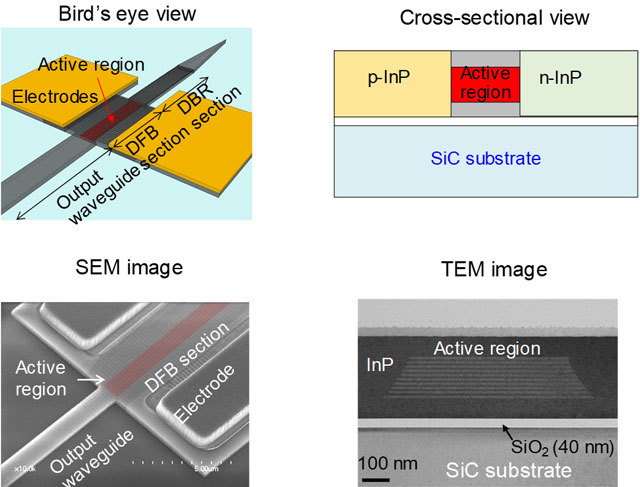 Figure 3. Schematic diagrams of device and SEM and TEM images of fabricated device. 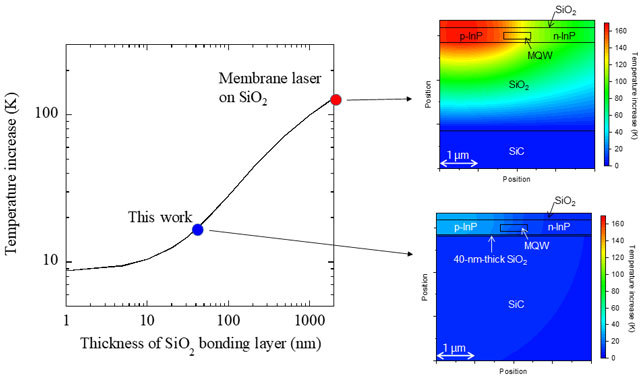 Figure 5. Lasing spectrum and small-signal responses of the device without reflection at the facet.

In addition, using optical feedback from the end facet of the output waveguide, we designed a device in which photon-photon resonance occurs at around 95 GHz. As a result, we obtained a 3-dB bandwidth of 108 GHz (Fig. 6) and succeeded in generating a 256 gigabit (256 billion bit) PAM4 signal and transmitting it over a distance of 2 km (Fig. 7). 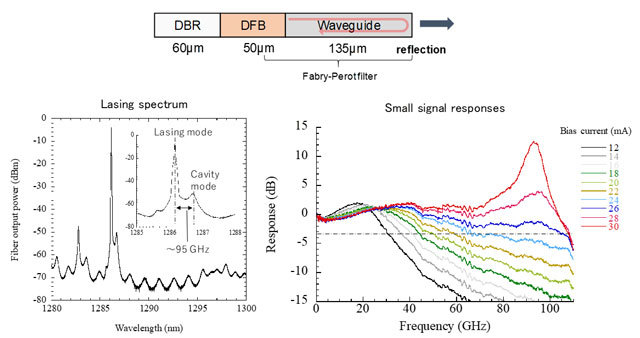 Figure 6. Lasing spectrum and small-signal responses of the device with reflection at the facet. 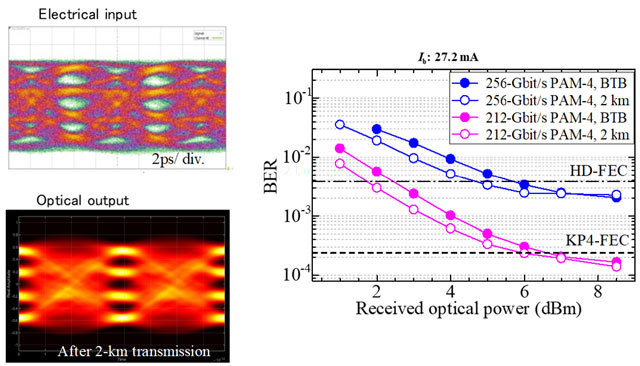 The future will see the development of transmitters capable of handling the next generation of Ethernet standards with transmission capacity exceeding 1 terabit with four or eight arrays. The simultaneous achievement of low power consumption is expected to suppress increases in the power consumption of data centers and supercomputers due to the anticipated increase in data volume.

As shown in Fig. 3, the membrane laser is a laser with total thickness of about 300 nm (1/10 that of conventional lasers) made on a low-refractive-index material. The active region is embedded in the InP layer, and a lateral current injection structure is formed. Since the membrane laser is sandwiched between low-refractive-index layers, light (photons) generated in the active region is strongly confined in it. In addition to this, since the injected carriers are also tightly confined in the active layer, low power consumption and high-speed modulation of direct modulation lasers can be expected. Figure 8 shows the optical mode field in membrane lasers on SiO2 and SiC. As shown in the figure, although SiC has about 500 times the thermal conductivity of SiO2, the optical confinement is similar.

Figure 8. Optical mode fields of the devices on SiO2 and SiC.

SiC and InP are directly bonded to SiO2 using oxygen plasma. Although SiO2 provides good bonding strength, it is important to make it as thin as possible due to its low thermal conductivity. To prevent peeling of the film due to out-gas generated when the temperature rises after bonding, we succeeded in forming a groove in the substrate. 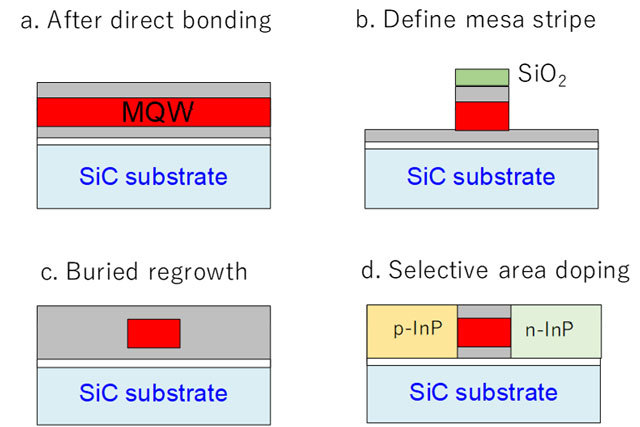 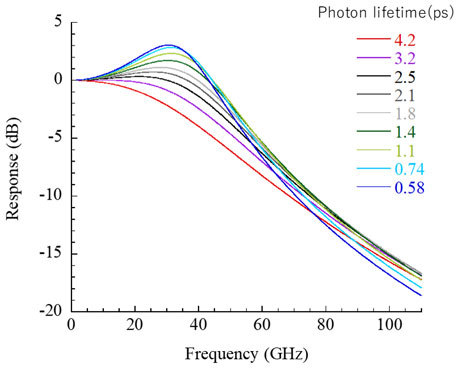 [1] Membrane laser : A thin-film laser surrounded by a low refractive index material such as air or SiO2

[4] 3-dB bandwidth : In the frequency response characteristics of the device, the frequency at which the modulation amplitude decreases by 3 dB (in half) when the device is modulated from a low frequency to a high frequency.

[5] Data center : A facility that contains equipment such as servers that store data on the Internet and routers that control the communication between servers. With the progress of the Internet, huge data centers are required, and their power consumption becomes a problem.

[7] Optical interconnection : A method of connecting devices by converting electrical signals into optical signals, for which a semiconductor laser is used. By using optical fiber with low loss and high bandwidth, the signal can be transmitted and received with lower power consumption than signal transmission by the electricity.

[8] Photons : Particles of light emitted when electrons and holes recombine.

[10] Relaxation oscillation frequency : When a pulsed current is injected into a laser, a large number of photons are generated, and laser oscillation occurs due to the rapid increase in carriers in the laser resonator. The photons in the cavity generate stimulated emission, resulting in carrier reduction. As the carriers decrease, the photons decrease, causing temporal variations in the optical output. The frequency of this oscillation is called the relaxation oscillation frequency, which is a major factor limiting the speed of direct modulation of the laser.

[11] Laser active layer : The region where carriers are injected and photons are generated. In indium phosphorus compound semiconductors, the emission wavelength of the laser is obtained by adjusting the content of Ga, Al, As, etc.

[13] Cavity mode : In order to obtain laser oscillation, the phase of the light traveling around the resonator must match the initial value due to the nature of light as a wave. This matching wavelength is called the cavity mode.

[14] Sideband : When the laser is intensity-modulated at a certain frequency, the oscillation spectrum broadens. In this case, a peak that appears at a frequency difference corresponding to the modulation frequency is generated on the low-frequency side and high-frequency side.

[16] FEC (Forward Error Correction) : FEC adds a code on the sender side correct errors that occurs when transmitting data, and detects and corrects errors on the receiver side. As the number of codes to be added increases, the amount of data that can be error-corrected increases, but the cost increases. HD-FEC uses 7% of the total number of bits as the error correction code, and KP4-FEC uses 5.8%.