From a rack-mount system toward a microchip

A research group that includes Motoaki Hara, Senior Researcher at the National Institute of Information and Communications Technology (NICT, President: Hideyuki Tokuda, Ph.D.), developed a simple miniaturized atomic clock1system, which does not require a complicated frequency multiplication2, as an outcome of a collaboration with Professor Takahito Ono of Tohoku University (President: Susumu Satomi) and Associate Professor Hiroyuki Ito of Tokyo Institute of Technology (President: Yoshinao Mishima).

We propose a new microwave generator that exploits thickness extensional (TE) vibration in a piezoelectric thin film3to miniaturize an atomic clock. The TE mode is suitable for mechanical resonance at GHz frequencies, and can be synchronized directly to atomic resonance. Frequency multipliers and off-chip quartz oscillators, which are space- and power-hungry circuit blocks, are no longer necessary in the system. Furthermore, we originally developed a micro machined cell for alkali metal atoms to reduce the size and cost using a batch photo-fabrication. Consequently, we achieved a remarkable improvement in frequency stability. By transferring this technology into practical products, atomic clocks, which are deployed in high-end systems such as satellites or base stations, can be incorporated on smart phones. 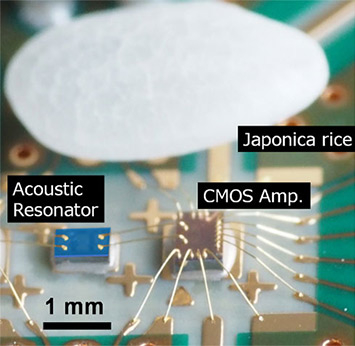 An atomic clock is a frequency standard based on the transition frequency of atoms and is deployed in high-end systems such as satellites or base stations owing to its remarkable precision and stability. Moreover, it is also used to generate the Japan Standard Time (JST) disseminated from NICT. From the viewpoints of uniformity and robustness of synchronization in communication networks, atomic clocks should be deployed to low-end systems with the further improvement of frequency instability. Ideally, it is preferable that all terminals have an atomic clock. However, its size is currently rack-mount-scale and it has poor portability. A A module-sized atomic clock 4is currently being developed in the US and Europe. However, it is still too large to incorporate in consumer devices such as smartphones.

Most of the board area and power of compact atomic clocks are consumed to generate and control the microwaves. A microwave generator is stabilized by referring to the clock transition frequency of alkali metal atoms ( rubidium5 or cesium) in the atomic clock system. The microwave is conventionally generated by several multiplications of the reference frequency from the off-chip quartz oscillator.

It is difficult to find a compact and stable oscillator in the GHz region. Therefore, the output of rather unstable LC oscillators in ～GHz is normally stabilized to a low-frequency crystal oscillator (～MHz) after a frequency division of 100 times or more. Various modes of mechanical vibrations, on the other hand, are utilized in recent electronics, such as resonant pressure sensors, vibrational gyroscopes, or quartz clocks. Among them, the thickness extensional (TE) mode is known to be suitable for high-frequency applications. The resonant frequency of the TE mode can be controlled in GHz frequencies these days owing to the progress of piezoelectric thin-film technologies. Exploiting the TE mode, we have developed a microwave generator directly oscillating in the clock transition frequency of 87Rb (3.4 GHz) without frequency multiplications. This technology has a considerable impact on the reduction of size and power. In comparison with a module-sized atomic clock, the chip area and power consumption could be reduced by 30% and 50%, respectively.

In the atomic clock, the transition frequency of alkali atoms is used as a frequency standard. The alkali atoms should be vaporized and sealed in a transparent container for optical interrogation. So far, glass tubes have been used as the container. However, it does not have room for further reduction in the package size and cost. Here, we have developed an original silicon-based microcell in which the Rb gas is contained. Our cell is fabricated by a wafer-level photo process and suitable for mass production. The cell was incorporated into a feedback loop to stabilize the frequency of the microwave generator that we developed, and we achieved atomic clock operation. As a result, the short-term frequency instability reached the 10-11 level at an averaging time of 1 s. It is superior to that of the commercialized module-sized atomic clock by over one order of magnitude.

Our approach could remarkably reduce the size, cost, and power consumption of atomic clocks deployed to high-end systems such as satellites or base stations. Transferring this technology to practical applications will make it possible to incorporate the atomic clock into smartphones or other wireless devices. This will not only improve the convenience of wireless communication, but also provide some enhancements for novel applications, for example, the synchronization of big data gathered from an extensively deployed wireless sensor network or the autonomous control of unmanned robots with excellent robustness against GPS interruption, spoofing, solar storms, or multireflection from buildings.

Following the simplification of the microwave generator that we described above, we will attempt to simplify a digital control unit until about FY 2019. A micro gas cell integrated with an optical system for high-density packaging will also be developed in the same year. By achieving these tasks, we will accelerate the development of the first sample proposal of an atomic clock chip. This achievement will be reported at the world's largest conference in the field of MEMS (Micro-Electromechanical System)6, namely, the 31st IEEE International Conference on Micro Electro Mechanical Systems (MEMS2018) (January 21-25, 2018, Belfast, UK).

1 Atomic Clock: An atomic clock is a frequency or a time standard based on atomic resonance. Extreme stability of frequency is obtained by the stabilization of a microwave oscillator with the hyperfine transition of alkali metal atoms. The following image is a rack-mount-type atomic clock, which is used to generate the Japan Standard Time (JST) in NICT. 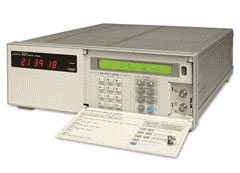 2 Frequency Multiplication: A frequency multiplication is an operation to generate harmonics (multiple) of a reference frequency. Generally, by obtaining the reference from a quartz oscillator with good frequency stability, a higher frequency is generated by phase-locked loop (PLL) circuitry.

4 Module-Sized Atomic Clock: It is an atomic clock module using the Coherent Population Trapping (CPT) spectrum to optically interrogate the electron transition with ease. This module was developed in the US, and has begun to be used in some oceanographic surveys. 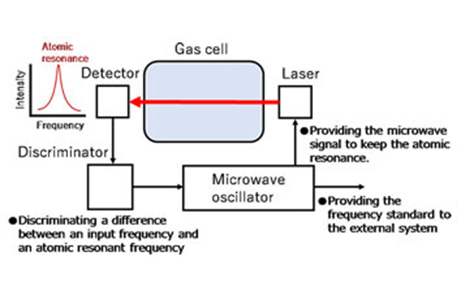 5 Rubidium: Rubidium is an alkali metal element with a hyperfine transition in the microwave band comparable to that of cesium, which is used to define the second. Natural rubidium was confined in the microcell here. It comprises two isotopes: 85Rb and87Rb.

6 MEMS: Micro-Electromechanical System: It means either devices integrated with mechanical parts, sensors, and an electronic circuit on one substrate, or the fabrication technologies for such devices.

Nowadays, there has been considerable interest in the miniaturization of atomic clocks to apply them to portable devices. In this study, a 3.5-GHz-band thin-film bulk acoustic resonator (FBAR) was employed as a frequency reference instead of the bulky quartz-based resonator. By applying the 3.5-GHz-band FBAR to the voltage-controlled oscillator (VCO), a clock frequency of 87Rb (fclock/2=3.42 GHz) can be directly generated, reducing the cost, size, and power consumption of a microwave generator by eliminating the phase-locked loop (PLL). Moreover, we developed MEMS-based Rb gas cells, where the diameter and length of the cylindrical cavity were both 3 mm, and demonstrated coherent population trapping (CPT) resonance. By incorporating the FBAR-VCO into the feedback loop of this CPT system, a sustained clock operation was successfully achieved with a frequency stability of 2.1×10-11at 1 s.

A chip-scale atomic clock (CSAC) was sensationally reported in 2004 and commercialized in 2011. However, it still contains many chips inside. The cost, size, and consumed power have not yet reached the same level as those of the chip components used in consumer devices such as feature phones or wireless sensor nodes. Most of the board area and power in the CSAC are consumed by a microwave generator. In particular, a complicated PLL system including quartz resonators or multipliers is a major source of power consumption.

For the direct generation of the clock frequency with a VCO, a 3.5-GHz-band micromechanical resonator was used as a frequency reference instead of the MHz-band quartz resonator. AlN-based FBARs, which have a high Q-factor and an adequate coupling coefficient among the mechanical resonators, were used in this study. 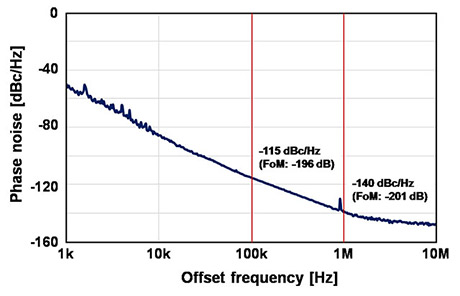 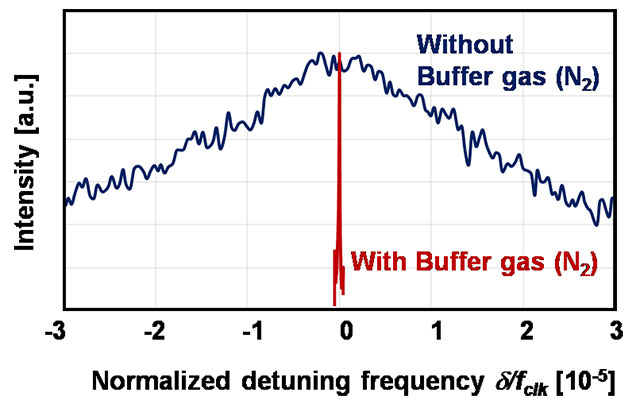 Figure 4 shows the characteristics of the fabricated FBAR-VCO. It oscillated around 3.4 GHz with a phase noise of 140 dBc/Hz and FoM of -201 dB at the offset frequency of 1 MHz. Figure 5 shows the CPT resonances of 87Rb in the MEMS gas cells. By stabilizing the FBAR-VCO frequency to the CPT resonance of 87Rb atoms contained in a MEMS cell, the frequency stability of the FBAR-VCO reached 2.1×10-11at 1 s (Fig. 6). This value is a top-level performance of the short-term frequency stability among the CPT-based atomic clocks using the micromachined gas cell. 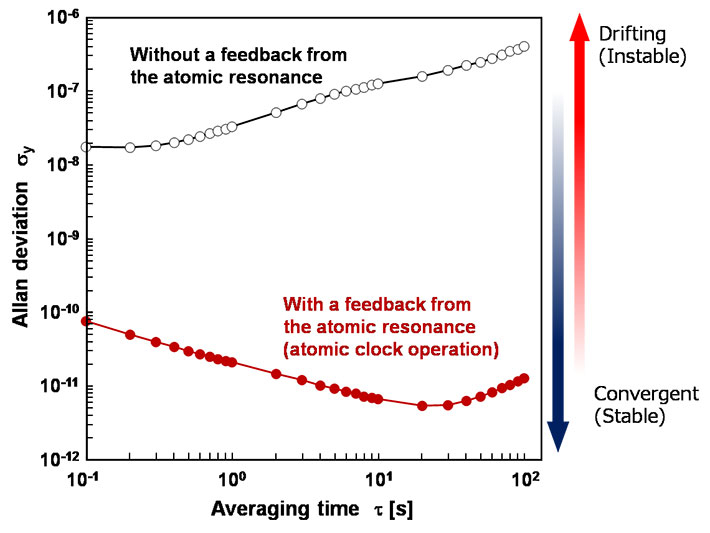 Laboratory for Future Interdisciplinary Research of Science and Technology (FIRST)