A research group including members from Tokyo Institute of Technology (Tokyo Tech) and Japan Society for the Promotion of Science have developed a real-time fiber-optic distributed sensing system for strain and temperature. The system requires light injection from only one end of the fiber and can achieve a sampling rate of 100 kHz, an improvement of over 5,000 times the conventional rate.

Aging degradation and seismic damage of civil infrastructure pose a serious problem for society. One promising technology for monitoring the condition of structures is optical fiber sensing. By embedding long optical fibers into a structure, strain and temperature distributions along the fibers can be detected. Among the various types of optical fiber sensors, distributed strain and temperature sensors based on Brillouin scattering have received much attention due to their high sensitivity and stability. In particular, Brillouin optical correlation-domain reflectometry (BOCDR), which operates based on the correlation control of continuous lightwaves, is known to be an intrinsically one-end-access distributed sensing technique with high spatial resolution (< 1 cm). However, the highest sampling rate reported for BOCDR was 19 Hz, resulting in a relatively long total time of distributed measurement (from several tens of seconds to several minutes). Seeking to resolve this shortcoming, researchers Yosuke Mizuno and Kentaro Nakamura from Tokyo Tech, Neisei Hayashi, a Japan Society for the Promotion of Science fellow from the University of Tokyo, and their collaborators recently succeeded in increasing the sampling rate of BOCDR to 100 kHz, over 5,000 times the previous rate, enabling real-time distributed measurement. Their study is published in the December 2016 issue of Light: Science & Applications.

In all Brillouin sensors, the strain and temperature dependence of the Brillouin frequency shift (BFS) is exploited to derive strain and temperature. In conventional BOCDR, the BFS is obtained by performing a frequency sweep over the whole Brillouin gain spectrum (BGS) using an electrical spectrum analyzer. Thus, the sweep speed of the spectrum analyzer limits the sampling rate to 19 Hz. By instead sweeping the frequency spectrum using a voltage-controlled oscillator, the researchers were able to achieve a higher-speed acquisition (Fig. 1(a)). However, deriving the BFS from the BGS still limited the sampling rate. To speed up the system further, the BGS was converted into a synchronous sinusoidal waveform using a band-pass filter, allowing the BFS to be expressed as its phase delay. Then, using an exclusive-OR logic gate and a low-pass filter, the phase delay was subsequently converted into a voltage, which was directly measured (Fig. 1(b)). 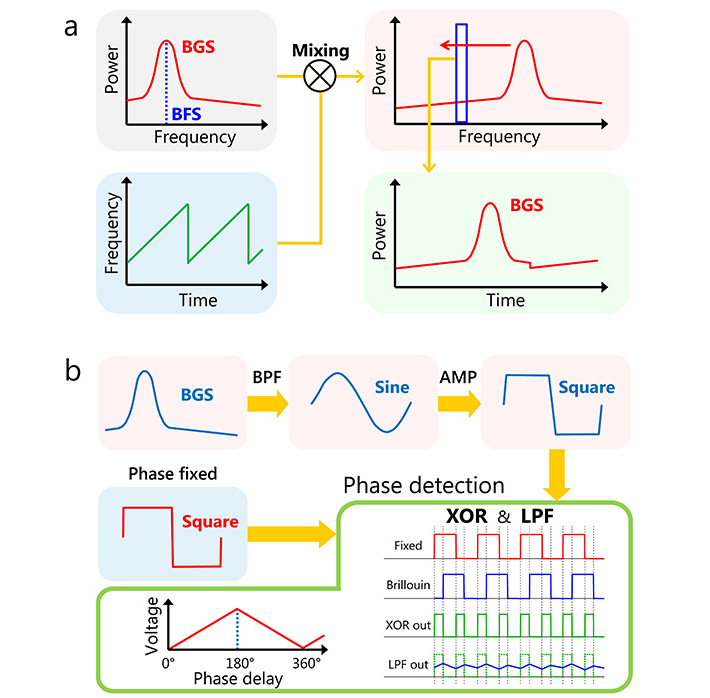 Figure 1. Principles of high-speed acquisition of Brillouin gain spectrum (BGS) and Brillouin frequency shift (BFS). (a) BGS acquisition. By mixing with a frequency-swept microwave, the BGS originally observed in the frequency domain can be obtained in the time domain at high speed. (b) BFS acquisition. The BGS is approximated by a one-period sinusoidal waveform and rectified. Its phase delay, which corresponds to the BFS, is then detected using an exclusive-OR (XOR) logic gate and a low-pass filter (LPF). The output voltage is in one-to-one correspondence with the phase delay in the range from 0 to 180°.

A strain sampling rate of up to 100 kHz was experimentally verified by detecting a 1-kHz dynamic strain applied at an arbitrary position along the fiber. When distributed measurements were performed at 100 points with 10 times averaging, a repetition rate of 100 Hz was verified by tracking a mechanical wave propagating along the fiber (Fig. 2). Thus, the researchers were the first to achieve one-end-access real-time distributed Brillouin sensing. A video demonstration of the system is available online (Single-end-access real-time distributed strain sensing - YouTube 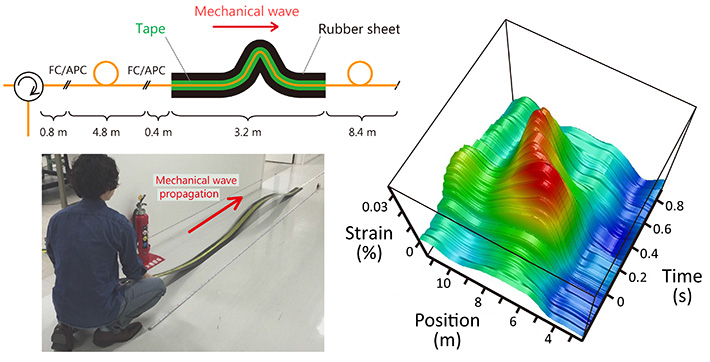 Figure 2. Tracking of a propagating mechanical wave. Schematic structure and photograph of the fiber under test, and the measured temporal variation of the strain distribution.

The sensing system is anticipated to be of benefit in monitoring the health of various structures, ranging from buildings and bridges to windmill blades and aircraft wings. The system also has potential applications in robotics, acting as electronic "nerves" for detecting touch, distortion, and temperature change.

The research was supported by JSPS KAKENHI Grant Numbers 25709032, 26630180 and 25007652, and by Research grants from the Iwatani Naoji Foundation, the SCAT Foundation and The Konica Minolta Science and Technology Foundation.