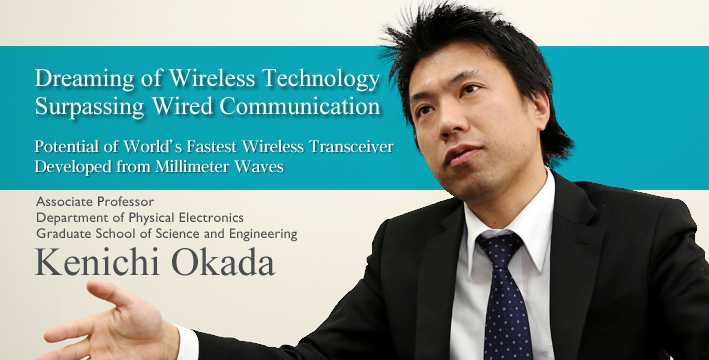 "Please put on this white coat and cap, and change your shoes, before you enter the lab."

Prompted by Associate Professor Kenichi Okada, manager of the laboratory, the interviewer slipped into a white coat. This is for preventing dirt and dust from getting into the substrates of the circuits. Beyond the glass of the lab, several students are looking into PC displays with solemn looks on their faces while operating a high-frequency measuring transceiver. Their goal is to develop the "world's fastest wireless transceiver" with their own hands.

Recent advances in wireless technologies such as mobile phones and wireless LAN for PCs are truly eye-opening. By transmitting and receiving uninterrupted radio waves faster and farther, we can send high-capacity image data and watch videos on mobile device displays. Only ten years ago, such an idea was totally beyond our imagination. 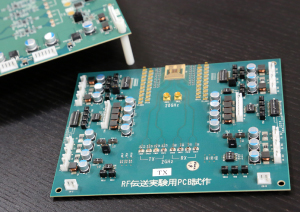 Controlling High-Frequency Noise through the Application of Existing Technologies

Millimeter waves provide a wide range of available frequencies and also have the potential to increase transmission speed radically. However, most of the millimeter-wave wireless transceivers developed in the past were based on the "heterodyne architecture" which uses a two-step process to convert the input signal frequency into a different frequency. The problem with this method is its high power consumption and its need for many components. To overcome such problems, Okada converted the signals for digital data to radio waves in one step by using direct conversion architecture which past studies have shown to be theoretically difficult. Additionally, he succeeded in reducing circuit noise drastically by using a physical phenomenon known as injection locking[1].

"We could increase communication speed unrestrictedly if it were not for noise. However, the bottleneck comes in that noise is hard to reduce. It was the injection locking phenomenon that helped break this bottleneck."

As a matter of fact, there is another important point here. Though the injection locking phenomenon itself has been known for a long time, it too has a bottleneck with regard to control that is difficult to overcome when utilizing it in integrated circuits. Okada discovered a solution to this by applying reconfigurable technology[2]. 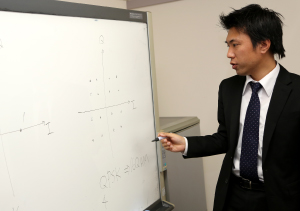 "Originally, the injection locking phenomenon utilized in integrated circuits behaves like a mischievous roughneck and it is difficult to make the circuits oscillate at the desired frequency [laughter]. But, our lab used reconfigurable technology to control the analog circuit properly through software, and to flexibly vary the center frequency and band width of the wireless transmission/reception. In this way, we reduced the noise."

Moving One Step Closer to Our Dream

In a session of the 2014 IEEE International Solid-State Circuits Conference[3] held in San Francisco on February 14, the research group of Professor Akira Matsuzawa and Okada et al. made a presentation about the development of 60GHz (60 billion Hertz) millimeter-wave wireless transceivers that can transmit 28 billion bits per second (28Gb/s)[4]. This is the first 60GHz wireless transceiver in the world compatible with a 64QAM[5] modulation scheme that can transmit 6 bits of information at one time.

Up until now, even with the fastest practical wireless LAN standard, only the 160MHz frequency band is available in the 5GHz band. In this situation, Okada et al. made a presentation that the 8.64GHz band frequency, which has a range 54 times wider than existing bands, can be utilized with millimeter-wave wireless communications using the 60GHz band mentioned above. This means that a drastic improvement in wireless communication speed is coming closer to reality. Moreover, this wireless transceiver can be implemented as a generally used CMOS[6] integrated circuit. With a compact circuit area as small as 3.9 mm2 and low power consumption, it can be mounted in mobile devices such as mobile phones. 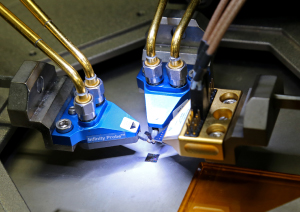 "There is still much room for miniaturization of circuits. In the future, we can realize devices the size of a finger ring. In terms of speed, we can achieve instant access beyond the concept of a download. My ultimate dream is to exceed wired communication in every respect eventually." 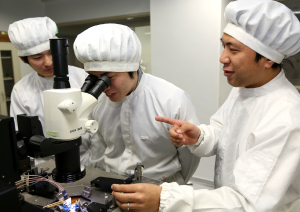 The first electronic device Okada was interested in was Hitachi's 8-bit PC, the "Basic Master Level 3." This was delivered to his home when he was ten years old. He said he was considerably intrigued as an elementary school student by the personal computer at a time when stand-alone word processors were mainstream. Then he became a junior high school student and started to assemble a radio by himself. That Okada possessed the motivation to do this at such a time is evidenced in where he is today.

"As a matter of fact, I wanted to make a cordless telephone. I tried hard to assemble it with transistors pulled out of a broken TV while referring to my junior high school textbook of technology and home economics. I was so interested in mobile phones that I used one which I "seized" from my father when none of my friends even had them. In fact, nobody ever called me, because the calling rate was too high [laughter]!"

Okada, with his numerous achievements in the world of electronic devices stemming from his boyhood curiosity, reflects that he could not have reached his current position today alone. The current millimeter-wave projects are led by the Ministry of Internal Affairs and Communications and there are many things that cannot be achieved without the cooperation of researchers in related fields and collaboration with companies. Moreover, it is extremely discouraging when an expected result cannot be achieved. Okada says that his emotional support in such difficult times comes from his research students.

"Students are motivated by concrete goals. For example, rather than saying, 'make LSI easier to use,' they are more motivated and find it more challenging to 'increase its speed tenfold.' It is really fun to do research with students like that, and I'm sure it provides motivation for both of us." 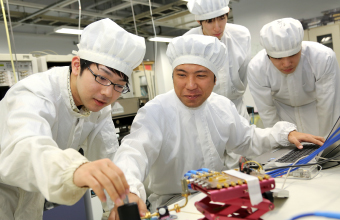 Finally, Okada heartily encourages future students based on his own experiences.

"Technology in the future can be developed in your own way if you properly learn the basics and learn from failures and small successes on the way to your goal. Tokyo Tech has a good environment and supportive colleagues to help you realize your ideas. Why not give Tokyo Tech a chance?"

Christiaan Huygens, a Dutch scientist, discovered this phenomenon in the 17th century in the synchronization phenomenon between clock pendulums. In integrated circuits with multiple oscillators, if one oscillator is disturbed by another oscillator at a different frequency, the circuit will malfunction.

This is a technology that enables the change of circuit configurations in block units without turning off the power source. This technology has the advantage that multiple wireless services can be switched according to the situation by a single set of wireless circuits.

The International Solid-State Circuits Conference (ISSCC) is an international conference for cutting-edge semiconductors hosted by the IEEE in the United States. It is the most prestigious of the semiconductor-related conferences and is also called the "Chip Olympics."

This value represents the number of billions of bits of data that can be transmitted in one second. 1Gbps is 1 billion bps (=1000Mbps).

This is a digital modulation scheme for doing conversions between digital data and radio wave/electric signals. It synthesizes two waves that are out of phase with each other by 90° and detects each wave by eight steps of amplitude and transmits six bits of information at one time. In this connection, 16QAM is the modulation scheme that can similarly transmit hexadecimal (4 bits) by detecting four steps of amplitude. 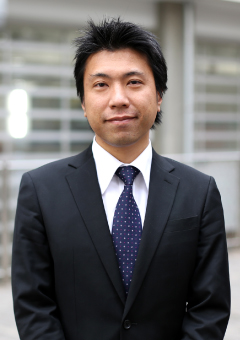