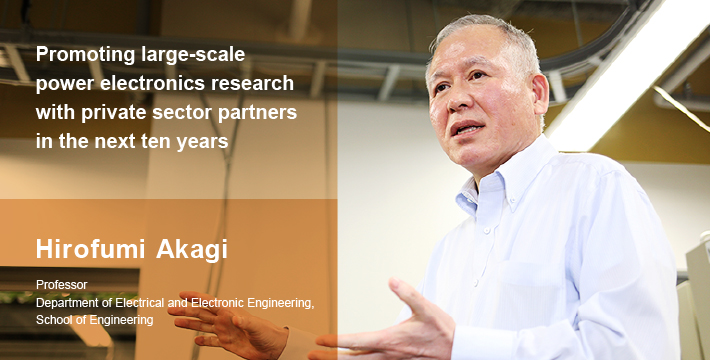 Eighty percent of electricity through power electronics by 2030

Power electronics technology is applied in a wide range of home appliances such as air conditioners, refrigerators, and washing machines, and other important indoor elements such as LED and fluorescent lighting. A prime example of this technology is the inverter1, an energy-saving system that is, among other things, used to control the rotation speed of the motor that drives the compressor in air conditioners.

"The inverter plays a key role in power conversion and control systems. It converts direct current to alternating current, often utilizing semiconductors, and is also used to regulate electric power. This applies to solar power generation too. Power electronics converts direct current from the panels to 50/60 Hz alternating current and transmits it to the electric power system," says Professor Hirofumi Akagi, a man with 43 years of power electronics research experience under his belt. 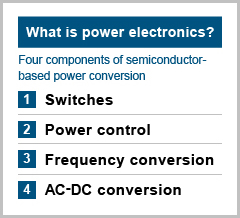 Power electronics research can be divided into two major areas: the development of high-speed low-loss power semiconductor devices capable of on/off switching to achieve efficient electric power conversion, and the application of these power semiconductors in components such as power inverter circuits, control devices, and motor drives. Akagi is working on the latter, an area directly connected to product development conducted by private sector companies.

Power electronics emerged in 1957 with the invention of silicon-controlled rectifiers (thyristors), which are semiconductor devices capable of tolerating high voltage and power. Since then, research has resulted in the development of low breakdown voltage, high-speed semiconductor devices such as MOSFETs2, IGBTs3, and newly structured high-voltage large-current semiconductor devices with reduced power loss and increased usability. Meanwhile, control technology utilizing analogue and digital signal processing has also seen remarkable development. As a result, power electronics technology has found applications in a variety of fields as a fundamental technology that supports modern-day lifestyles. It drives the development of computer power supplies, home and office appliances, industrial equipment, railways, automobiles, marine vessels, and aircraft, as well as power generation, transmission, and distribution systems.

Akagi continues, "An American academic association predicts that by 2030, 80 percent of the world's electricity will be generated or consumed through power electronics technology. This is an extremely important fundamental technology that not only helps to save and create energy, but also provides real solutions to global environmental and energy issues." 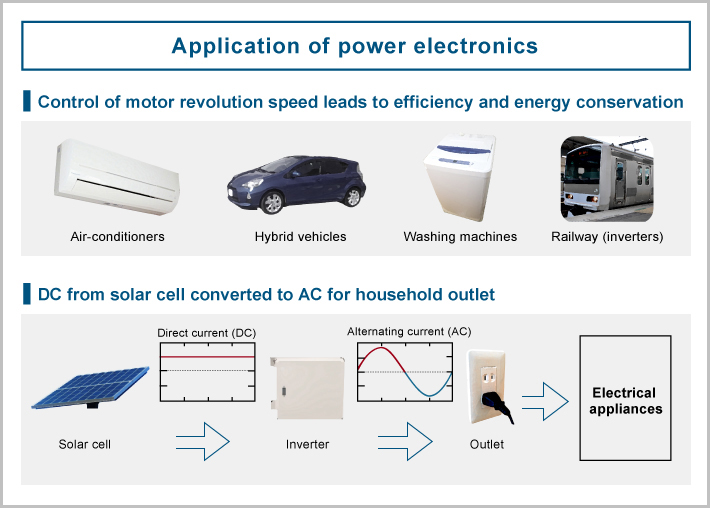 Large-scale machinery — Worth the arduous effort

Despite the broad application of power electronics technology in common appliances, Akagi is now focusing on large-scale construction machinery rather than the devices most people are familiar with.

"Inverters," Akagi says, "are already a component in hybrid vehicles, and manufacturers are now actively promoting the electric motorization of construction machinery as well. I am working with construction material suppliers on the joint development of mining, construction, and heavy industrial machinery. This is an area that I am very interested in. Hybrid vehicles require 50 kW inverters. Super-large dump trucks employed in mining require 1,000 kW inverters. These are equivalent to those mounted on shinkansen coaches." 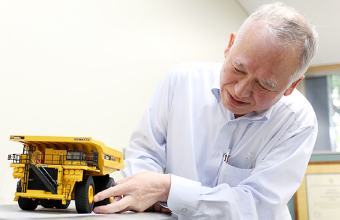 Super-large dump trucks have tires that measure about four meters in diameter. Mounting 1,000 kW inverters would increase efficiency by one percent and reduce electricity use by about 10 kW. The increase in efficiency would also make it easier to cool power electronics devices, make devices more compact, and reduce the cost of inverter production. "This is, however, easier said than done," Akagi comments.

"The stability and efficiency of high-voltage high-current power converters may deteriorate with large loads," he continues. "Finding a way to improve efficiency is a very interesting challenge for me."

It may be due to this dogma that when Akagi decides to embark on research partnerships with companies, he selects a research topic which requires five to ten years of work. Companies often look one or two years down the road, but very rarely envision the next ten years. The reason for this is the tremendous cost of research. Few companies want to solely take on this burden. Universities, on the other hand, can continue research on the same topic as long as they have funding. In such cases, the cost for companies drops to about one tenth. This is what has continuously allowed Akagi to conduct joint research with private sector partners.

A paper plane and rubber band

"I first learned about power electronics in college, but my interest in engineering really started in my childhood," Akagi reflects on his past. He was born and raised in Okayama city, where his father was working for the Japanese National Railways. Living near the station, he saw the steam engine locomotives hauling passengers and freight every day. On a family trip, a glimpse of the newest limited express at Kyoto station, the Kodama 151 series, is still a very clear memory.

Akagi smiles as he talks about making rubber-band-powered planes in elementary school. "I bent thin bamboo strips in warm water to make a frame, and pasted paper on the wings, tail assembly, and tail fin. I sprayed it with water and let it sit overnight so that the paper would tighten and strengthen the frame. When I flew it, it swooped up, then dived down suddenly, and crashed. I adjusted it here and there, trying again and again until it finally flew level and long. This was my start in manufacturing."

Becoming more and more enthralled by manufacturing, Akagi entered the Department of Electrical Engineering at Nagoya Institute of Technology. He was interested in electric power and energy, including electric motors and generators, control theory, and electric power system engineering. Still, his main interest was in power conversion circuits and systems. It was here that he first encountered the field of power electronics technology and the use of silicon semiconductors to control electric power. He was amazed by the fundamental technology used to control torque on the direct-current (DC) motors that drove the 1.5 kV DC electric railcars. In his fourth year, in April 1973, he joined a research group focusing on power electronics technology. This was the beginning of his adventure into research which would become his lifework.

The p-q theory: A conundrum solved through reverse thinking 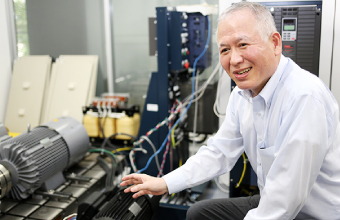 Akagi explains, "The definition and physical meaning was consistent with speculation, which prompted experts to accept it as valid. Currently, this theory of instantaneous active and reactive power in three-phase circuits is called the p-q theory."

As soon as he established the p-q theory, he applied it to a three-phase power conversion system and experimentally verified operating characteristics that had until then been impossible to obtain through the application of the conventional reactive power theory. His research paper was published in the July 1984 issue of the IEEE4 Transactions on Industry Applications, the world's most authoritative journal in the field of power electronics, and he gained the admiration of power electronics researchers and engineers worldwide. The total number of citations from the conference paper presented in 1983 and the Transactions paper published in 1984 reached 4,000, a number that continues to increase over 30 years after the two papers were first presented and published.

Power electronics technology in the world's most advanced rail nation 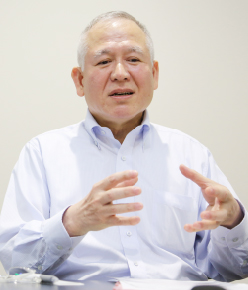 After leaving Nagaoka University of Technology in 1991, Akagi returned to his hometown as professor at Okayama University and spent nine years researching power electronics before joining Tokyo Tech, where he had taken his master's and doctoral degrees. He took over the laboratory where he had carried out research as a graduate student. Looking back, Akagi says that he felt a deep sense of responsibility and mission, as he does today.

"The research environment at Tokyo Tech is excellent. Our power electronics lab is directly related to manufacturing and provides students a wide range of opportunities to experience modeling, analysis, simulation, experimental device design and production, data measurement, and characteristics evaluation, which cover the requirements of engineering research and are useful for research and development at both companies and universities after graduation. Tokyo Tech is also proud that its education and research paradigm focuses not only on the experimental aspect, but also on the theoretical one. Tokyo Tech's strength lies in providing a research environment that combines know-how, technology, and advanced equipment. I hope more students are able to take full advantage of these benefits. The Institute has excellent students from overseas who promote interactions beyond the boundaries of culture. Some have acquired doctoral degrees and passed the most advanced Japanese language proficiency tests. As a result, they have been hired by Japanese companies and bear core responsibilities in the research and development of power electronics."

Japan leads the world in power electronics technology, the driving force of which has been the nation's advanced railway system, a source of childhood fascination for the professor. This attraction appears undiminished. With his eyes on the future, Akagi feels that Japanese and international researchers alike have a continuing responsibility to work toward realizing more effective use of electricity.

Institute of Electrical and Electronic Engineers, an international organization in the field of electric and electronic engineering with its headquarters in New Jersey. IEEE has 420,000 members, making it one of the largest technical professional organizations in the world. 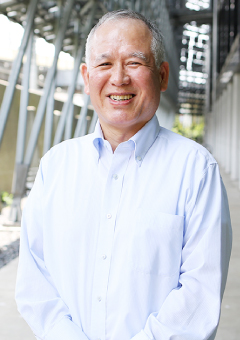