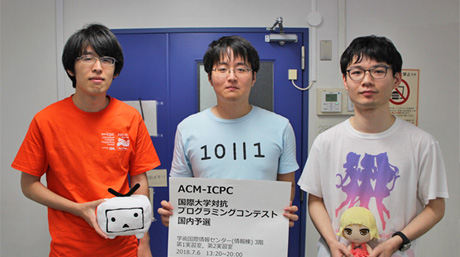 The Japan qualifications for the 2018 Association for Computing Machinery (ACM) International Collegiate Programming Contest (ICPC) were held on July 6, and three Tokyo Tech teams booked their place in the Asian regional competition in December.
A total of 411 teams from 87 universities, junior colleges, and technical high schools around the country tested their skills during the 3-hour qualification round. Of the 39 top teams that received special awards from the ICPC Board, five were from Tokyo Tech.
However, in accordance with ICPC rules, only three teams from each institution can advance to the regional competition in Yokohama. Team narianZ, Team, new_moon_with_face, and Team 60odnight will attempt to tweak their performance further in hopes of progressing to the world finals, which Tokyo Tech reached last year.
This year, in addition to Yokohama, Singapore, Taipei, Nakhon Pathom, Hanoi, Jakarta, Seoul, and Yangon will also host regional competitions.