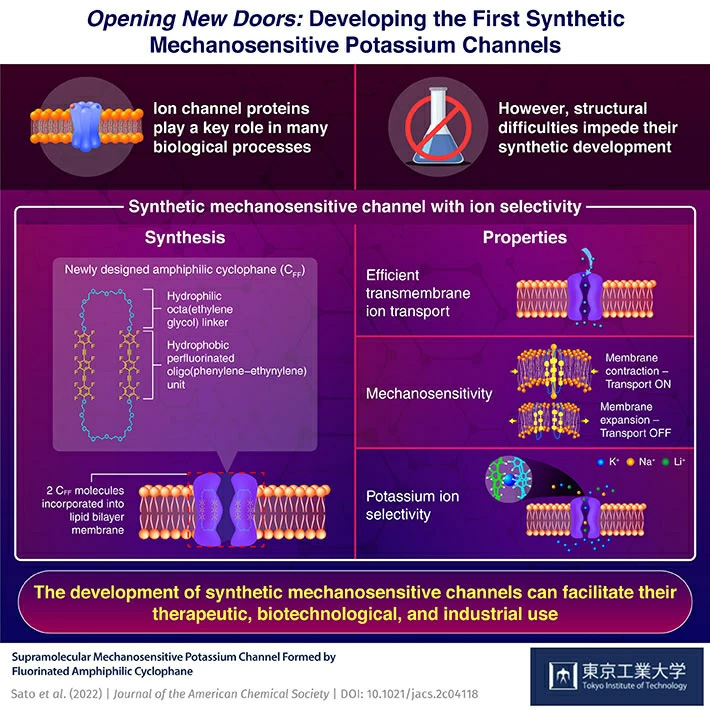 Nature inspires mankind in a myriad of ways. Take, for instance, "stimuli-responsive" ion transport channel proteins. These proteins are found embedded in cell membranes and respond to a variety of external stimuli, including light, pH, and mechanical force. Given their crucial role in several biological processes, researchers have attempted to synthesize the artificial versions of these channel proteins for use in therapeutic and industrial settings. However, success in synthesizing them has been elusive. The complex structural requirements for stimuli responsiveness and specific ion transport properties have been identified as the major impediment in their synthesis.

Overcoming these difficulties, researchers from Tokyo Institute of Technology (Tokyo Tech), led by Assistant Professor Kohei Sato and Full Professor Kazushi Kinbara, have recently developed the first synthetic mechanosensitive (responsive to mechanical force) channel with potassium ion selectivity. Their findings are published in the Journal of the American Chemical Society

. Talking about the study, Assist. Prof. Sato and Prof. Kinbara, affiliated with the School of Life Science and Technology at Tokyo Institute of Technology (Tokyo Tech), say, "With our experience in designing multiblock amphiphiles which self-assemble to form supramolecular ion channels, we hypothesized that linear amphiphiles were not suitable for transporting specific ions; hence, we attempted structural modifications to incorporate both stimuli responsiveness and ion selectivity."

Microscopy revealed that both the perfluorinated cyclophane, named CFF, and the partially fluorinated cyclophane, named CFH, could get incorporated in the lipid bilayer membrane, while the nonfluorinated cyclophane could not. The researchers then analyzed the ion transport property, stimuli responsiveness, and potassium ion selectivity of CFF and CFH using conductance measurements, fluorescence assays, and computational studies. They identified that both CFF and CFH self-assembled in the bilayer membrane to form supramolecular ion channels. Moreover, the flow of current across the membrane confirmed the transmembrane ion transport property of both CFF and CFH, more efficient and pronounced in CFF.

Changes in the current flow on applying membrane tension further confirmed the stimuli responsiveness of the channels formed by CFF and CFH. The ion transport property of CFF was affected significantly, while it did not change much for CFH. Assist. Prof. Sato, Prof. Kinbara, and their team attribute these variations to the differential interaction of the aromatic units of CFH and CFF within the membrane.

Lastly, fluorescence assay revealed highest permeability of CFF for potassium ions compared to other alkali metal cations. The team found that the higher affinity of potassium ions for the fluorine atoms in the core of the structure was responsible for this phenomenon.

Commenting on these findings, Assist. Prof. Sato and Prof. Kinbara say, "The fact that a supramolecular ion channel formed by CFF possesses such stimuli responsiveness and potassium ion selectivity is not only intriguing, but also strikingly similar to the mechanosensitive channels found in mammalian neurons."

With this demonstration, possibilities such as the development of therapies for ion-channel related diseases, manipulation of important biological processes, and development of industrial material purification technologies are already in sight!