Scientists at Tokyo Institute of Technology (Tokyo Tech) and University of Tokyo, Japan, have, for the first time, synthesized a novel artificial transmembrane ion channel—modelled on a naturally found transmembrane channel involved in neuron signaling—that responds to both chemical and electrical stimuli. Given its overall properties, this artificial channel opens doors to novel fundamental research into cellular transport and signaling, new possibilities in drug development, and the potential for new types of biosensors. 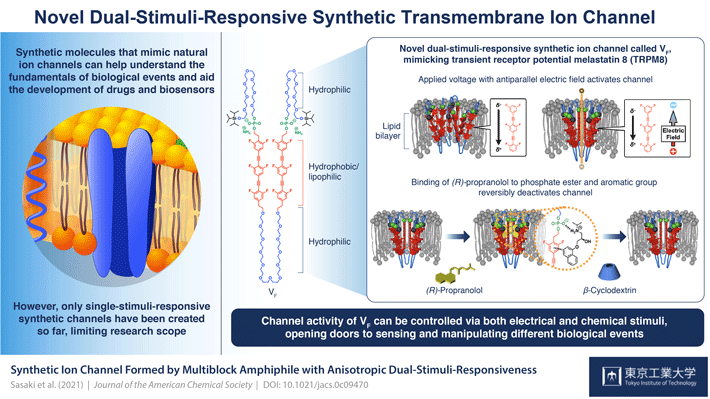 A key thread that holds together the delicate balance of a complex biological system is the transmembrane ion channel. These are supramolecular, or multi-molecule, ion and molecule exchange routes embedded within cell membranes to ensure essential chemical transport to and from the cell and facilitate cell signaling.

In recent years, synthetic biomolecules that mimic the structures and functions of natural ion channels have garnered much interest among molecular biology researchers as models for studying the fundamentals of these channels and perhaps, even creating drug alternatives or developing advanced biosensors.

However, although several good synthetic ion channels have been developed, most of them are activated via only a single stimulus and none are what scientists call "anisotropic dual-stimuli-responsive", or ones that can be activated and controlled by two specific kinds of stimuli dependent on the biased orientation of the structure within the membrane. This has limited research scope in the field.

Now, finally, a group of scientists from Tokyo Tech and the University of Tokyo, Japan, have successfully synthesized a biomolecule that resembles a natural anisotropic dual-stimuli-responsive channel: transient receptor potential melastatin 8 (TRPM8), which underlies signal transmissions in neurons. Their channel is called VF and their breakthrough is published in Journal of the American Chemical Society.

VF is a multiblock amphiphilic (it has both water loving (hydrophilic) and fat loving (lipophilic) properties) molecule that can assemble to form supramolecular channels. Each unit in a block comprises an organic lipophilic/hydrophobic moiety with six fluoride atoms that position it within the lipid bilayer of the cell membrane and lend it an electrical polarity; a phosphate ester group which ensures that the structure is biased in its orientation (with the phosphate side towards the extracellular space); and flexible ethylene glycol hydrophilic chains between hydrophobic units and on the ends that contribute to the stimuli-responsiveness.

The scientists' studies of this structure showed that by manipulating the polarities and amplitudes of applied voltages, the channel could be activated. Prof. Kazushi Kinbara, lead scientist in the team, explains: "Without the application of a voltage, the hydrophobic units of VF repel each other so that they would be spatially separated from each other and would not form clear and functional transmembrane ion channels. When a voltage with the electric field vector antiparallel to the electrical polarity of the VF is applied, a displacement of electron distribution within VF occurs, weakening the repulsion between hydrophobic units and enhancing their face-to-face stacking. This causes conformational changes throughout the molecule which leads to the formation of supramolecular channels that can efficiently transport ions across the membrane."

The scientists found that the second stimulus had to do with the binding of ligand (R)-propranolol at the connection between the phosphate esters and the hydrophobic units. As Prof. Kinbara explains, "(R)-propranolol is an antiarrhythmic agent known to block voltage-gated sodium channels. Moreover, our previous studies indicated that it interacts with phosphate ester groups and aromatic units to localize inside the channel pore and block ion transport. That is why we chose it for our study." Their nuclear magnetic resonance spectroscopy revealed its binding at the phosphate sites, and that it completely inhibits the current flow and thus the ion channel activity of VF. Its removal via the addition of β-cyclodextrin reactivates the channel. "Reversible ligand binding such as this is key to maintaining homeostasis within the body via the regulation of transmembrane ion channels. The highly regulated orientation of VF allowed for this anisotropic response to this ligand molecule," Prof. Kinbara says. "With our success in this study, there is now great potential for sensing and manipulating various biologically important events."

Indeed, with the synthesis of VF, suited to the variable cellular environments ubiquitous in biological systems, perhaps, new possibilities for research emerge in the field of molecular biology.