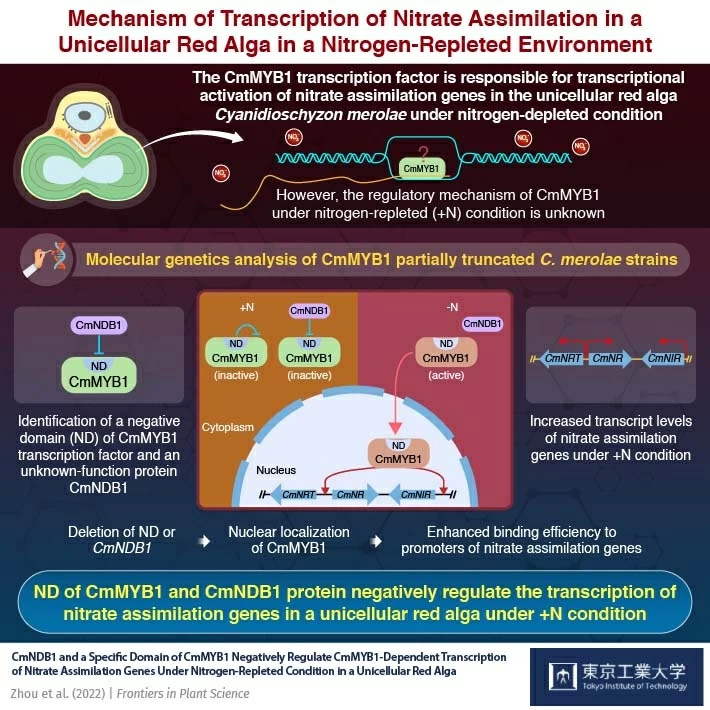 The same holds true for Cyanidioschyzon merolae, a unicellular red alga, which serves as an excellent model of photosynthetic higher organisms to study transcription. While it is known that the TF called ‘CmMYB1’ is responsible for transcribing nitrate assimilation genes in nitrogen-depleted condition, the mechanism for this under nitrogen-repleted (+N) condition is not clear.

To address this conundrum, in a study published in Frontiers in Plant Science

, a team of researchers from Tokyo Institute of Technology (Tokyo Tech) and other institutes explored the molecular mechanisms controlling the regulation of CmMYB1 in C. merolae under +N condition. "Based on our previous studies, we were already aware that the activity of CmMYB1 is associated with a regulatory region of itself and/or CmMYB1-binding protein(s), and thus attempted to identify it," explains Professor Sousuke Imamura, the lead researcher of the study.

To do this, they first generated C. merolae strains with CmMYB1 knocked out and transformed them with plasmids containing different truncated sequences of CmMYB1. Subsequently, they identified a sequence of CmMYB1 between positions 311–380 as the key region responsible for downregulating nitrate assimilating genes under +N condition, inhibiting transcription as a result. Further analyses based on quantitative polymerase chain reactions indicated increased transcript levels of these genes in the strain lacking the key region of CmMYB1 under +N condition. They labelled this new sequence as the ‘negative domain’ (ND) of CmMYB1.

As the role of ND became clearer, the team decided to identify proteins involved in its regulation. To do so, they constructed an ND overexpressing strain, and performed immunoprecipitation and mass spectrometry analyses to obtain a list of potential ND binding proteins in collaboration with investigators from Tohoku University. Finally, through a yeast two-hybrid analysis, they identified a new protein with an unknown function, named ‘CmNDB1,’ which interacts with ND of CmMYB1.

Through several analyses using a CmNDB1 knockout strain, they discovered that CmNDB1 deletion resulted in nuclear localization of CmMYB1 and reduced promoter binding capacity of CmMYB1 under +N condition. Moreover, they discovered that CmNDB1 deletion increases the transcription of nitrate assimilation genes under +N condition.

To sum up, both ND and CmNDB1 negatively control CmMYB1's activity under +N condition, facilitate its localization in the cytoplasm, and repress its binding to promoter regions of nitrate assimilating genes to downregulate their transcription. Discussing the implications of these findings, Professor Imamura says, "Ours is the first study to reveal the mechanisms behind the regulation of transcription of nitrate assimilation genes under +N condition. These innovative results can significantly help in the advancement of research in this field."

Identification of the critical ND region of CmMYB1 and the CmNDB1 protein were key milestones that helped to understand the regulation of nitrate assimilation in C. merolae. Further studies, like investigation of the post-translational modifications of CmMYB1 and/or CmNDB1 are required to better understand the regulation of nitrate assimilation not only in this red alga but also in other photosynthetic organisms.

Through the wealth of information this study provides, researchers will definitely gain an improved understanding into important molecular functions and mechanisms in plants.