Algal residue - an alternative carbon resource for pharmaceuticals and polyesters

Researchers at Tokyo Tech found that algal residue, the leftover material after extracting oil from algae for biofuel, can be used to produce key industrial chemicals.

Microalgae have received much attention in biomass production due to many strains having a high biomass productivity per unit time and per unit area. Algae produce high levels of oil as well as carbohydrates, occurring mainly in the form of starch. They can survive in unfavorable, nutrient deficient conditions, and can be propagated industrially without using farmland. Oil derived from algae has recently been adopted for use in jet fuels and biodiesel. Previously overlooked, however, was the starch remaining in algal cells after oil extraction. Sho Yamaguchi, Sousuke Imamura, who teaches Human Centered Science and Biomedical Engineering, and colleagues found that this starch can be converted into alkyl lactate and alkyl levulinate, important chemicals in the production of pharmaceuticals, additives, and polyesters.

Two molecules of lactic acid can be dehydrated to lactone lactide and subsequently polymerized to either atactic or syndiotactic polylactide, which are biodegradable polyesters. Levulinic acid, on the other hand, is used as a precursor for pharmaceuticals and additives like plasticizers, as well as a starting material for a wide number of compounds. The researchers found that using homogeneous Sn(OTf)2 led to an increase in the yield of alkyl levulinate, while using SnBr4 allowed for the selective production of alkyl lactate. Their results show that algae can be utilized not only as a biofuel source, but also as a carbon resource for chemicals that are applied in a wide range of industries. This could lead to algae biomass becoming a new alternative carbon resource to fossil fuels.

Yamaguchi and colleagues examined various homogeneous catalysts to optimize the selective production of methyl levulinate and methyl lactate. They state, however, that further development of heterogeneous catalysts is needed before the process can be put to practical use. Additionally, they recognize the importance in understanding the underlying mechanisms of starch production in algae, as doing so could lead to further advances in algal biomass production. 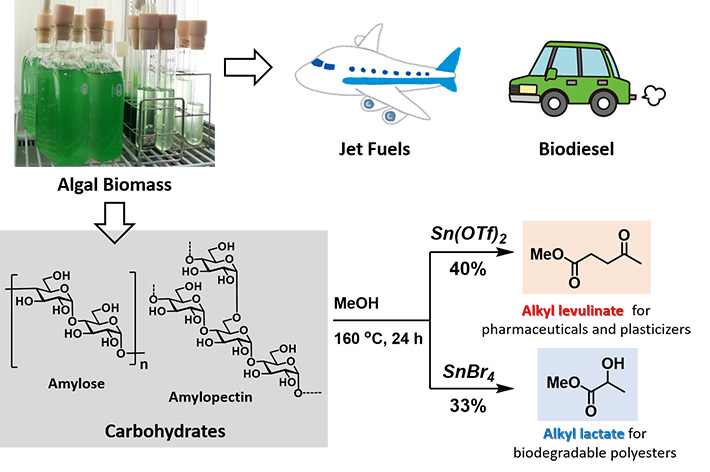