Team Leopard, led by 2nd-year Systems and Control Engineering student and Society for the Study of Robotics member Yuta Fujiyama, has scored a double victory at RoboCup 2021 WORLDWIDE, a global autonomous robot contest held online from June 22 to 28. Team Leopard, representing Japan and consisting of Fujiyama and two high school students, won the RoboCupJunior League Open category and Super Team category, the latter of which involved partner teams working together. 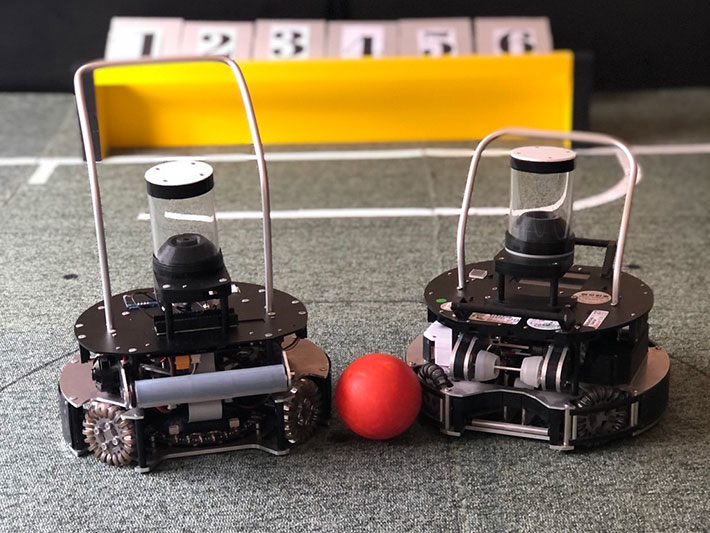 RoboCup is a global robotics contest that aims to promote research in artificial intelligence and robotics. Its organizers have the ambition to create a team of autonomous robot players that can defeat the human World Cup soccer champions by the year 2050. The key in the competition is to create robots which are fully autonomous.

RoboCup began in 1992, and the first global competition was held in Japan in 1997. RoboCupSoccer eventually spawned new categories such as RobotCupRescue, which focuses on search and rescue scenarios and applications, and RobotCup@Home, which aims to develop service and assistive robot technology with high relevance for future personal domestic applications.

The RoboCupJunior League is for 14 to 19-year-olds who compete in four different categories.

In the RoboCupJunior Soccer Open category, teams representing 13 countries and regions gathered to show off their technical skills in robot soccer. Traditionally, each team creates two soccer robots who then face off in a 2-on-2 soccer match to compete for points. However, the 2021 tournament was held online for the first time ever, and therefore no matches could be held. To make up for this, each team was evaluated based on three factors — a robot video, a team description paper, and the technical challenge. The winner was the team with the highest total score.

The aim of the robot video is to share new technologies in areas such as design and programming developed by each team each year, and to deepen knowledge regarding robotics across the broader community.

Each three-minute video introduces the team, and summarizes the reasoning behind their decisions in design, component selection, and programming during the robot manufacturing process. Many videos also share details of experiments conducted during robot development and related data.

The team description paper is a brief research paper that can be used to explain in more detail aspects that are not included in the video. This can include more information about the team's background, new technologies introduced in hardware and software, strategies, future prospects, and the like.

The 2021 Technical Challenge consisted of solving tasks imposed on the soccer robot within a 24-hour period and submitting a video of the robot completing the tasks. Team Leopard's robot had features not found on other teams’ robots. These included a mechanism that can kick the ball in any direction and motion sensors that measure the movement of the robot in the same way as a computer mouse. There were moments when they struggled, but Team Leopard score a sensational 50/50 in the Technical Challenge. 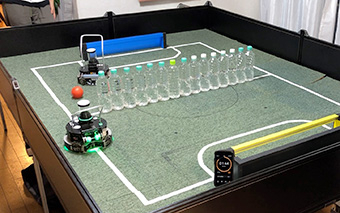 Perfect score of 50/50 in Technical Challenge

Team Leopard won the overall contest with a near-perfect score of 99.06. 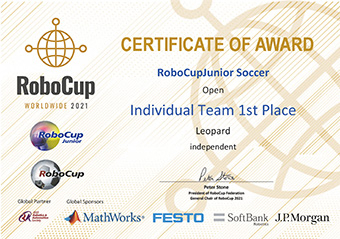 At the workshop that followed the competition, Team Leopard gave a presentation and answered questions about their robots and the technology they developed during the competition. 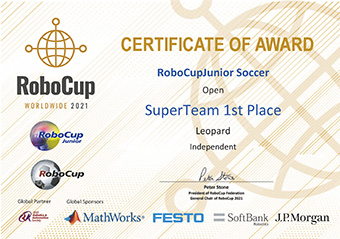 I have been participating in RoboCup since I was 10 years old, and this year was the last time I could join due to age restrictions. I had been aiming to win the world championship for the past decade, and I am delighted to achieve this goal. When developing these robots for the championships, I was able to make use of my experiences at the Society for the Study of Robotics, as well as the mathematics and mechanics knowledge I have gained at the Department of Systems and Control Engineering.

This victory is the result of our team efforts, but also the many people who supported us along the way. In the future, I would like to utilize the technology we developed for this contest in future projects at the Society for the Study of Robotics. 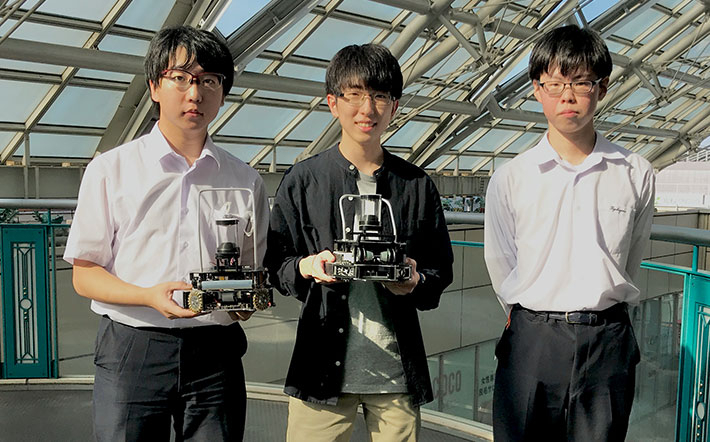 Society for the Study of Robotics

Tokyo Tech's Society for the Study of Robotics is an official student club that focuses on the research and development of robotics, including mechanical, electrical, and programming technology. The club currently has approximately 200 student members from Tokyo Tech. In addition to machine tools such as a miller, lathe, and drill press, the club's facilities also support the development of electrical circuits and software for oscilloscopes, computers, and other devices. While many focus on robot creation, club members are free to create whatever they want. Even students without prior knowledge can learn design-related mathematical aspects and circuit-related practical methods from scratch.

Society for the Study of Robotics