Assoc. Prof. Takayuki Ishizaki receives the Young Scientists’ Award of the Commendation for Science and Technology by MEXT

Assoc. Prof. Takayuki Ishizaki of the Department of Systems Control and Engineering, School of Engineering has received the Young Scientists’Award of the Commendation for Science and Technology by MEXT for his work on Optimal Distributed Cooperative Control Theory for Systems of Systems. 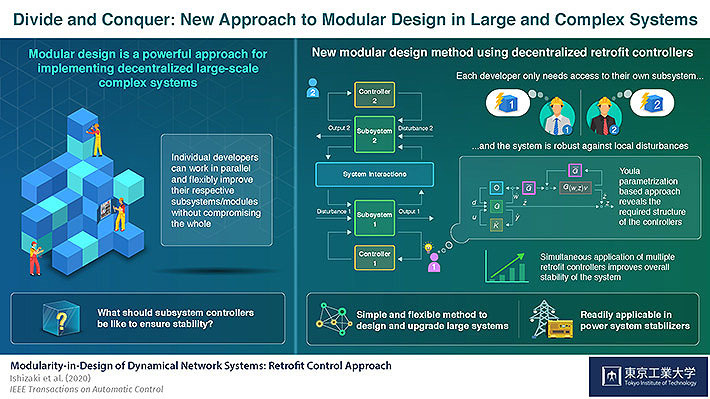 A theoretical framework for the optimal distributed control of large-scale, complex systems of systems such as power systems.

Modular design has many achievements in software engineering, but in control engineering, it is not easy to design and develop control algorithms by dividing them into modules. The reason for this is that control engineering is mainly concerned with dynamic systems whose physical laws are described by differential equations related to time. In general, the behavior of a dynamic system is influenced not only by the present but also by the past control behavior, so even if a control algorithm is designed that works well for each module (subsystem), the whole system can easily become unstable if the dynamic interferences among them are not properly considered. This is the reason why I have developed a modular design method for decentralized control.

My retrofit control theory enables multiple entities to incorporate and update optimal control algorithms in an autonomous and decentralized manner without fear of such instability. At the same time, we have succeeded in mathematically characterizing the control principles that are essential for maintaining the stability of the entire system.

The results of this research were obtained with the cooperation of our supervisors, as well as the students and collaborators who worked with us. We would like to take this opportunity to express our sincere gratitude.