For some materials, light can induce a change in state through a process known as photo-induced phase transition. This phenomenon has attracted global attention as a pathway to replacing current electronic devices with ultrafast, low-energy, optical devices.


A domino effect of change with one photon 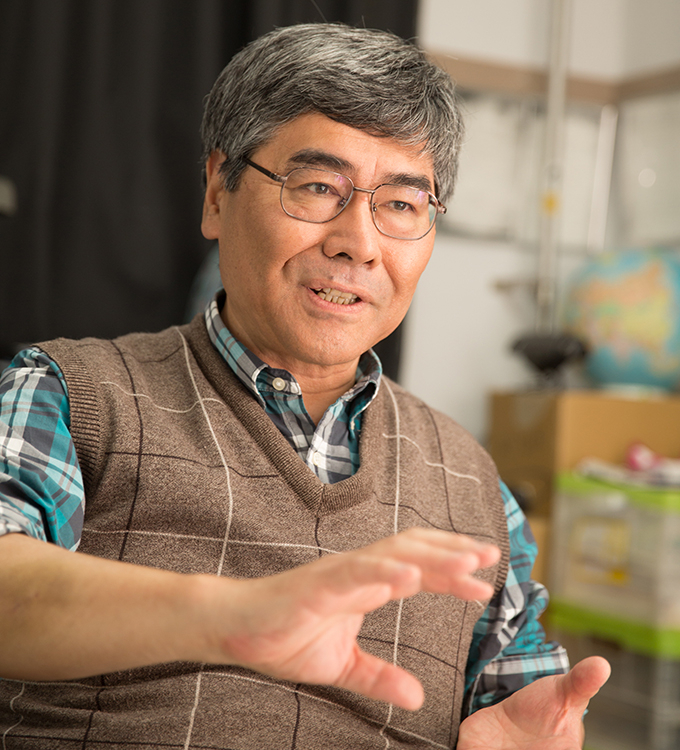 Water can become ice (a solid) or steam (a gas), depending on changes in temperature and pressure. While maintaining the same composition, it can change into different phases — solid, liquid, or gas in a process called phase transition. Interactions between the atoms and molecules of a material, or sometimes even the structure of the molecules of that material, change with external conditions such as temperature, electric field, and magnetic field. This can cause drastic and varied alterations in a substance's characteristics (magnetism, dielectricity, conductivity, thermal properties, etc.).
"Photo-induced phase transition" refers to a change in state of a material through simple exposure to light. If we could create ultrafast, low-energy systems that harness weak light to instantaneously switch insulators into metal or electrically neutral organic substances into ferroelectric1 substances, it would be a realization of never-before-seen photoelectric devices2. Research on such systems is being conducted around the world, and Shinya Koshihara was the first to demonstrate an ultrafast, highly efficient photo-induced phase transition in an organic material. He is also the discoverer of many other substances which exhibit this phenomenon.
"Current electronic devices (mainly memory devices) are driven by phase transitions generated by electric and magnetic fields. About 30 years ago, I had an interesting conversation over dinner with the supervisors and researchers in my lab, where we discussed how it would be great if phase transitions, typically controlled by temperature and electric and magnetic fields, could also be controlled by light. This was the beginning of my current research," says Koshihara.
The ability to induce changes in materials through exposure to light has been known for some time. In fact, photoreaction-driven devices are already in practical use. However, while previous studies showed the change of one molecule with one photon, in a photo-induced phase transition, after one photon changes one electron, a successive change in surrounding electrons continues in a domino effect. This can significantly alter the structure and characteristics of the substance and cause a phase transition. Koshihara calls this phenomenon the photo-domino effect.
"Electronic devices require a tremendous amount of electricity to process and convert information. Heat loss is also large, which raises the issue of whether such devices are sustainable, considering their impact on global warming. Using photo-induced phase transition in memory devices would accelerate the speed at which information is converted by more than 1,000 times, while also significantly saving energy. This is the reason photo-induced phase transition has attracted global attention, even with its wide range of problems, such as material instability," explains Koshihara.