Radical reactivity of aromatic molecules 9-phosphaanthracenes is difficult to analyze using conventional techniques due to their short lifetimes. To overcome this analytical hurdle, a team of scientists from the Tokyo Institute of Technology (Tokyo Tech) led by Dr. Shigekazu Ito resorted to muon spin resonance/rotation spectroscopy and density field theory calculations to explore the molecular motion of 10-mesityl-1,8-bis(trifluoromethyl)-9-phosphaanthracene. This insight can help scientists manipulate their chemical properties as per the application requirements. 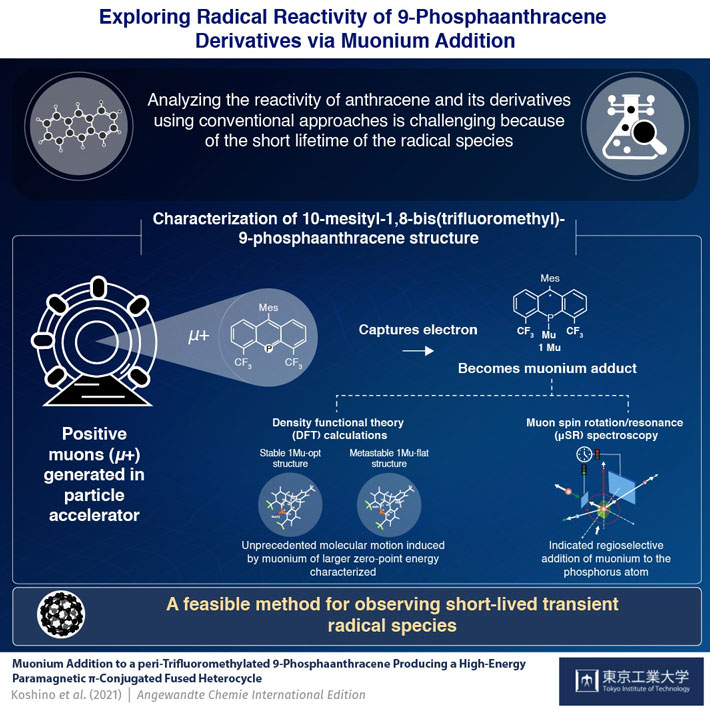 Anthracene is a solid organic compound derived from coal-tar distillation. Apart from its use as a red dye, it has also been used in the field of nanographene material design, as it exhibits excellent electronic and light-emitting properties. One of its derivatives called 9-phosphaanthracene has been widely studied for decades due to its radical reactivity. This activity grants 9-phosphaanthracenes attractive chemical properties such as eco-friendly redox activity, bioactivity, and combustibility.

For a very long time substituted 9-phosphaanthracenes synthesized were very chemically unstable until very recently when air tolerant 10-mesityl-1,8-bis(trifluoromethyl)-9-phosphaanthracene was prepared. The new stable compound showed excellent radical reactivity and has been since used to understand photoemission and crystalline properties of materials.

However, not much is known about the nature of radical reactions taking place in this new and promising substituted 9-phosphaanthracene. The short lifetime of the transient radical species and unanalyzable side reaction make it very difficult for conventional spectroscopic and physicochemical techniques to analyze its structure.

In a recent study published in Angewandte Chemie International Edition, a team of researchers from the Tokyo Institute of Technology led by Associate Professor Dr. Shigekazu Ito came up with a solution to overcome this issue. They employed muon spin rotation/resonance (μSR) and density field theory (DFT) simulations to understand the skeletal structure of 10-mesityl-1,8-bis(trifluoromethyl)-9-phosphaanthracene. As Dr. Ito explains, "Muon spin resonance/rotation spectroscopy is a highly sensitive and powerful tool when it comes to analyzing organic molecular systems with short lifetimes. Combined with the power of computational modeling, this technology allows us to look at things that were previously hard to observe."

In the spectroscopic experiments, the organic substance, which is an insulator by nature, was allowed to interact with positive muons (μ+) generated from a high-energy beam proton accelerator. On hitting the 9-phosphaanthracene, the muons absorbed electrons from the sample to form muonium (μ+e–), which is an isotope of Hydrogen. The addition of the hydrogen surrogate caused the molecules to be weakly attracted to the magnetic field required for μSR. The measurements indicated the muonium addition at the phosphorous atom in the structure in a regioselective (which means preference of one reaction site over another) way.

The team also ran DFT simulations that suggested the presence of two different structures of the same molecule. Only one was of them was predicted to be stable. These calculations also brought to light some unprecedented molecular motions induced by the isotope effect within the conjugated system— molecules with electrons that can move freely within the structure.

The method adopted in this study could prove useful for scientists investigating other complex organic skeletal structures. "Our study has successfully revealed the molecular dynamics and structure of 10-mesityl-1,8-bis(trifluoromethyl)-9-phosphaanthracene. This information is very vital when it comes to carrying out further reactions and fine-tuning its chemical properties for various applications," concludes Dr. Ito.

This could be a small step towards designing versatile conjugated organic molecules!