Silver Linings: Adding Silver to the Nanoclusters Can Do Wonders for their Luminescence

Scientists at Tokyo Institute of Technology have discovered that a silver-doped platinum thiolate nanometal complex shows 18-fold greater photoluminescence than the original platinum complex. In their recent paper, they provide insights into the causes of this, crowning a new approach to creating efficient non-toxic and biocompatible compounds for bioimaging. 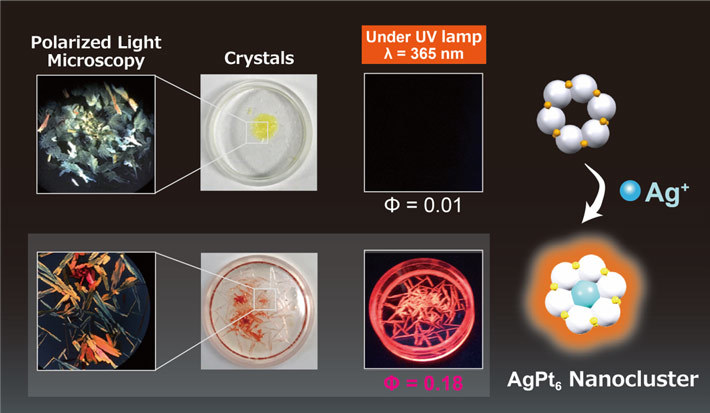 Figure 1. Photoluminescence of the silver doped platinum thiolate complex versus that without sivler doping.

Most of us have encountered luminescence in one form or another, be it fireflies in the night or planktons in the ocean, or even a glow stick at the fair. While a wonderful phenomenon in itself, luminescence has a greater appeal to scientists for more specific reasons, such as its ability to make light-sensitive biological samples glow in the dark under the microscope.

Recently, metal nanoclusters—very small particles in the size range of a few nanometers—have garnered a fair bit of attention from biochemists as promising photoluminescent materials for bioimaging, given their convenient size for permeability into various organs, their non-toxicity, and their biocompatibility, in contrast with existing organic dyes or semiconductor nanoparticles. There is, however, a fundamental issue preventing their widespread use: the photoluminescence is extremely low and short-lived.

A team of scientists from Tokyo Institute of Technology (Tokyo Tech), Japan, think that this could be because the mechanisms underlying the photoluminescent behavior of these particles is still poorly understood. In their latest paper published in Angewandte Chemie

Their x-ray crystallographic observation of the structure showed that the silver ion is at the center of a tiara-shaped platinum complex ring. Further observation revealed that the photoluminescence under UV irradiation is high when this structure is in its crystal form (Figure 1) or when its solution in an organic solvent is ultra-cooled to 77 K or –196.15 °C. Prof. Imaoka lays down the questions these observations raised: "One reason for these photoluminescence increases is that the thermal movement of the components of the ring portion is suppressed under these conditions. But what role does the structure play and do frontier molecular orbitals have anything to do with this increase?"

To find out, the team conducted density functional theory calculations. These calculations gave them an idea of the structures of the complex based on the energy states and geometry of molecular orbitals—the range of electron movement within the structure. They found that when energized, such as with UV irradiation, the structure is kept stable by the silver ion, leading to good photoluminescence; this is unlike the ring structure alone which becomes highly distorted upon excitation (Figure 2). "This could be because the size of the silver ion and the cavity of the platinum thiolate ring are a good match and the orbitals are in good alignment," Prof. Imaoka explains. "Any distortion would cause an energetically unfavorable repulsion. The silver ion acts as a template to maintain the highly ordered structure of the tiara-like complex, thereby enormously enhancing its phosphorescence."

Figure 2. Molecular orbital diagram showing the geometries of the electrons and ions of the doped and undoped structures in their ground and energized states.

Theoretical calculations demonstrated how the silver ion fit well into the hole in the platinum thiolate ring, significantly stabilizing the structure in the energized state. When the silver ion is not present in the ring, the structure distorts considerably upon energization.

These findings corroborate with those of another study on a rod-shaped silver ion doped gold complex. "If there is a discernible correlation between this study and previous such studies, then the silver ion's ability to stabilize the lower energy unoccupied molecular orbitals in these structures could be the new key to designing photoluminescent metal nanoclusters. The details of frontier molecular orbitals that are unique to each cluster could be useful in predicting ideal structures of metallic clusters, and perhaps, shining a light on the path to developing novel and efficient ones in the future," Prof. Imaoka comments, excited about his work.

After all, who wouldn't be if one atom is all it takes to make a difference?