A Research group led by Tokyo Tech reports a way of constructing DNA-based microcapsules that hold great promise for the development of new functional materials and devices (Figure 1). They showed that tiny pores on the surface of these capsules can act as ion channels. Their study will accelerate advances in artificial cell engineering and molecular robotics, as well as nanotechnology itself. 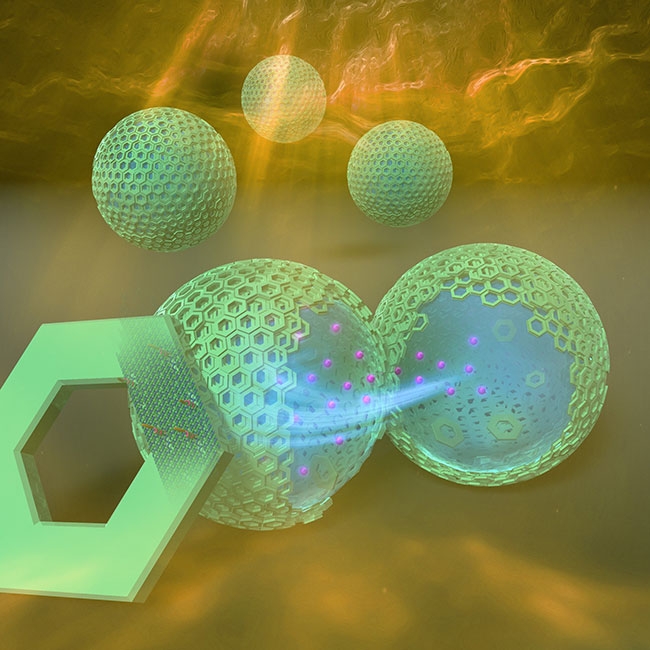 DNA-based, self-assembled nanostructures are promising building blocks for new kinds of micro- and nanodevices for biomedical and environmental applications. Much research is currently focused on adding functionality to such structures in order to expand their versatility.

For example, engineered capsules called liposomes that have a lipid-bilayer membrane are already successfully being used as sensors, diagnostic tools and drug delivery systems. Another group of capsules that do not have a lipid bilayer but are instead composed of colloidal particle membrane, known as Pickering emulsions1 or colloidosomes, also have potential for many biotechnologically useful applications.

Now, a research group led by biophysicist Masahiro Takinoue of Tokyo Tech reports a new type of Pickering emulsion with the added functionality of ion channels — an achievement that opens up new routes to designing artificial cells and molecular robots.

"For the first time, we have demonstrated ion channel function using pored DNA nanostructures without the presence of a lipid-bilayer membrane," says Takinoue.

The team's design exploits the self-assembling properties of DNA origami nanoplates2. The resulting Pickering emulsions are stabilized by the amphiphilic3 nature of the nanoplates. (See Figure 2.) 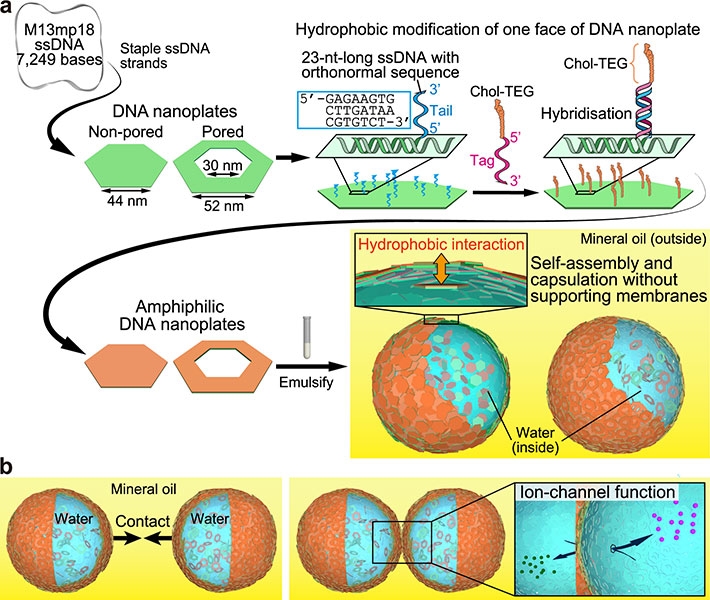 (a) Two types of DNA nanoplates (non-pored and pored) were constructed and modified to confer hydrophobicity to one face of the nanoplates. The resultant amphiphilic DNA nanoplates self-assemble at the oil–water interface to form emulsion droplets, or microcapsules, even without any supporting membrane such as lipid membrane.
(b) The nanopores were successfully shown in this study to function as ion channels between two microcapsules.

One of the most exciting implications of the study, Takinoue explains, is that it will be possible to develop stimuli-responsive systems — ones that are based on the concept of open–close switching. Such systems could eventually be used to develop artificial neural networks mimicking the way the human brain works.

"In addition, a stimuli-responsive shape change of the DNA nanoplates could serve as a driving force for autonomous locomotion, which would be useful for the development of molecular robots," Takinoue says.

The present study highlights the team's strengths in combining DNA nanotechnology with a perspective grounded in biophysics and soft-matter physics.

Microcapsules formed by the assembly of colloidal particles at the interface of emulsion droplets.

A term describing compounds that have both hydrophilic and lipophilic properties, meaning that they have a good affinity for water and oil.