This "Spotlight" series features a laboratory from the Department and introduces you to the laboratory's research projects and outcomes. This time we focus on Kondoh Laboratory. 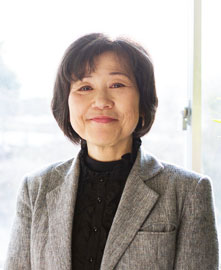 Nowadays, one of two people experiences cancer in life. Long-term cure of the diseases is still challenging even with the most advanced therapy. In Kondoh laboratory, we have brought advanced biotechnologies in cancer research field to develop innovative therapeutic strategies based on medicine-engineering collaboration.

Development of peptide drugs as an antibody drug alternative
Small proteins/peptides that have a high affinity for cancer cell surface markers (antibody mimetics) are promising low-cost alternatives to antibody. Therefore, various types of antibody mimetics have been extensively developed. We recently found that peptides structurally constrained in a protein scaffold were able to bind to their target molecule more strongly and specifically than the fluctuating them. Currently we are optimizing the scaffolds in order to increase binding activity of antibody mimetics to the levels comparable to antibody.

It is increasingly recognized that tumor-specific microenvironment critically direct tumor malignant processes. Understanding of microenvironmental regulation of tumor malignancy would pave the way to develop novel therapeutic strategies. However, traditional "static" biological assays are not sufficient to precisely dissect the mechanisms regulated by "dynamic" tumor microenvironment (TME). We thus have developed imaging tools to noninvasively monitor TME such as intratumoral hypoxia. We currently work on development of new bioluminescence imaging tools that allow for multifaceted approaches to understand tumor malignancy process regulated by TME.

Metastasis remains a major cause of death from solid tumors. Understanding of critical mechanisms regulating metastasis holds a promise to improve prognosis of patients and overcome cancer diseases in the future. Metastasis is a highly complex process including multi-step cascade. To fully understand this process, interactions between cancer cells and stromal environments are critically important as well as genetic characterizations of cancer cells. To address this issue, we have combined traditional biological approaches with noninvasive imaging, unique animal models and bioinformatics. In particular, we currently study on lung metastasis of osteosarcoma and bone metastasis of prostate cancers.

Fig5. Interactions between cancer cells and tissue stromal cells in a metastatic process