On October 3, the Nobel Foundation announced that Tokyo Institute of Technology Honorary Professor Yoshinori Ohsumi will be awarded the Nobel Prize in Medicine or Physiology. This award will be made in recognition of his discoveries of mechanisms for autophagy.

As the Nobel Prize announcement time of 6:30 p.m. approached, Ohsumi, the Ohsumi lab members, and the press corps assembled in Ohsumi's office to watch the live broadcast from Stockholm. Upon announcement that Ohsumi was the lone recipient for 2016, the anticipation of the years and days leading up to the prize transformed to relief and excitement, with all present sharing in the wonderful news that Ohsumi's important contribution has been recognized by the most important prize in science. 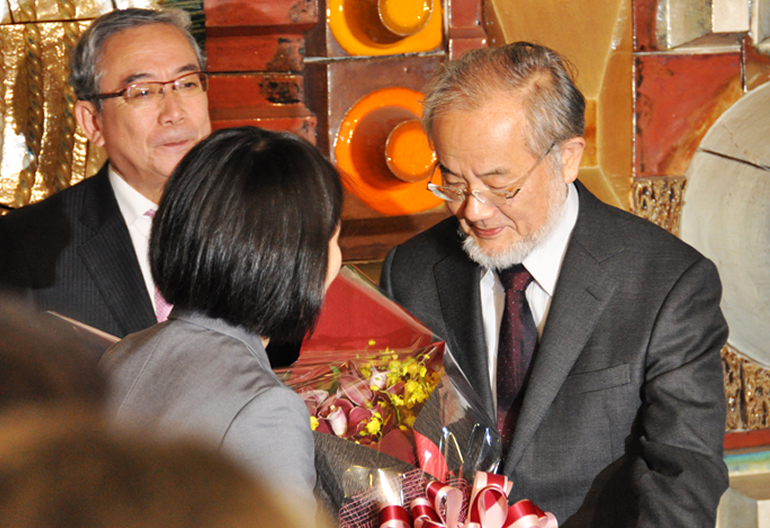 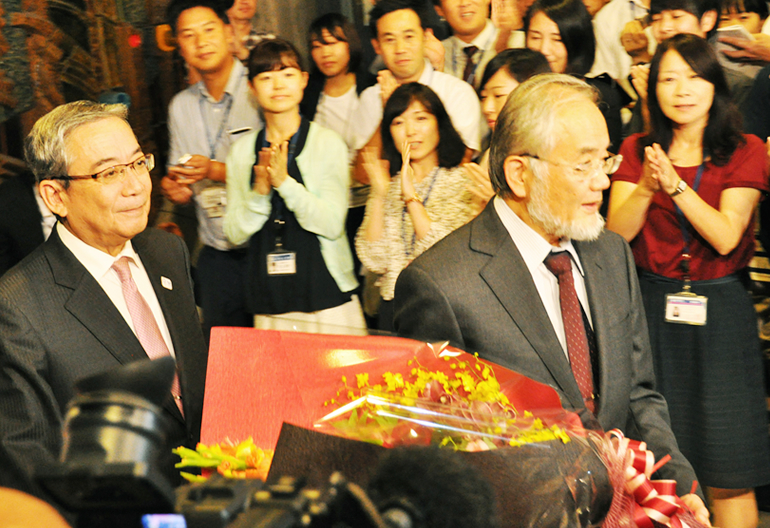 After traveling from Suzukakedai Campus to Ookayama Campus, Ohsumi receives flowers in celebration of the award of the 2016 Nobel Prize 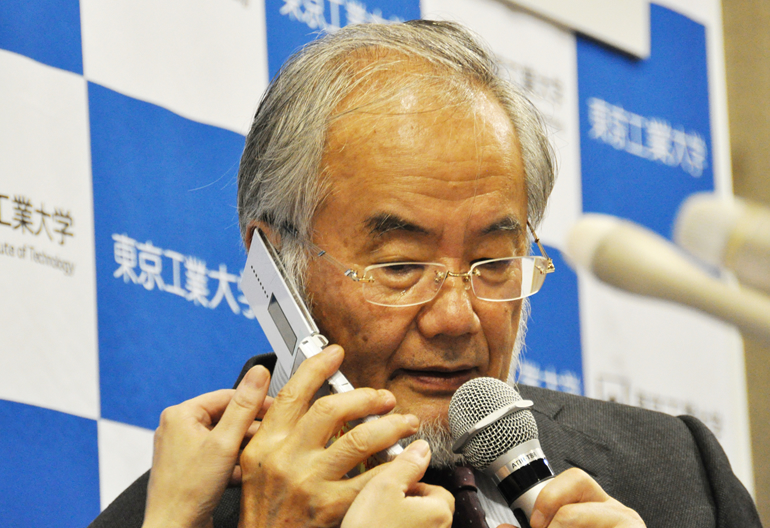 Following this, Tokyo Tech held a press conference at Centennial Hall of the Ookayama Campus from 8 p.m. Ohsumi appeared with Tokyo Tech President Yoshinao Mishima and Executive Vice President for Research Makoto Ando. Over 200 members of the press corps attended the press conference, where Ohsumi outlined his thoughts and happiness on receiving the prestigious award. Over the hour-long event, Ohsumi also gave a description of how autophagy works and the importance of the field for science. 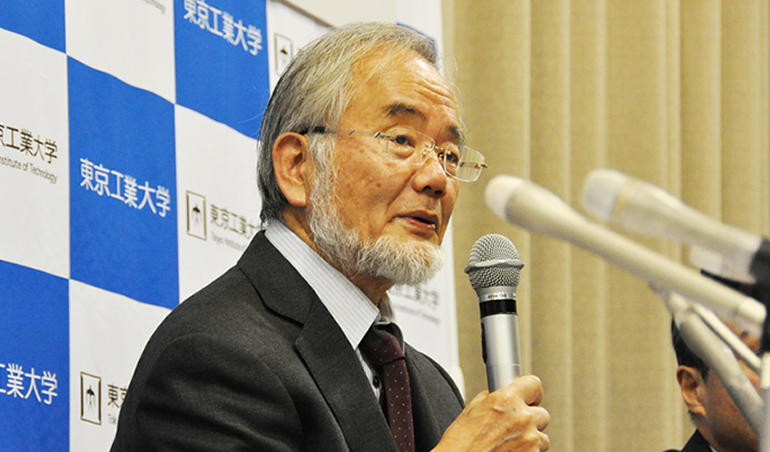 Professor Ohsumi made the following comments at the press conference:

As the fundamental unit of life, the question of how dynamic the cell is has always captivated my intellectual curiosity. This strong motivation led me to use yeast, the humble single-cell organism, to address some of the important basic questions of life. My work with yeast stemmed from a personal desire to undertake work that is unique and doesn't follow the intellectual trends of the day.

About 27 and a half years ago, in 1988, I had a strong interest in the practical degradative function of the vacuole in the cell. Around this time, I started my own laboratory at the College of Arts and Sciences at Tokyo University with only one member - myself - and this is where my 28 years of autophagy research began. I imagine that many people will not have heard of autophagy, but simply put the term describes the process of self-digestion of cellular proteins that occurs when yeast cells are subjected to starvation. My work started when I devised a method to capture this process using a light microscope, which is a ubiquitous piece of equipment in biological laboratories. The work of Misuzu Baba, who joined my lab and conducted electron microscopy of the process in yeast, confirmed that what we could see under the light microscope was actually exactly the same process as a phenomenon that had been observed decades earlier in mammalian cells but was never understood.

Yeast is an excellent tool for genetic analysis, so we therefore immediately began the process of identifying genes essential for autophagy to occur. Fortunately, we were able to identify many indispensable autophagy genes in a very short period of time thanks to the efforts of a graduate student who joined my lab, Miki Tsukada. Our next set of experiments revealed that these genes are in fact responsible for the membrane rearrangements that are an essential part of the autophagy process. We also found that these genes are very well conserved, and that homologues for most exist in human and plant cells. The identification of genes required for autophagy has really had a lasting impact on the quality of autophagy research that continues to this day. After that point, the mechanisms and function of autophagy genes were studied by us and numerous other researchers and laboratories around the world, with many fascinating insights that continue to emerge today. 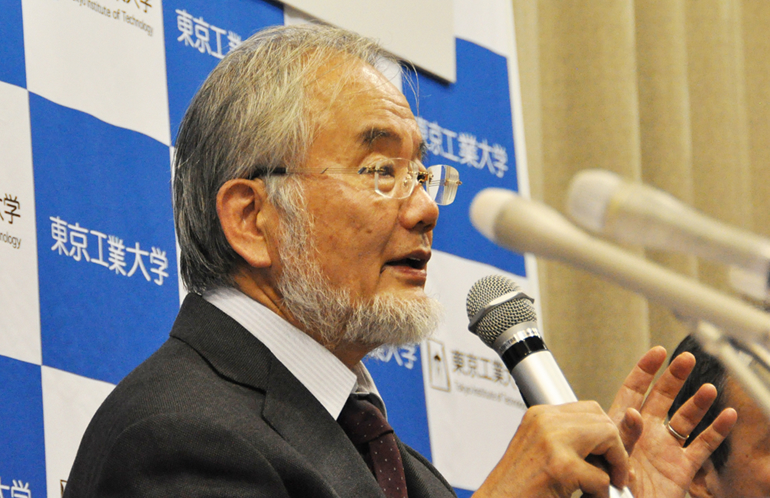 For my entire career, I have primarily used yeast in my studies of autophagy. As a practitioner and strong believer in the importance of fundamental research, there is no greater happiness than what I feel sitting before you today looking back at the revolutionary impact of my fundamental work using yeast. Of course these days it is impossible to conduct biological research as an individual and I have really been fortunate to have worked with the students, postdoctoral researchers, and staff whose efforts and support helped to transform the field over the past 28 years. Specifically, I would like to acknowledge the work of Noboru Mizushima and Tamotsu Yoshimori, who took our work in yeast to mammalian cells and triggered a whole new field of research in its own right. I would like to share the honor of this award with these two, who have played a very large part in the development of the field as a whole. As autophagy is such a fundamental process in the cell, I am looking forward to uncovering the links between autophagy and other cellular processes in the coming years.

One thing I would like to emphasize on this auspicious occasion is that when I started out, I had no idea that autophagy would be linked to cancer, other diseases or longevity. If nothing else, I want everyone to understand that the nature of fundamental research is such that it develops in ways that are sometimes not initially anticipated but have an immense and beneficial impact on society. The importance of fundamental research, which on this occasion has been recognized by the most prestigious award in science, is worth restating.

I would further like to thank the College of Arts and Science of the University of Tokyo, the School of Science at the University of Tokyo, the National Institute of Basic Biology and Tokyo Institute of Technology for giving me the opportunity to conduct research. The majority of my work over nearly three decades was supported by the Grants-in-Aid program of the Ministry of Education, Culture, Sports, Science and Technology and I greatly appreciate the role that funding bodies play in fundamental research. I would also like to thank two former teachers who supported me over many years: Kazutomo Imahori, who unfortunately passed away in May this year, and Yasuhiro Anraku. I'd like to express my gratitude to my late parents, who took great care of me during the very difficult years following the end of the Second World War. I'd like to finally thank my family, and especially my wife Mariko, who supported me at every stage of a long and devoted career.

I'd like to start by thanking you all for your attendance tonight. We are extremely happy that Professor Ohsumi has received this outstanding award and it is a great honor for our university. I am in awe of the devotion of Professor Ohsumi to basic research, his uniqueness as a researcher and his tenacious approach to science and I believe that these exemplary qualities are what has led him to stand here before you today as a truly great scientist. We are extremely pleased at Professor Ohsumi's commitment to basic science and the development of society through important research and am honored to be associated with him. Professor Ohsumi, on behalf of the Institute I offer you our most sincere congratulations for this remarkable achievement. 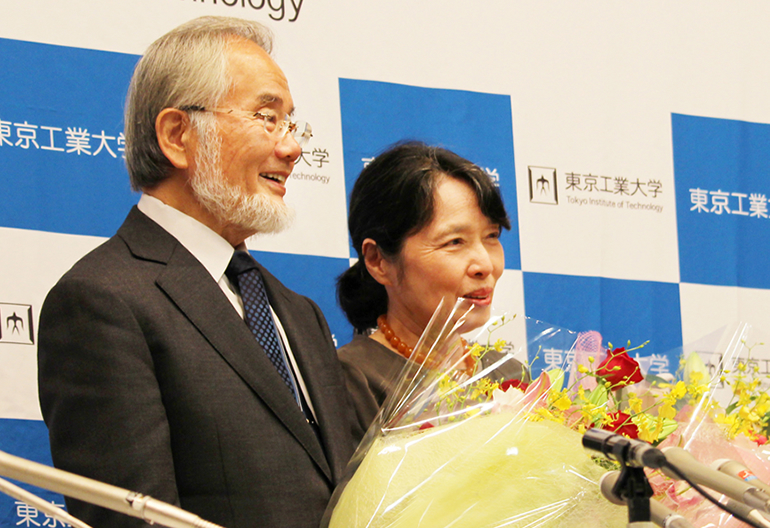 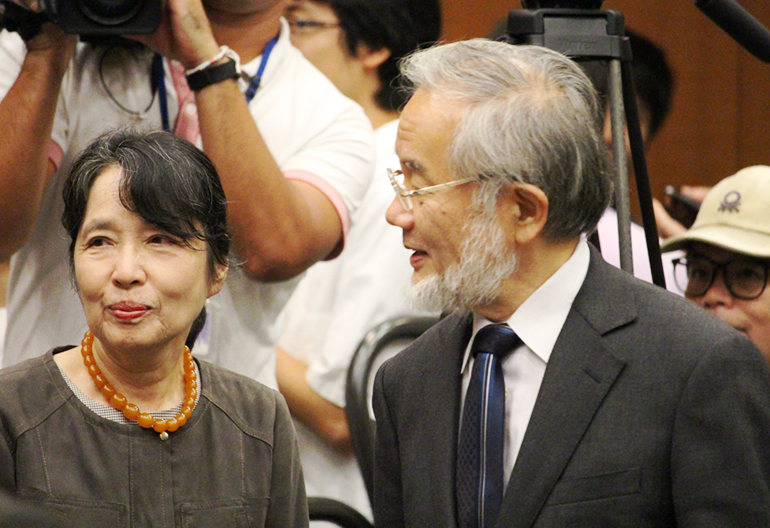 Ohsumi and his wife, Mariko, at the second press conference at Suzukakedai

The award of the Nobel Prize for Medicine or Physiology to Professor Ohsumi marks the second time that a Tokyo Tech researcher has been awarded the Nobel Prize, with university graduate Hideki Shirakawa winning the Nobel Prize in Chemistry in 2000.

Tokyo Tech has this year launched a new research body, the Institute for Innovative Research, as part of a university-wide program to further enhance top-level research.

Center for Public Affairs and Communications, Tokyo Institute of Technology