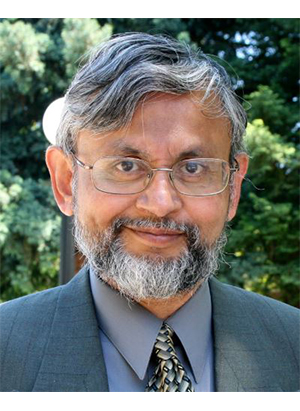 Abstract: We discuss problems that can be applied to controlling the rotational motion of human eyes. The Eyes move to acquire a point target and the control task is to direct the eye-pair towards the general target direction and, if the target is close by, to focus on the target. Roughly speaking, the former task is accomplished by versionaleye movements and the latter task of pinpointing the eyes on a specific point is accomplished by vergenceeye movements. In this talk we propose to address an unresolved open question –Are the two eyes controlled separately or synchronously? Using a dynamic model of the eye movement system, introduced recently in our laboratory, we compute the optimal energy required by the two eyes to separately track a chosen target trajectory. Subsequently we control the versionaleye movement using a synchronous control and the vergencecomponent as an additional control separately for both the eyes. The versionalcontroller is synthesized using a minimum energy or minimum arc length optimal control system. The total energy required for the synchronous controller is compared with the total energy required for the independent controller and the results will be discussed in the talk.

Biography: Bijoy received the B. Tech and M. Tech degrees in Electrical and Electronics Engg. from BITS Pilani and the Indian Institute of Technology, Kanpur, India, and the Ph.D. degree in Engineering Sciences from the Decision and Control Group of the Division of Applied Sciences, Harvard University, Cambridge, MA, in 1977, 1979 and 1983, respectively. From 1983 to 2007 Bijoy was with the Department of Electrical and Systems Engineering, Washington University, St. Louis, MO, USA, where he was a Professor and Director of the Center for BioCybernetics and Intelligent Systems. Currently he is the Dick and Martha Brooks Regents Professor of Mathematics and Statistics at Texas Tech University, Lubbock, TX, USA. He received the Donald P. Eckmann award in 1988 from the American Automatic Control Council, the Japan Society for the Promotion of Sciences Invitation Fellowship in 1997, the Chnese Academy of Science Invitation Fellowship in 2016. He became a Fellow of the IEEE in 2000, and a Fellow of the International Federation on Automatic Control in 2014. Currently he is the IEEE Control Systems Society Representative to the IEEE-USA's Medical Technology Policy Committee. Bijoy had held visiting positions at Tokyo Institute of Technology, Osaka University and Tokyo Denki University, Japan, University of Padova in Italy, Royal Institute of Technology and Institut Mittag-Leffler, Stockholm, Sweden, Yale University, USA, Technical University of Munich, Germany, Chinese Academy of Sciences, China and Indian Institute of Technology, Kharagpur, India. Bijoy's current research interest is in BioMechanics and Control.