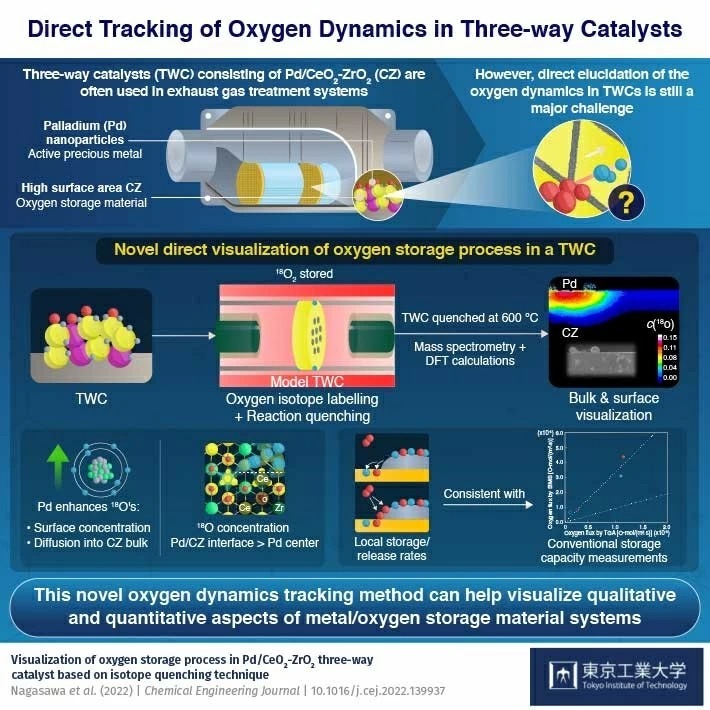 In light of vehicular pollutants contributing to decreasing air quality, governments across the globe are posing stricter emission regulations for automobiles. This calls for the development of more efficient exhaust gas after-treatment systems (i.e., systems to "clean" exhaust gas before it is released into the atmosphere). The most common mode for treating exhaust emissions of gasoline-fueled internal combustion engines are three-way catalysts (TWCs) or catalytic converters. TWCs often comprise active metals such as platinum (Pt) and palladium (Pd) nanoparticles and oxygen storage materials with a high specific surface area, such as a solid solution of CeO2-ZrO2(CZ). These components can catalyze multiple oxidation and reduction reactions that can convert harmful exhaust from vehicular engines to harmless gases.

In a recent breakthrough published in Chemical Engineering Journal

, however, a team of researchers led by Assistant Professor Tsuyoshi Nagasawa of Tokyo Institute of Technology (Tokyo Tech) presented a solution to the problem. The team developed a novel technique for direct visualization of the oxygen storage process in Pd/CZ TWCs using the isotope quenching technique. Prof Nagasawa explains: "It is difficult to get clarity on the dynamic interactions—such as oxygen adsorption/desorption and surface/bulk diffusion—occuring on TWC surfaces, because they can only be estimated indirectly from the valence change of cerium in CZ, or the oxidation state of the noble metal. However, our method surpasses these problems by incorporating isotope labeling with reaction quenching, which allows us to investigate the oxygen storage processes by tracking the 18O isotope involved in these interactions."

How was this isotope quenching technique carried out? The team prepared a model TWC consisting of a precious metal, Pd, and a dense CZ substrate, stored 18O2 in it at 600 °C, and then quenched the catalyst using two helium gas nozzles covered in a water cooling jacket. They then used high-resolution secondary-ion mass spectrometry to analyze the 18O distribution on the surface and bulk of Pd/CZ.

The results indicated that Pd improves the diffusion depth of 18O into CZ bulk, as well as its surface concentration. It further revealed that 18O was preferentially adsorbed at the Pd/CZ interface as compared to the Pd center, where its concentration was lower. Density functional theory calculations also agreed with these observations.

This new visualization process provides useful insights into the oxygen storage and release mechanisms in metal/oxygen materials systems and can be used to further investigate and improve the performance and efficiency of TWCs used for automobile exhaust treatment. "The volatile organic compounds and oxides of nitrogen and carbon commonly produced by combustion engines, if released without treatment, can not only cause breathing-related health issues but can also indirectly impact the acceleration of global warming. With our study, we wanted to contribute towards the world's mission to achieve better emission practices," concludes Prof. Nagasawa.