The novel flight style that helps the smallest beetles to excel

An international team of researchers describes in detail the mechanisms of the extraordinarily fast flight of the smallest free-living insects, beetles of the featherwing family (Ptiliidae). The team includes members and a student of Lomonosov Moscow State University (Russia) and members of Skoltech (Russia), the University of Rostock (Germany), Tokyo Institute of Technology (Tokyo Tech, Japan), and Chiba University (Japan). The effort is spearheaded by Alexey Polilov, head of the Department of Entomology, Faculty of Biology, Lomonosov Moscow State University. Associate Professor Ryo Onishi at Tokyo Tech and the other main author of this paper, Dr. Dmitry Kolomenskiy, who was then a specially appointed associate professor in the Onishi's Laboratory, contributed mainly to the construction of the flight dynamics model using the Tokyo Tech's TSUBAME 3.0 supercomputer

The results of the study were published

in the leading international scientific journal Nature.
The smallest flying insects have peculiar bristled wings, a condition known as ptiloptery, evolved independently during miniaturization in several insect lineages. Smaller flying animals generally fly at lower speeds than larger ones, but the recent measurements by members of the same team have shown that beetles of the family Ptiliidae, which includes the smallest free-living (nonparasitic) insects, fly as fast as their relatives that are three times as large. The Nature paper describes the peculiar ptiliid flight style in detail and shows how these bristled wings, the mass of which is much smaller than that of membranous wings of the same size, work efficiently in such minute insects, for which, as a consequence of their size, the forces of viscous friction are of the same order of magnitude as inertial forces. This makes the flapping flight of the studied insects somewhat similar to the rowing type of swimming found in some of the smaller aquatic crustaceans, such as Cladocera or Anostraca.

The team behind the study investigates the flight of microinsects and has recently shown that it is not only more peculiar but also more efficient than previously thought. The purpose of this work is to shed more light on miniaturization (the evolutionary trend towards extreme diminution), which independently took place in several groups of insects. As a result of miniaturization, among beetles, wasps and some other insects there are species in which the adult is less than 0.5 mm long, i.e., even smaller than some unicellular protists, such as Amoeba proteus. Despite their extremely small size, these tiny insects are multicellular animals capable of advanced behavior and complex movements, including those that allow most of them to fly. 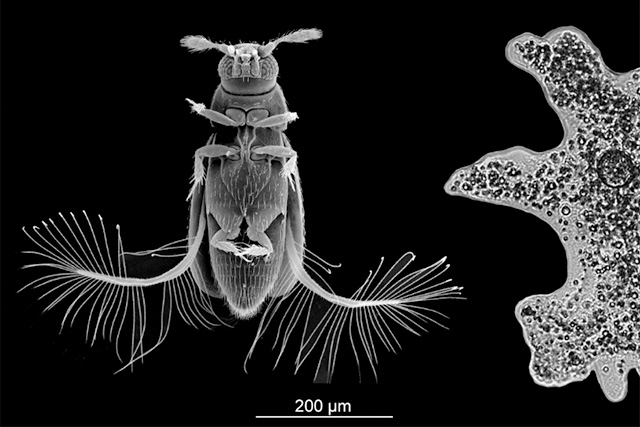 The effects of miniaturization on the structure and functions of body systems remain poorly understood. Investigating this issue, the team recently found that miniature featherwing beetles (representatives of the family Ptiliidae) fly as fast as much larger representatives of related beetle families. Their maximum accelerations are also surprisingly high, and in terms of the number of body sizes covered in flight per second they surpass all animals for which this parameter has been measured to date. But the mechanism of their flight remained unknown.

Fig2.
The setup designed and constructed by Sergey Farisenkov for high-speed recording of the free flight of microinsects under infrared LED and laser illumination using four synchronized cameras. Photo from the archive of the Department of Entomology, Faculty of Biology, Lomonosov Moscow State University

The study combines modern morphological methods, three-dimensional reconstructions of the movement of body parts in flight, and new approaches in computational aerodynamics. All these methodologies together revealed the mechanism of flight that helps the smallest beetles to excel at flight. This mechanism was studied using the example of one of the smallest beetles, Paratuposa placentis, whose adult body length is less than 0.4 mm. It is shown that the surprisingly efficient flight of these beetles is facilitated by the following adaptations. First, their wings are extremely light, because, unlike the wings of large beetles, these have a very narrow wing blade with a fan of long peripheral bristles (a condition known as ptiloptery, which means featherlike wing). Moreover, in the smallest beetles these bristles are covered with outgrowths (making the bristles brush-like), which render the wing even lighter without making it much more permeable to the air. Second, these beetles have a flight style previously unknown and described for the first time in this paper. As in other flying beetles, Paratuposa placentis uses for flight its hindwings, which at rest are folded under the rigid elytra (the modified forewings). The bristled hindwings move along an unusual trajectory, shaped like a broad figure eight, and make rowing movements alternating with claps both above and below the body of the beetle. 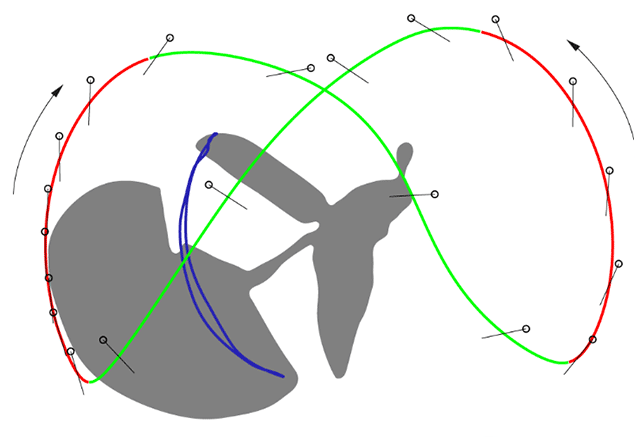 Fig3.
Trajectories of the tips of the wings (upstroke red, downstroke green) and elytra (blue) in the featherwing beetle Paratuposa placentis in lateral view. Modified from Farisenkov et al. (2022)

The studied beetles were captured in Vietnam. They were placed in a transparent chamber, where their flight was filmed on two high-speed video cameras. From the video recordings, a three-dimensional reconstruction of the movements of the wings, elytra, and body was produced, which made it possible to perform accurate aerodynamic calculations using special software. The structure of the wings was studied using scanning electron and confocal laser microscopes. Such a comprehensive study enabled the first detailed description and analysis of the mechanism of flight for a microinsect. 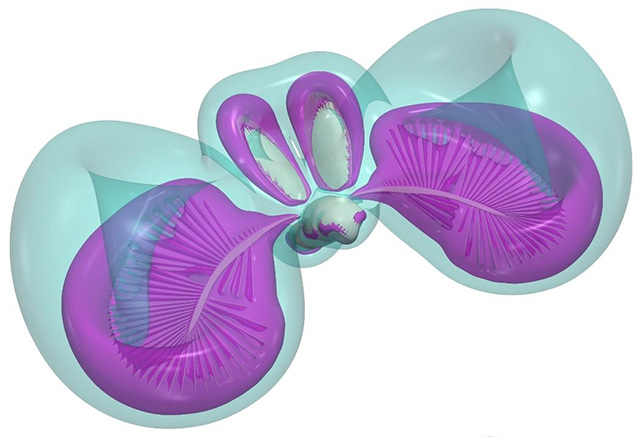 Fig4.
Three-dimensional visualization of the rotational velocity of the air flows during the flapping of the wings in the beetle Paratuposa placentis. Modified from Farisenkov et al. (2022)

For insects as small as featherwing beetles, the forces of viscous friction are quite high relative to the inertial forces and weight of the body and of particular body parts of these insects. As a result, during flight air sticks to the peripheral bristles of their wings due to high viscous friction and closes the gaps between them, barely passing through between the bristles. Being much lighter (and thus subject to much smaller inertial forces) than a membranous wing of the same size, the bristled wing rows almost as well, without letting much air through, like the feather of a bird. At the same time, under such conditions, the lift generated by the wing is insufficient to support the body weight. This is why a considerable part of the aerodynamic forces created by the tiny beetle in flight is due to the drag of its wings moving at high angles of attack. This flight style is in many ways similar to the rowing type of swimming found in some crustaceans, such as Cladocera or Anostraca (which swim using their branched antennae and branched legs, respectively): The wings make rowing movements, and then collapse and return to their original position for the next stroke. The elytra of ptiliid beetles move much more vigorously, with a greater angular amplitude, than in most larger beetles. It is shown in the paper that moving this way the elytra serve as inertial brakes, preventing the body from too much oscillation that would otherwise result from moving the wings in the peculiar fashion described above. 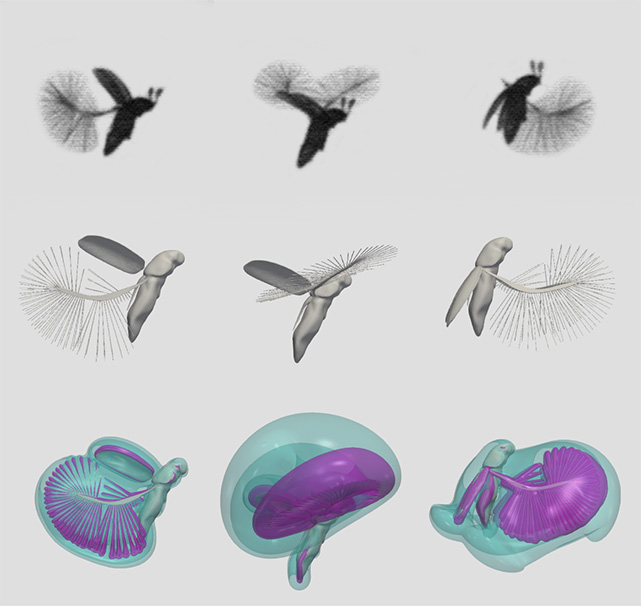 The team now plans to study the flight of other miniature insects in as much detail. This work has already started with some such insects, using the same set of methods. The wing apparatus of many other tiny insects is arranged somewhat differently, because their miniaturization took place independently. Therefore, further research is expected to reveal more secrets of the flight of such insects. Studying the aerodynamics of miniature bristled wings is an important objective, because similar flow conditions are typical for many miniature things, both natural and artificial. New knowledge about the flight of microinsects helps to better understand their biology, dispersal potential, and roles in ecosystems. Furthermore, the principles of the flapping flight of insects are already being used by engineers in the design of experimental unmanned aerial microvehicles. Miniaturization is a widespread trend not only in the evolution of certain groups of animals, but also in the development of technology, and in distant future, knowledge about the flight of microinsects may help engineers create flying devices as small as the smallest flying insects — or at least as small as some of the larger microinsects.
"To study miniature insect aerodynamics, we relied on specialized computational techniques. Traditionally, there are two distinct computational approaches to this. The first one is used to model large flying and aquatic animals and the second one applies to flagellates. The air motion close to an individual bristle of a featherlike wing is extremely viscous, much like the liquid motion close to a flagellum. Yet on the scale of the insect body, the air motion is largely determined by the forces of inertia. The difficulty lies in the fact that bristle diameter is hundreds of times smaller than the body length. To address this, we developed an adaptive algorithm capable of describing motion on such different scales in detail and with arbitrary precision. We think it may prove useful for tackling a wide range of problems that call for multiscale modeling," study co-author, Skoltech Assistant Professor Dmitry Kolomenskiy added.