Bipolar Order: A Straightforward Technique to Have More Control Over Organic Thin Films

Scientists at the Tokyo Institute of Technology (Tokyo Tech) combine bipolar electrochemistry with a 1980s technique called electrolytic micelle disruption to produce patterned organic thin films. Their approach involves wirelessly inducing a desired potential distribution on a plate in an electrolytic cell to control the ‘popping’ of bubble-like micelles, which release their cargo to automatically form a film. Customized thin films produced with this inexpensive strategy could unlock applications in sophisticated biosensor systems and optoelectronics.

Modern and emerging applications in various fields have found creative uses for organic thin films (TFs); some prominent examples include sensors, photovoltaic systems, transistors, and optoelectronics. However, the methods currently available for producing TFs, such as chemical vapor deposition, are expensive and time-consuming, and often require highly controlled conditions. As one would expect, making TFs with specific shapes or thickness distributions is even more challenging. Because unlocking this customizability could spur advances in many sophisticated applications, researchers are actively exploring new approaches for TF fabrication.

In a recent study published in Angewandte Chemie International Edition, a team of scientists from Tokyo Tech found a clever and straightforward strategy to produce organic TF patterns with a controllable shape and thickness. The research was led by Associate Professor Shinsuke Inagi, whose group has been delving into the potential of bipolar electrochemistry for polymeric TF fabrication. In this peculiar branch of electrochemistry, a conducting object is submerged in an electrolytic cell, and the electric field generated by the cell’s electrodes causes a potential difference to emerge across the surface of the object. This electric potential can be large enough to drive chemical reactions on the surface of the introduced (and now bipolar) object. Noting that the potential distribution on the bipolar object simultaneously depends on multiple factors, Prof. Inagi’s team had previously leveraged this technique to achieve a good degree of controllability in fabricated polymeric TFs.

Now, Yaqian Zhou, a Ph.D. candidate in Prof. Inagi's team, combined bipolar electrochemistry with a unique strategy developed in the 1980s by Dr. Saji and colleagues, also from Tokyo Tech. This other method, called ‘electrolytic micelle disruption (EMD),’ basically consists in encapsulating an organic compound inside spherical structures called micelles, which are, like some soaps and detergents, composed of surfactant molecules. These surfactants molecules are special in that they tend to easily lose electrons when near a positively charged electrode; this destabilizes the micelles and releases the organic compounds trapped within, which then accumulate and form a film. 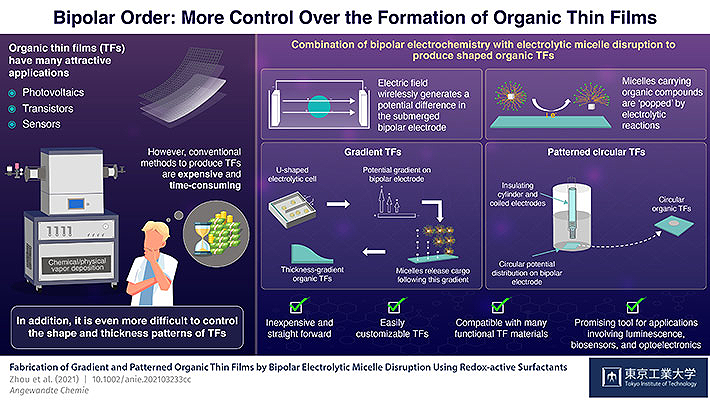 The team employed special bipolar electrochemical cells with different configurations to control the potential distribution induced wirelessly on a plate, creating, for example, a voltage gradient along a direction or a circular area with a positive potential zone. They then introduced micelles loaded with a desired organic compound. The catch is that these micelles "popped" more frequently on the more positively charged regions on the bipolar plate. Thus, as they released their cargo, the thin films that automatically formed closely resembled the induced voltage distribution, providing an interesting degree of customizability. "We managed to produce a variety of thickness-gradient and circular organic thin films in proof-of-concept experiments, which confirmed the validity of our proposed approach," highlights Prof. Inagi.

This novel strategy is remarkably inexpensive and makes customizable thin films much more accessible. Moreover, as Prof. Inagi explains, the technique is not limited to organic molecules and could be made compatible with polymers and carbon materials. "We've developed a promising tool for various applications that rely on thin films, not just in the field of luminescence, but also for more sophisticated areas like biosensor systems, due to the organic solvent-free and mild conditions required," he concludes. Hopefully, further improvements on this combined technique will help produce thin films that can satisfy all sorts of practical demands.