Smaller than Ever—Exploring the Unusual Properties of Quantum-sized Materials

Scientists at Tokyo Institute of Technology (Tokyo Tech) synthesize sub-nanometer particles with precisely controlled proportions of indium and tin using specific macromolecular templates called dendrimers. Through a screening process spanning different metallic ratios, they discovered unusual electronic states and optical properties originating from size-miniaturization and elemental-hybridization. Their approach could be a first step in the development of sub-nanoparticles with unique functionalities and characteristics for electronic, magnetic, and catalytic applications. 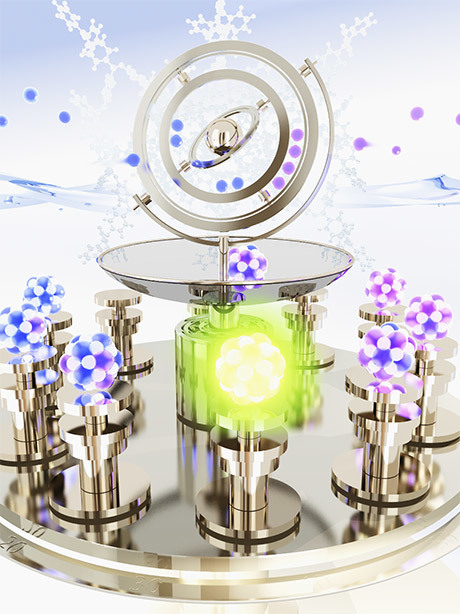 The development of functional nanomaterials has been a major landmark in the history of materials science. Nanoparticles with diameters ranging from 5 to 500 nm have unprecedented properties, such as high catalytic activity, compared to their bulk material counterparts. Moreover, as particles become smaller, exotic quantum phenomena become more prominent. This has enabled scientists to produce materials and devices with characteristics that had been only dreamed of, especially in the fields of electronics, catalysis, and optics.

But what if we go smaller? Sub-nanoparticles (SNPs) with particle sizes of around 1 nm are now considered a new class of materials with distinct properties due to the predominance of quantum effects. The untapped potential of SNPs caught the attention of scientists from Tokyo Tech, who are currently undertaking the challenges arising in this mostly unexplored field. In a recent study published in the Journal of the American Chemical Society

, a team of scientists from the Laboratory for Chemistry and Life Science, led by Dr Takamasa Tsukamoto, demonstrated a novel molecular screening approach to find promising SNPs.

As one would expect, the synthesis of SNPs is plagued by technical difficulties, even more so for those containing multiple elements. Dr Tsukamoto explains: "Even SNPs containing just two different elements have barely been investigated because producing a system of subnanometer scale requires fine control of the composition ratio and particle size with atomic precision." However, this team of scientists had already developed a novel method by which SNPs could be made from different metal salts with extreme control over the total number of atoms and the proportion of each element.

Their approach relies on dendrimers (see Figure 1), a type of symmetric molecule that branches radially outwards like trees sprouting form a common center. Dendrimers serve as a template on which metal salts can be accurately accumulated at the base of the desired branches. Subsequently, through chemical reduction and oxidation, SNPs are precisely synthesized on the dendrimer scaffold. The scientists used this method in their most recent study to produce SNPs with various proportions of indium and tin oxides and then explored their physicochemical properties. 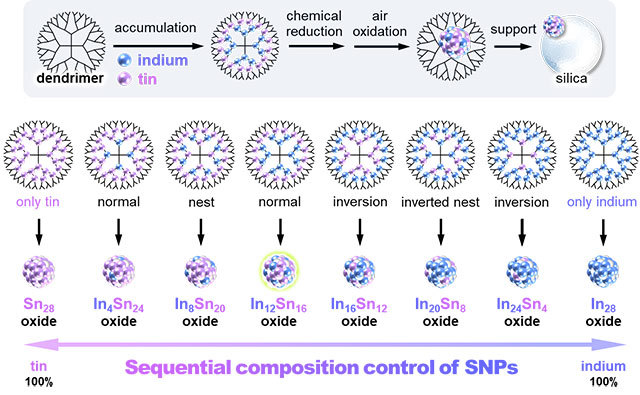 One peculiar finding was that unusual electronic states and oxygen content occurred at an indium-to-tin ratio of 3:4 (see Figure 2). These results were unprecedented even in studies of nanoparticles with controlled size and composition, and the scientists ascribed them to physical phenomena exclusive to the sub-nanometer scale. Moreover, they found that the optical properties of SNPs with this elemental proportion were different not only from those of SNPs with other ratios, but also of nanoparticles with the same ratio. As shown in Figure 3, the SNPs with this ratio were yellow instead of white and exhibited green photoluminescence under ultraviolet irradiation.

(Left) Scanning transmission electron microscopy image of an In12Sn16 oxide SNP. (Right) Unusual electronic states appear when the indium-to-tin ratio is 3:4 (that is, an SNP with 12 indium atoms and 16 tin atoms). This ratio is marked with a green star in the figure.

Exploring material properties at the sub-nanometer scale will most likely lead to their practical application in next-generation electronics and catalysts. This study, however, is just the beginning in the field of sub-nanometer materials, as Dr Tsukamoto concludes: "Our study marks the first-ever discovery of unique functions in SNPs and their underlying principles through a sequential screening search. We believe our findings will serve as the initial step toward the development of as-yet-unknown quantum sized materials." The sub-nanometric world awaits!