Scientists at Tokyo Institute of Technology have shown that copper oxide particles on the sub-nanoscale are more powerful catalysts than those on the nanoscale. These subnanoparticles can also catalyze the oxidation reactions of aromatic hydrocarbons far more effectively than catalysts currently used in industry. This study paves the way to better and more efficient utilization of aromatic hydrocarbons, which are important materials for both research and industry. 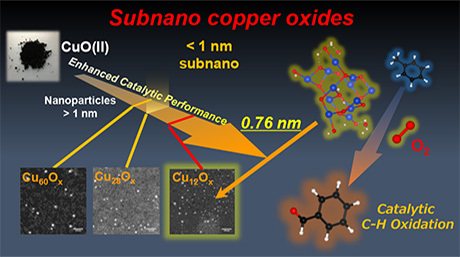 The selective oxidation of hydrocarbons is important in many chemical reactions and industrial processes, and as such, scientists have been on the lookout for more efficient ways to carry out this oxidation. Copper oxide (CunOx) nanoparticles have been found useful as a catalyst for processing aromatic hydrocarbons, but the quest of even more effective compounds has continued.

In the recent past, scientists applied noble metal-based catalysts comprising of particles at the sub-nano level. At this level, particles measure less than a nanometer and when placed on appropriate substrates, they can offer even higher surface areas than nanoparticle catalysts to promote reactivity (Fig. 1).

In this trend, a team of scientists including Prof. Kimihisa Yamamoto and Dr. Makoto Tanabe from Tokyo Institute of Technology (Tokyo Tech) investigated chemical reactions catalyzed by CunOx subnanoparticles (SNPs) to evaluate their performance in the oxidation of aromatic hydrocarbons. CunOx SNPs of three specific sizes (with 12, 28, and 60 copper atoms) were produced within tree-like frameworks called dendrimers (Fig. 2). Supported on a zirconia substrate, they were applied to the aerobic oxidation of an organic compound with an aromatic benzene ring. 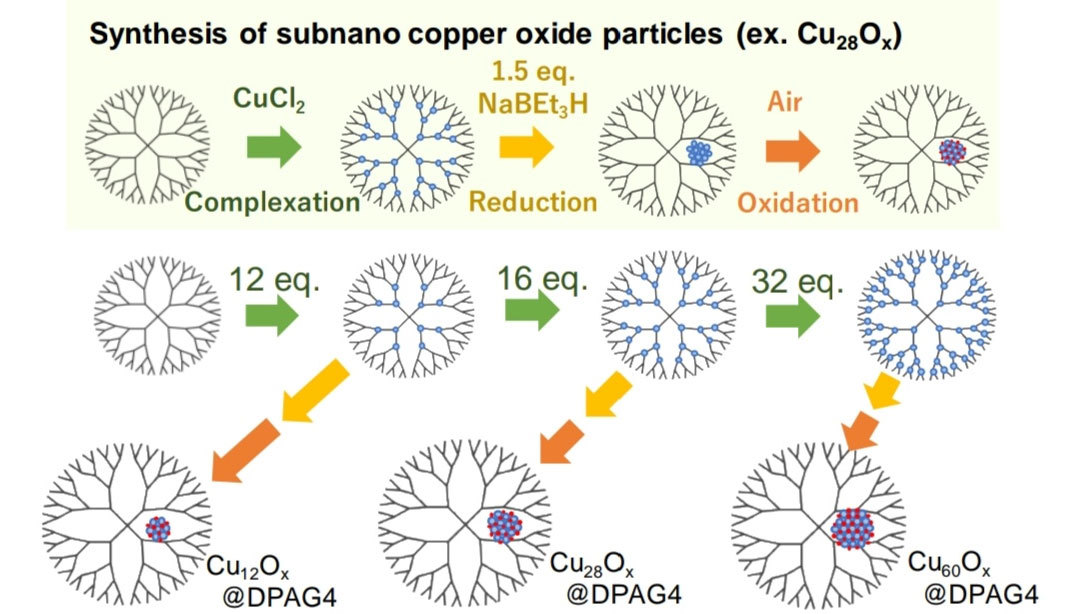 The XPS analysis and DFT calculations revealed increasing ionicity of the copper–oxygen (Cu–O) bonds as SNP size decreased. This bond polarization was greater than that seen in bulk Cu–O bonds, and the greater polarization was the cause of the enhanced catalytic activity of the CunOx SNPs.

Tanabe and the team members observed that the CunOx SNPs sped up the oxidation of the CH3 groups attached to the aromatic ring, thereby leading to the formation of products. When the CunOx SNP catalyst was not used, no products were formed. The catalyst with the smallest CunOx SNPs, Cu12Ox, had the best catalytic performance and proved to be the longest lasting.

As Tanabe explains, "the enhancement of the ionicity of the Cu–O bonds with decrease in size of the CunOx SNPs enables their better catalytic activity for aromatic hydrocarbon oxidations."

Their research supports the contention that there is great potential for using copper oxide SNPs as catalysts in industrial applications. "The catalytic performance and mechanism of these size-controlled synthesized CunOx SNPs would be better than those of noble metal catalysts, which are most commonly used in industry at present," Yamamoto say, hinting at what CunOx SNPs can achieve in the future.