Cross-linked polymers are structures where large molecular chains are linked together, allowing exceptional mechanical properties and chemical resistance to the final product. However, their modification is not easy. Now, scientists at Tokyo Institute of Technology (Tokyo Tech) develop a method that allows the fusion of different polymers together easily, allowing the precise tuning of the properties of the final material by selecting appropriate base polymers and mixing them at the right proportion. 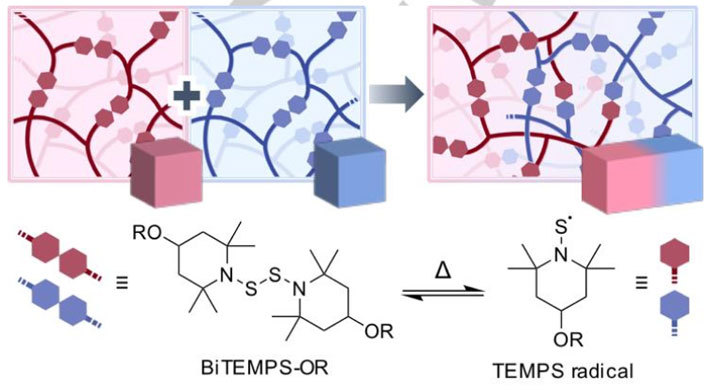 Polymers, large molecular chains composed of small repeating subunits, can be found all around us and also within us. DNA and proteins are some familiar natural polymers. In contrast, synthetic polymers, such as plastics, were first produced about a century ago, but have since then found their way into our everyday lives because of their amazing properties. Polymers can be tailored according to their constituent subunits to confer them with many desirable characteristics, such as mechanical strength, stretchability, permeability, and so on.

Another way to obtain even more functionalities in polymers is by cross-linking them. Cross-linked polymers (CPLs) are polymers that are linked together using special cross-linker molecules. Certain CPLs exhibit outstanding properties due to their interlocked tridimensional structures. Motivated by the potential applications, a research team from Tokyo Tech led by Professor Hideyuki Otsuka has recently achieved a breakthrough in this field: they managed to cross-link different CPLs together through an unprecedented approach. "The development of a novel method to fuse different CPLs would bring a revolution in the field, as their mechanical properties can be easily and systematically tuned in an operationally simple process," explains Otsuka.

The researchers achieved this feat by switching things up in the cross-linker molecule they used. For a CPL to have self-healing capabilities, which is very attractive for many applications, the polymers have to be joined by what is known as dynamic covalent bonds. These bonds also allow for fusing different types of CPLs, but the carbon molecules used in currently available linkers are prone to oxidizing, which complicates the fusion and processing of CPLs in bulk. What this research team did was employ a linker molecule, called BiTEMPS, that cross-links polymers through a central sulfur–sulfur (S–S) covalent bond. This bond can be temporarily cleaved in half at temperatures higher than 80°C, which allows for exchange among different polymer at the free ends, called TEMPS radicals (see Figure 1). Through this cleaving and re-joining process, different CPLs can be fused together. One of the main advantages of the TEMPS radicals is that they are highly stable against oxygen, meaning that all the processing can be done without requiring oxygen care.

To prove the usefulness of their approach, the researchers cross-linked two types of CPLs, one of them much more elastic than the other. By hot-pressing their mixture, they managed to fuse the CPLs together, and the mechanical properties of the final material were dependent on the ratio of the raw CPLs used. "The mechanical properties of the fused samples could be widely tuned to make them as soft and elastic as desired. As the variety of available polymers is almost infinite, it should be possible to generate materials that exhibit a broad spectrum of physical properties using our method by judiciously choosing appropriate polymer compositions and mixing ratios," concludes Otsuka. This innovative method will significantly advance the field of CPLs, allowing for the development of highly tailored materials for specialized applications.