Our search for sustainable energy generation technology has led researchers to investigate various materials and their combinations in many types of devices. One such synthetic material is called "perovskite", which is low-cost and easy to produce, and can be used in solar cells. Perovskite solar cells have attracted much attention because their power conversion efficiency (that is, their efficiency at turning sunlight into electricity) has seen dramatic improvements in recent years. However, it has proven difficult to implement them for large-scale energy generation because of a handful of issues.

One problem that perovskite solar cells face is reproducibility. This means that it is hard to consistently create perovskite crystal layers free of defects and holes, which means that deviations from design values are always likely to occur, which reduce their efficiency. On the bright side, researchers have found that the efficiency of these cells can be boosted by combining perovskite with carbon nanotubes (CNTs). The mechanism by which CNTs and perovskite bond together and how this affects the performance of CNT perovskite solar cells has not been studied in depth. In particular, the ability of pure CNTs to bond to perovskite is not very good, and this could compromise the structural and conducting properties at the interface of both materials.

Hence, a team from Tokyo Tech lead by Prof. Keiko Waki conducted a series of experiments on perovskite solar cells combined with different types of CNTs in an attempt to both improve their performance and stability and understand the underlying mechanisms. They used not just pure CNTs, but also CNTs that bore "oxygen-containing functional groups" in their structure, which have been known to strengthen the interaction between the CNTs and perovskite, resulting in better interfaces and enhancing the crystallization of perovskite.

This research consisted of several experiments that provided insight into many aspects of CNT–perovskite interactions. First, they demonstrated the superior electrical performance of cells with functionalized CNTs over those with pure CNTs and found evidence supporting that larger crystals and fewer surface defects occur when using functionalized CNTs. Then, the team inferred that the perovskite in the cells would undergo a recrystallization process if stored in the dark, and that the presence of the functional groups in CNT would have a significant effect on this process. This was confirmed by storing the cells for over two months and measuring their electrical characteristics afterwards (Fig. 1). "We have discovered the self-recrystallization ability of perovskite at room temperature, whose morphology greatly improved after long-term storage. However, the most interesting result was the ability of functionalized CNTs to make use of the self-recrystallization nature to form a stronger junction between the perovskite and CNTs through the reconstruction" explains Prof. Waki. Most notably, the functionalized CNTs improved the contact between the two materials greatly and the functional groups served as a protection against attacks from moisture on the perovskite, allowing the self-recrystallization and interface reconstruction to proceed without noticeable degradation. The research team also found that the recrystallization process could be immensely sped up by constantly subjecting the solar cells to frequent measurements, but this ultimately affected their stability and degraded them.

Such in-depth studies on perovskite solar cells and ways to enhance them are very valuable because they get us closer to new sources of clean energy. "We hope this study contributes toward the production of perovskites with higher stability and reproducibility," concludes Prof. Waki. These findings will serve as another stepping stone so that we may one see perovskite solar cells as a key technology to preserve our planet. 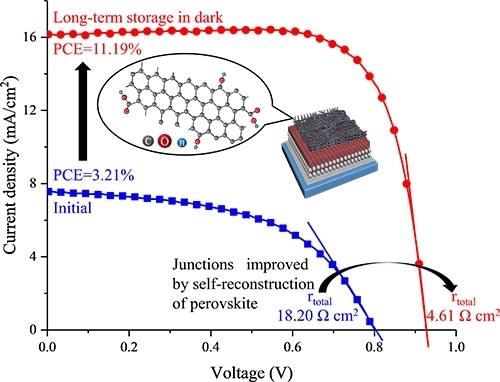