Expanding the limits of Li-ion batteries: Electrodes for all-solid-state batteries

Scientists at Tokyo Tech have addressed one of the major disadvantages of all-solid-state batteries by developing batteries with a low resistance at their electrode/solid electrolyte interface. The fabricated batteries showed excellent electrochemical properties that greatly surpass those of traditional and ubiquitous Li-ion batteries; thereby, demonstrating the promise of all-solid-state battery technology and its potential to revolutionize portable electronics.

The batteries were made by stacking various layers via thin-film deposition methods. The LNMO/Li3PO4 interface showed spontaneous migration of Li ions and had an unprecedentedly low resistance.

Many consumers are familiar with rechargeable lithium ion batteries, which have developed over the last few decades, and are now common in all sorts of electronic devices. Despite their broad use, scientists and engineers believe that traditional Li-ion battery technology is already nearing its full potential and new types of batteries are needed.

All-solid-state batteries are new type of Li-ion battery, and have been shown to be potentially safer and more stable energy-storing devices with higher energy densities. However, the use of such batteries is limited due to a major disadvantage: their resistance at the electrode/solid electrolyte interface is too high, hindering fast charging and discharging.

The structure of these all-solid-state batteries is shown in Figure 1. After fabrication, the electrochemical properties of these batteries were characterized to shed light on Li-ion distribution around the interface. X-ray diffraction and Raman spectroscopy were used for analyzing the crystal structure of the thin films comprising the batteries. Spontaneous migration of Li ions was found to occur from the Li3PO4 layer to the LNMO layer, converting half the LNMO to L2NMO at the Li3PO4/LNMO interface. The reverse migration occurs during the initial charging process to regenerate LNMO.

The resistance of this interface, verified using electrochemical impedance spectroscopy, was 7.6 Ωcm2, two orders of magnitude smaller than that of previous LMNO-based all-solid-state batteries and even smaller than that of liquid-electrolyte-based Li-ion batteries using LNMO. These batteries also displayed fast charging and discharging, managing to charge/discharge half the battery within just one second. Moreover, the cyclability of the battery was also excellent, showing no degradation in performance even after 100 charge/discharge cycles (see Figure 2). 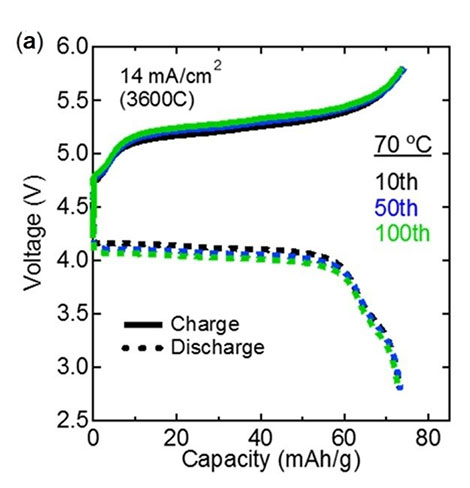 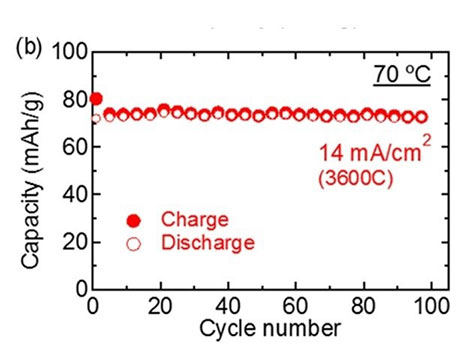 The (a) charge-discharge curves and the (b) cycling performance plot show that the performance of the fabricated all-solid-state batteries did not degrade after repeated use, demonstrating their excellent stability and the total reversibility of the reactions involved in charging/discharging.

Li(Ni0.5Mn1.5)O4 is a promising material to increase the energy density of a battery, because the material provides us of a higher voltage. The research team hopes that these results will facilitate the development of high-performance all-solid-state batteries, which could revolutionize modern portable electronic devices and electric cars.

School of Materials and Chemical Technology,