Nitrate deposits in the Arctic remains high even after the turn of the century, despite environmental policies adopted by neighboring countries in the late 20th century to cut nitrogen oxide (NOx) emissions. 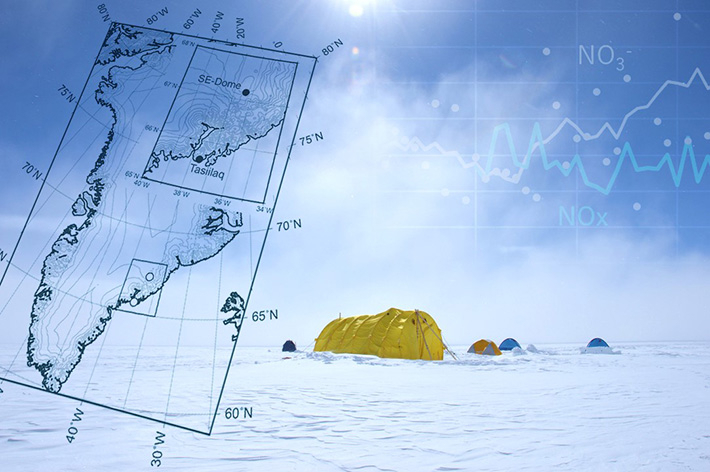 Aerosols less than 2.5 micrometers are known as particulate matter (PM) 2.5 and are hazardous to human health. Large aerosol particles, on the other hand, help form sun-blocking clouds that cool the Earth's surface. Concentrations of sulfide oxide (SOx) and NOx which can form aerosols were on the rise from the Industrial Revolution of the mid-18th century to 1980, causing serious air pollution in the 1970s and 1980s.

But regulations imposed by the United States, European countries and other developed nations have led to a reduction in SOx and NOx emissions since 1990s. That said, emissions from emerging economies such as China and India have remained high so far.

The team including Yoshinori Iizuka of Hokkaido University drilled a 90-meter ice core from the Southeastern Greenland Dome, an ice sheet dome in Greenland that has been used for research on atmospheric aerosol depositions in ice cores from 1957 to 2014. The core sample was kept frozen as it was transported to a cold room at the university's Institute of Low Temperature Science in 2015. Analysis of the ice core began the following year by melting it to measure the concentration of ions such as sulfate and nitrate.

In a previous study, the team succeeded in determining the precise ages of ice core over the six decades with an accuracy of a few months. In the study published in the Journal of Geophysical Research: Atmospheres, they proposed a dating method based on matching oxygen isotope variations between ice core records and simulations using isotope-enabled climate models – the close similarity of which allowed the precise determination of the ages. 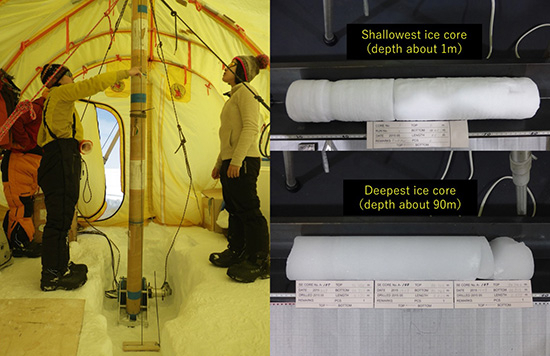 The researchers in the drilling operation (left) and the drilled samples (right).

In the present study published in the same journal, the team compared sulfate and nitrate fluxes in the ice core over the four decades with SOx and NOx emissions in the air.

To investigate the sources of the chemicals preserved in the ice core, transport pathways of air masses were analyzed using a method called Backward Trajectory Analysis. The results indicated that the highest percentage of air masses came from North America, while lower but still high percentages came from Europe and Russia. The researchers multiplied each region's NOx and SOx emissions by its air-mass contributions to calculate the volumes of NOx and SOx that reached the Southeastern Greenland Dome.

The results showed that the sulfate flux reflected the history of decreasing SOx emissions from neighboring countries, mainly the United States, where the researchers believe the emissions come from. In contrast, the decadal trend of nitrate flux differed from the trend of NOx emissions, which have been declining since the 1970s or 1980s. Nitrate flux in the ice core peaked in the 1990s, and levels in the 21st Century have remained higher than that those from the period from the 1960s to the 1980s, despite efforts by the United States and European countries reduce emissions.

While the cause of this discrepancy remains a mystery, the team is examining the complicated chemical changes involving NOx that occur during atmospheric transport as a possible cause. The team plans to conduct further research on this topic, as well as evaluate other chemicals preserved in the ice core.