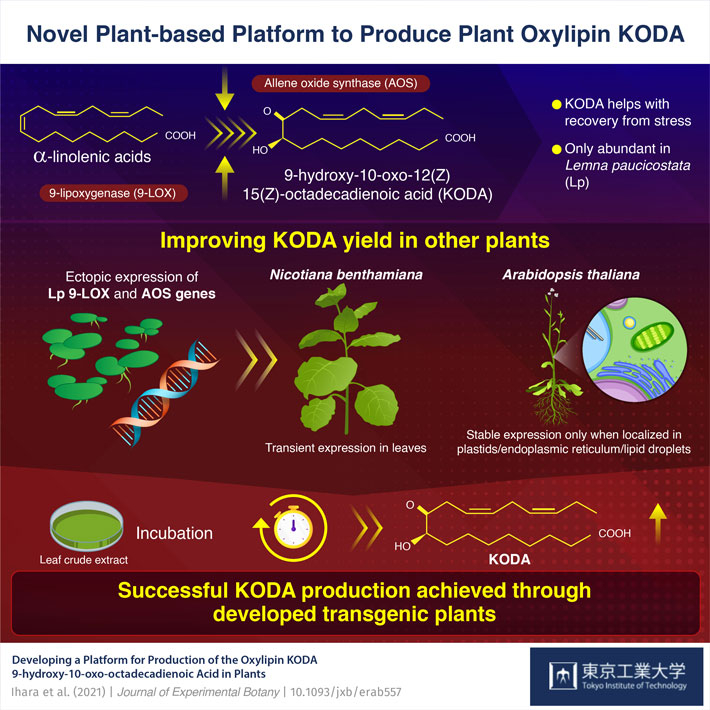 9-hydroxy-10-oxo-12(Z),15(Z)-octadecadienoic acid, or KODA, is an agrochemical belonging to the class of plant oxylipins. Oxylipins are oxidized fatty acids, mostly derived from polyunsaturated fatty acids like linolenic, linoleic, and roughanic acids or their esters. Oxylipins, including KODA, help plants recover from stresses like physical injury, infections etc. Many plants naturally synthesize KODA; however, the amount is usually low in most, an exception being the free-floating duckweed species, Lemna paucicostata.

How could this genetic advantage of duckweed be imbued in other plants? The answer, it seems, lies in advanced biotechnology. Researchers from Tokyo Institute of Technology (Tokyo Tech) have developed a system for improving KODA production in plants using transgenic techniques. They introduced key genes involved in enhanced KODA production in duckweed in two separate plant species—Nicotiana benthamiana, related to the tobacco plant, and Arabidopsis thaliana, the Thale cress.

The two key genes from the duckweed species that improved KODA production—9-lipoxygenase (or 9-LOX), and allene oxide synthase (or AOS), when ectopically expressed in the study species, led to improved yield of KODA in both plants. However, there was interspecies variation in terms of the localization of KODA in the two species. In Nicotiana benthamiana, transient expression of 9-LOX and AOS led to increased expression of KODA in the leaves. However, in Arabidopsis thaliana, to achieve sustained KODA biosynthesis, the proteins coded by the two genes had to be localized to the subcellular structures plastids, endoplasmic reticulum, or lipid droplets. These findings have been published as a research article in the Journal of Experimental Botany

Notably, in both the test plant models, the researchers were able to achieve better KODA production by incubating the leaf crude extracts over time. Explaining their technique further, Dr. Mie Shimojima, the corresponding author of the study, says, "By incubating the transgenic leaf crude extracts, we ensured the breakdown of certain lipids that release α-linolenic acid, which is the precursor of KODA. This led to an abundance of KODA over time."

An improved physiological level of KODA could be a blessing for crop growers trying to maintain respectable yields in the face of increasing environmental vagaries. As Dr. Shimojima notes, "We have not only found the key to improving KODA production in plants but have also opened doors for future research on other oxylipins in different plant species." In fact, the researchers strongly believe that their system could be adapted to mass produce diverse oxylipins for incorporation in fertilizers and pesticides.

Further studies are required for clarifying the effects of in planta-produced KODA on the physiology of plants. However, it may safely be said for the moment that the novel plant-based platform for improved KODA production, involving subcellular localization of key enzyme genes and incubation of the subsequent crude product, is a welcome development for the world of plant biotechnology.