On June 8th, Tokyo Tech held an online press briefing with Associate Professor Toshinori Fujie from the School of Life Science and Technology and Masato Saito, a 2nd year master's student at Fujie Laboratory. The researchers discussed their work on "applying the mechanism in induction cooktops to heat tissue wirelessly and with surgical precision."

Cancer thermotherapy: A treatment in need of miniaturization

Human cells are vulnerable to intense heat and die rapidly above 42.5°C. This property is utilized to treat cancer through a method called "thermotherapy" (also "hyperthermia"). The treatment has a long history, with even the ancient Greek physician Hippocrates being reported to use heat to eliminate cancer.

When tumor tissue is heated, the surrounding normal cells are also exposed to the heat. Although the blood vessels in normal tissue can dilate to release heat, the blood vessels in a tumor cannot, so only cancer cells reach a high temperature. It has also been reported that combining cancer thermotherapy (that works in this way) with radiation therapy and chemotherapy enhances the effect. 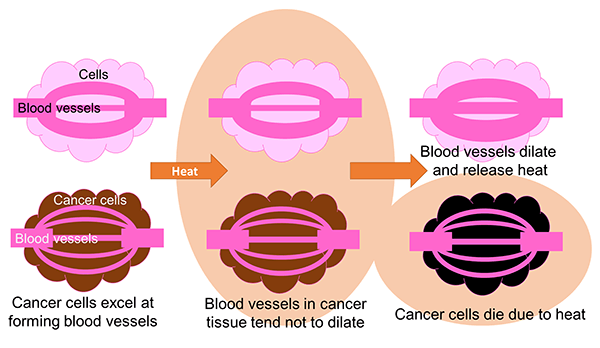 Although thermotherapy is promising as a cancer treatment, current methods require large devices for emitting radio waves or microwaves, so only a limited number of facilities are able to provide the treatment.

Wearing a watch or other device on the body can cause skin irritation due to the mismatch in softness. Soft materials such as rubber can be used to avoid the mismatch, but this in turn leads to durability issues. To resolve this, Fujie Laboratory is developing a highly flexible polymeric thin film. Making the polymeric thin film thinner also makes it softer, allowing for the creation of flexible, comfortable devices.

Using an inkjet printer with conductive ink to draw a circuit on the polymeric thin film, it is possible to create a device that emits light and energy locally, with promising applications in medical treatment.

Electricity is applied to a polymeric thin film with a circuit, illuminating a specific location. The circuit was screen-printed using commercially available carbon ink.

The prototype was made based on the concept that when a polymeric thin film is attached to tumor tissue in vivo, and an alternating magnetic field is applied from outside the body, the thin film generates heat by the same principle as an induction cooktop.

Induction heating is achieved by placing a conductor (often metal) in a magnetic field so it self-heats. It is widely used in cooktops.

Since the polymeric thin film is placed in vivo, the team decided to make it with biocompatible polylactic acid[1] and use gold nano ink[2] for inkjet printing. The gold nano ink needed to be heated to 250°C to remove the stabilizer and induce conductivity. So it was printed on polyimide film made of a polymeric material that can withstand high temperature treatment. After treatment at 250°C, it was transferred to a polylactic acid thin film. The thickness of the thin film is only 7 µm (10-6 meters), but it has the strength and flexibility to withstand handling with forceps used in endoscopic surgery. 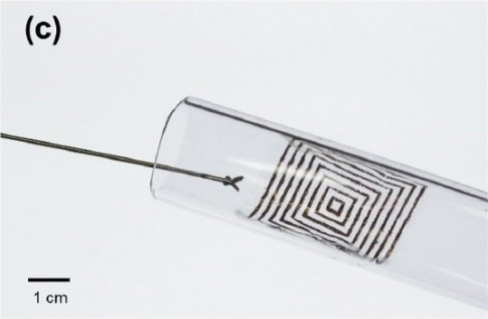 Being both strong and flexible, the polymeric thin film can withstand handling with forceps used in endoscopic surgery, as well as being rolled and inserted into a 15-mm diameter tube. (Adapted from Saito et al., 2021)

The polymeric thin film heating device can be sent non-invasively to tumor tissue using an endoscope. And by applying a magnetic field from outside the body, it is possible to heat the tumor tissue without the need for large equipment. This could likely lead to cancer thermotherapy becoming more widespread. 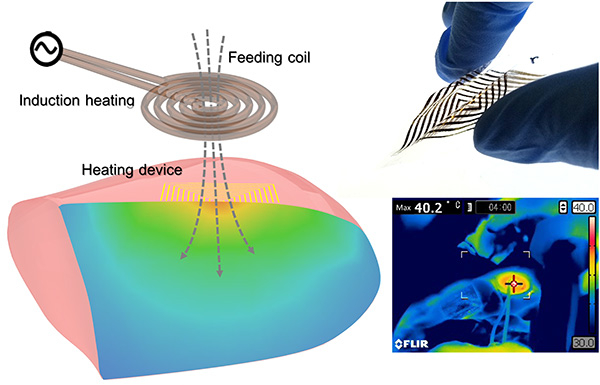 [2] Gold nano ink : An ink made from dispersing gold nanoparticles in a solvent. Because gold is conductive, an electronic circuit can be manufactured using printing methods.

With a super-aged society and ever more sophisticated medical care, there is increasing medical device development based on innovative concepts that cross the boundaries of medicine, sciences, and engineering. In this research, we developed a unique implantable heating device based on induction cooktops. This result is an example of collaboration between medicine and engineering coming to fruition, from simulation-based circuit design to clinical proof-of-concept. It is a promising first step to making cancer thermotherapy more widespread.

We would like to thank our collaborators, including Professor Noriyuki Matsutani of Teikyo University who told us about the various medical challenges and needs from a clinical perspective during the course of this study. In order to provide this technology as soon as possible to patients fighting cancer, their families, and medical workers, we will continue to develop medical devices that match medical needs with "research seeds."