Scientists at Tokyo Institute of Technology decipher how to quantitatively assess the effects of specific epigenetic changes on the rate of transcription by developing a mathematical model. For this, they successfully generated reconstituted chromatin bearing histone modifications in vitro. Their study published in Nucleic Acids Research provides an accurate quantitative approach for understanding how site-specific changes to histone proteins impact the accessibility of chromatin and gene expression levels. 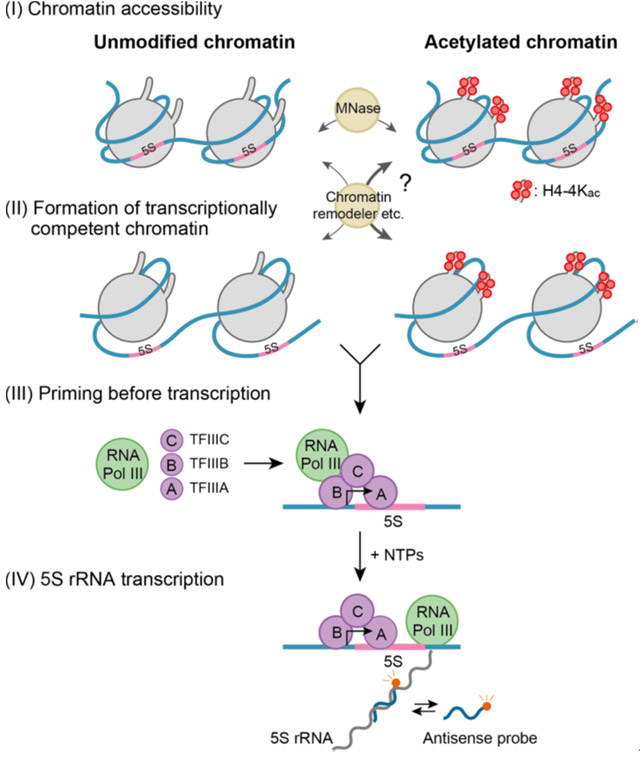 The creation of a single protein is a long and complicated process. Even just the generation of its blueprint itself, known as a coding transcript, from a DNA template involves numerous steps and players. To start with, the DNA is usually found neatly wrapped around proteins called histones to form a nucleosome, the fundamental subunit of a tightly condensed structure called chromatin. The extent of its condensation determines how much of the DNA is "available" for the transcription process. Changes to these histones, such as acetylation, also influence the accessibility of chromatin for gene expression. These "epigenetic" modifications play a crucial role in regulating gene expression. To date, much remains to be explored regarding how these epigenetic effects can be accurately quantified and how site-specific histone modifications can affect gene expression.

To answer these questions, a group of researchers led by Prof. Masahiro Takinoue from Tokyo Institute of Technology, Prof. Kohki Okabe from The University of Tokyo, and Prof. Takashi Umehara from RIKEN Center for Biosystems Dynamics Research, Japan have developed a kinetic model to quantify the contribution of epigenetic changes on transcription rates based on highly quantitative experimental results. Talking about their recent work published in Nucleic Acids Research

, Takinoue explains, "The contribution of each modification state of each histone to the sequential steps of chromatin transcription was yet to be quantified because of the difficulty in precise reconstitution of a chromatin template with the epigenetic modification(s) of interest and quantification of RNA transcription from it. Using genetic code expansion and cell free protein synthesis, we synthesized histone H4 containing designed site-specific acetylation(s) and reconstituted a tetra-acetylated nucleosome."

To study how site-specific histone modifications, including acetylation, affect the stages of transcription, the researchers created a reconstituted nucleosome carrying two copies of an RNA coding sequence from Xenopus, a frog species, with acetylation on specific sites of the histone proteins. This system simulates the dynamic changes in chromatin within the living cell, which affect transcription. They developed an accurate and highly sensitive fluorescence-based detection system that can measure the minute concentrations of transcripts in real time. On applying their kinetic model (see Figure 2), they found that acetylation at four specific histone sites increases the accessibility of chromatin threefold when compared with chromatin lacking acetylation. 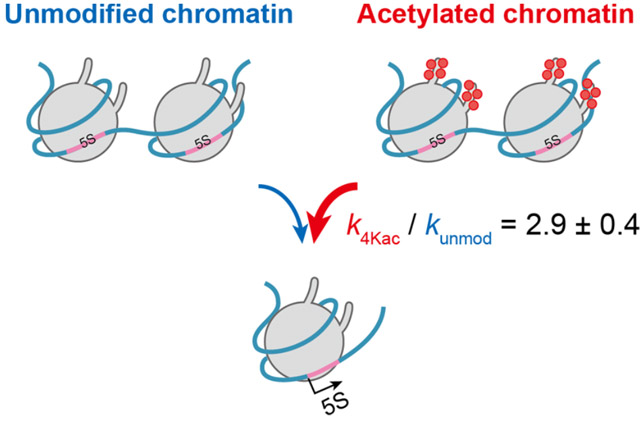 This kinetic model from the study can be applied for quantification of epigenetic changes on transcription rate.

The model's versatility also allows for it to be used for quantifying other epigenetic modifications. Highlighting the potential applications of their study, Takinoue states, "Our mathematically described kinetic model allowed us to determine the rates of chromatin transcription from non-acetylated and tetra-acetylated chromatin templates. Our methodology will be applicable to a wide variety of chromatin-mediated reactions for quantitative understanding of the importance of epigenetic modifications."