Scientists at Tokyo Institute of Technology (Tokyo Tech), Japan, have shown for the first time how specific metabolites produced by autophagy are utilized by a cell. They discovered that in budding yeast adapting to respiratory growth, autophagy—an intracellular recycling system—recycles the amino acid serine to trigger growth through mitochondrial one-carbon metabolism. This study shows how the recycling function of autophagy is crucial for adaptation to fluctuating environmental conditions.

Cells must utilize nutrient resources as efficiently as possible in order to ensure survival. This involves an intricate balance between the synthesis and degradation of cellular components, the latter of which can be used to liberate metabolites from unneeded components during periods of stress. Autophagy is a key intracellular degradation pathway that is triggered under such conditions. Autophagy captures and transports cellular material to a special compartment called the vacuole (or lysosome in animal cells), where they are degraded to produce basic metabolites such as amino acids, which are the building blocks of proteins. These metabolites can then be returned to the cytoplasm for reuse by the cell.

How exactly are these autophagy-derived metabolites used? While scientists have found that this recycling is important, where metabolites are needed in the cell is not known.

To address this question, researchers from the Tokyo Institute of Technology (Tokyo Tech), Japan, and Monash University, Australia, including the 2016 Nobel Laureate in Physiology or Medicine, Dr Yoshinori Ohsumi, set out to identify how autophagy-derived metabolites are used by cells. Their findings have been published in Nature Communications.

Dr Alexander I. May, lead author on the paper, explains: “We wanted to gain a better understanding of the physiology of autophagy, which is a long-standing question in the field of autophagy research. We transferred mutant yeast cells, which are incapable of autophagy, from a glucose medium to an ethanol medium, forcing these cells to adapt to respiratory growth in a way that’s very easy to observe. This change to respiration requires a huge increase in mitochondrial function and therefore involves remodeling of the bulk of the cell’s metabolic machinery. We found that autophagy-defective yeast took longer to adapt to respiratory growth than the normal yeast cells do, and we worked backwards from this observation to uncover why.”

The team then looked in further detail at cells undergoing the transition from fermentation, when yeast cells break down glucose to ethanol in the cytosol to obtain energy, to respiration, during which other carbohydrates are utilized to make energy in mitochondria. They discovered that this transition triggers autophagy, suggesting that cells need to recycle metabolites to adapt to respiration.

What autophagy-derived metabolites help facilitate respiratory growth? To find out, the group first searched for nutrients that may be recycled by autophagy to support growth, individually adding metabolites to autophagy-defective mutant cultures and testing whether each metabolite was able to help cells adapt to respiration and thereby support normal growth. It turned out that the amino acid serine is able to rescue the delayed adaptation of autophagy mutant cells to respiratory growth.

Explaining the outcomes of this study, Dr May says: “In yeast adapting to respiratory growth, autophagy plays a central role in providing serine to mitochondria, which otherwise experience a critical shortfall in serine. Serine is used by numerous pathways in the cell in addition to mitochondrial respiration, suggesting that competition exists between these pathways. On a more conceptual level, our findings indicate that autophagy provides key adaptive pathways with sufficient precursors, thereby allowing the most efficient deployment of cellular resources during their adaptation to environmental fluctuations. This is critical when the concentration of important metabolites is reduced during periods of stress such as the glycolytic to respiratory transition, when competition between cellular pathways for limited resources acts as a bottleneck on growth”

In addition to furthering our fundamental understanding of autophagy, this study establishes a yet-unknown link between autophagy and one-carbon metabolism, which is known to play an important role in cancer cell metabolism. The results may provide medical researchers developing therapeutic strategies with a new tool to attack cancer cells. 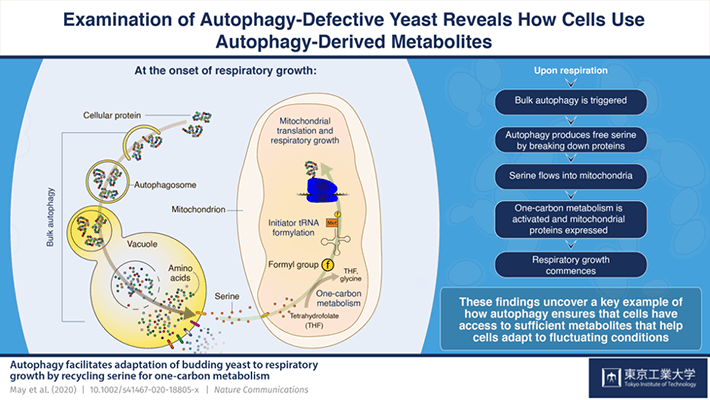 Assistant Professor Alexander I May