Fourth-year students Ami Kawai and Nami Tsuda from the Titech Sailing Team, an official student club, finished sixth at the 86th Kanto Intercollegiate Fall Women's Student Sailing Competition, held on September 14 and 15 at Morito Coast in Hayama, Kanagawa Prefecture. The performance was a wonderful way for the talented Tokyo Tech pair to complete their four-year stint of competitive sailing before they fully focus their efforts on academics and research. 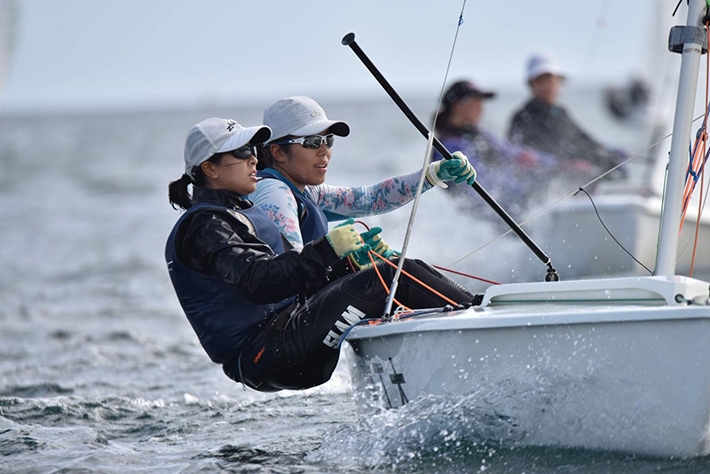 The Kanto Intercollegiate Women's Student Sailing Competition is a team contest that features two types of boats -- the Snipe1class and the 4702 class. This year, Tokyo Tech's women had two teams racing in the former and one team racing in the latter class. Overall, the Institute finished eighth in the competition.

We have been very busy in the lab, and therefore had to come up with a strategy to produce decent sailing despite having very little practice time.

Throughout the two race days we were able to maintain stable results under conditions that suited our style of sailing. This was the culmination of four years of competitive sailing, and we hope to apply the tenacity we have developed through sailing to our research.

The Titech Sailing Team is a group of ocean-loving sailors who polish their seafaring skills off the Hayama coast in Kanagawa Prefecture. The team has access to five 470-class dinghies and five Snipes, as well as two rescue motorboats in case the seas get rough. Members often head to the seaside on Saturday morning and only return to Tokyo on Sunday evening. The group is strongly supported by a 400-member group of alumni whose motto is "developing full-fledged sailors, full-fledged members of society."

1 Snipe The Snipe is a 4.72-meter sailboat designed by William F. Crosby in 1931. It was originally intended as a boat that can be rigged and launched in a short time, and has maintained its position as one of the most popular two-person racing sailboats since its creation. The Snipe gets its name from the species of long-beaked bird.

2 470 The 470 (four-seventy), so named due to its 4.7-meter length, is a sailboat designed to plane easily. Sailing the boat efficiently requires strong teamwork from its two members. Designed in 1963 by Frenchman Andre Cornu, the 470 has been an Olympic sailing class since 1976.