This "Spotlight" series features a laboratory from the Department and introduces you to the laboratory's research projects and outcomes. This time we focus on Junji Hirota Laboratory. 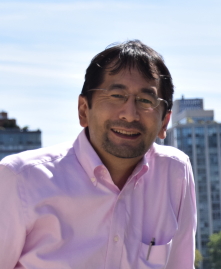 ※Professor Junji Hirota was promoted from a Associate Professor on June 1, 2021.

Olfaction, the sense of smell, is essential for the survival of individuals and species. Odorant receptors (ORs) have evolved to adapt to their chemical environments and this has driven the establishment and diversification of the largest gene family in vertebrates, i.e., ~1,100 functional OR genes in mice, and ~400 in humans. Phylogenetic analyses separate mammalian OR sequences into two distinct groups, which are referred to as class I and class II ORs. Class I OR genes, which were first identified in fish and then in frog, were initially considered to be evolutionary relics in mammals. However, genomic analyses have revealed that mammals possess a substantial number of functional class I OR genes, suggesting that class I ORs have physiologically important functions. On the other hand, class II OR genes are specific to terrestrial animals and account for ~90% of the mammalian OR repertoire. Intriguingly, individual olfactory sensory neurons (OSNs) are believed to express a single functional allele of a single OR gene from the repertoire of either class I or class II ORs.

Our research team aims to understand the molecular mechanisms underlying the binary fate specification of OSNs between two classes of ORs and the subsequent singular OR gene choice. In addition, we also work on the development and application of the Bacillus subtilis genome (BMG) vector system to mouse genome engineering. 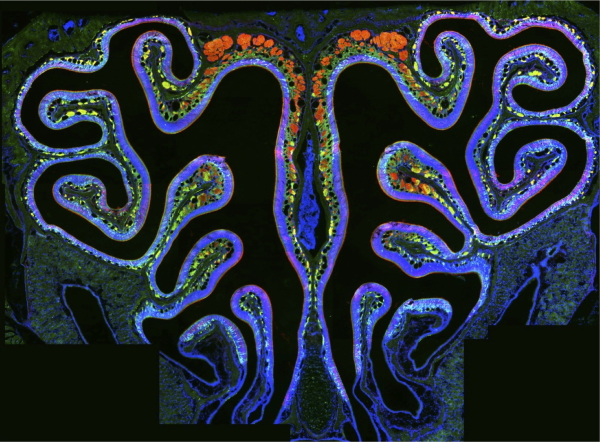 Figure 1. The mouse main olfactory epithelium is a complex mosaic of ~2,200 OSN populations, each defined as expressing one allele from a choice of 2 x ~1,100 OR genes.

1. Molecular mechanism of the singular OR gene expression

For the singular OR gene expression, OSNs must first choose an enhancer element. However, we have an incomplete picture of OR enhancers. In fact, only a few enhancer elements have been identified. Moreover, the repertoire of OR is classified into two groups, referred to as class I and class II ORs, but none of enhancers for class I are identified to date. Because class I OR genes form one of the largest gene clusters in the mouse genome, i.e., 158 class I genes reside in a single cluster spread over a ~3 megabase genomic region, it has been challenging to manipulate such large genomic region to identify enhancer elements.

Recently, by using a combination of a novel genome engineering technique of the Bacillus subtilis genome vector system, bioinformatics, and the CRISPR/Cas9 system, we, for the first time, identified an enhancer element for mouse class I OR genes, named the J element, which exhibits a unique feature with respect to its extraordinary long-range regulation. The J element regulates class I gene expression of a much larger number of genes (75 OR genes) and over a much greater genomic distance (~3 Mb) than class II gene enhancers (7 - 10 genes, ~200 kb). Moreover, its extraordinary long-range regulation surpasses any other known enhancer elements. In addition, our data, which revealed the evolutionarily conserved OR enhancer element across mammalian species shed insights into a long lasting mystery in OR evolution why the class I genes stay in a single cluster on a single chromosome during evolution (whereas class II genes spread over almost all chromosomes by duplications and translocations). We also provide genetic evidence that the allelic exclusion of OR gene is determined by the activity of the J element, and thus propose a new model of the enhancer-dependent singular OR gene expression.

In the quarter-century since odorant receptor (OR) genes were first identified (Buck and Axel, Cell 1991), genome analyses have uncovered a complete picture of the huge repertoire of OR genes in various species. Each olfactory sensory neuron expresses a single OR gene from either the class I or class II repertoire to give rise two distinct olfactory sensory neuron populations, a fundamental distinction that is critical to both the anatomical and functional organization of olfactory system However, while we have known that two classes of ORs exist for more than 20 years, the mechanisms that regulate the class choice of olfactory sensory neurons have remained an open question. By screening OR-class specific transcription factors and a series of mouse genetic experiments, we study on the molecular mechanisms underlying the binary fate specification of OSNs.

The transient receptor potential M5 (Trpm5) was first identified in sweet, bitter, and umami taste cells, and plays a critical role in taste signaling. Interestingly, Trpm5-expressing cells have been also found in several extraoral tissues, and their function as chemosensory cells have gradually emerged. For example, in the respiratory epithelium and the urethral epithelium, Trpm5-expressing cells express taste receptors and their downstream signaling molecules, and respond to classical bitter substances and bacterial signaling molecules, inducing physiological protective responses. In the intestinal epithelium, Trpm5-expressing tuft cells release interleukin-25 to initiate type II immune response and clear the gut from the parasites, further providing experimental evidences that Trpm5-expressing cells function as a gatekeeper of biophylactic reactions. We study on the molecular mechanisms of generation of Trpm5-expressing chemosensory cells and their physiological functions. 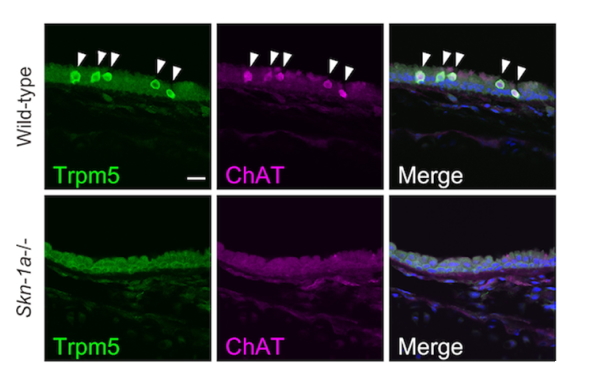 Immunosignals of Trpm5 and choline acetyltransferase (ChAT) observed in wild-type mice were no longer observed in Skn-1a-deficient mice, indicating that Skn-1a is essential for the functional differentiation of Trpm5-positive tracheal brush cells. (Yamashita, et al., PLOS ONE 2017).

The Bacillus subtilis genome (BGM) vector is a novel cloning system for large DNA fragments developed by Prof. Itaya at Keio Univ., in which the entire 4.2 Mb genome of B. subtilis functions as a vector. The BGM vector system has several attractive properties, such as a large cloning capacity of over 3 Mb, stable propagation of cloned DNA and various modification strategies using RecA-mediated homologous recombination. However, genetic modifications using the BGM vector system have not been fully established, and this system had not been applied to transgenesis. In our laboratory, we have applied the BGM system to mouse genome, and have developed the genetic modification methods of the BGM vector system and the BGM transgenesis techniques. 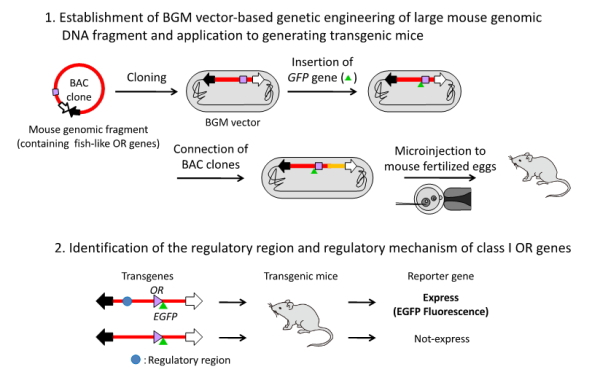 Figure 4. Schematic diagram of the application of the BGM system to mouse genome to identify an enhancer element for class I OR genes.