Researchers at Tokyo Institute of Technology (Tokyo Tech) and the Monell Chemical Senses Center in the US have found a key protein (Skn-1a) acts as a master regulator for the generation of chemosensory cells in mice. As these cells are known to detect bitter or toxic substances, the study provides insights into the body’s innate defense mechanisms and could lead to the development of new drugs in future. 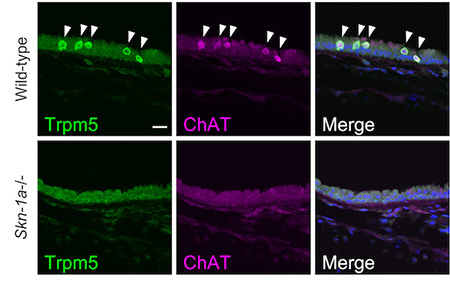 Growing evidence shows that sensory cells which enable us to taste sweetness, bitterness and savoriness (umami) are not limited to the tongue. These so-called Trpm5-expressing chemosensory cells1 are also found in the respiratory system, digestive tract and other parts of the body.

Although their precise function in areas other than the mouth are not fully known, these sensory cells are thought to play an important "gatekeeper" role, protecting the body against bacteria and potentially harmful substances.

Now, researchers have found that a protein called Skn-1a2 behaves as a master regulator3 for the generation of these cells across multiple tissues and organs.

"Based on our previous studies, we knew that Skn-1a plays an essential role in generating these cells, for example, in the nose," says Junji Hirota, associate professor at the Center for Biological Resources and Informatics, Tokyo Tech.

In the new study published in PLOS One, the researchers comprehensively analyzed multiple tissues using knockout mice4 and bio-imaging techniques. "One by one, we found that without Skn-1a, the sensory cells were not generated," says Hirota. "All of our results indicated that Skn-1a is a master regulator for the generation of these cells throughout the body."

The study arose from a collaboration between two teams — one led by Hirota, a specialist in olfactory systems, and the other by Ichiro Matsumoto, an expert on taste receptors at the Monell Chemical Senses Center in Philadelphia.

Hirota says: "Our collaboration is very fruitful — by working together, we can extend our knowledge beyond the nose and tongue to the whole body." Following Matsumoto's original discovery of Skn-1a, published in Nature Neuroscience in 2011, the two teams found that Skn-1a is vital for generating chemosensory cells in the nasal respiratory epithelium (in 2013) and the main olfactory epithelium (in 2014).

Many questions remain about why these cells are found in such a wide range of organs.

"For example, in the trachea, we think there may be at least two or three types of chemosensory cells," Hirota says. "We're interested in their characterization — this would contribute to fundamental knowledge of biological systems."

The thymus is particularly intriguing, says Hirota, as it is different to the respiratory and digestive systems, and could lead to new research directions in immunology.

In the urethra, chemosensory cells may help protect the body against infections, for example by sending signals to release more urine, thus ridding the body of potentially dangerous bacteria or toxins.

"If we can identify the receptor types expressed by these chemosensory cells, we can enhance our understanding of how they detect hazardous compounds," Hirota says. "Then, by studying which ligands5 or substrates bind to these receptors, it may be possible to identify new candidate drugs in future."

Cells that express transient receptor potential channel M5, an ion channel that is a key molecule for signal transduction.

A protein — or more specifically, a transcription factor — now known to be essential for the generation of Trpm5-expressing chemosensory cells.

A gene or protein that controls a particular biological pathway.

Experimental mice with a targeted deletion of a protein or gene prepared for the purpose of understanding the role of the deleted component. In this study, knockout mice refer to Skn-1a-deficient mice.

A molecule that binds to a target protein, changing its conformation and thereby producing a signal.