The chemical modification of proteins with synthetic probes is an important technique in chemical biology. It is one of the essential tools for the development of protein-based therapy and protein imaging technology.

With regard to tyrosine modification strategies, several reactions that proceed in an aqueous environment have been reported. However, few exhibit tyrosine specificity and good modification efficiency, and an efficient tyrosine-specific peptide/protein modification method is desired.

HRP has been used previously for tyrosine modification reactions; examples include tyrosine-tyrosine cross-coupling,1-3 and coupling between tyrosine residues and tyramide (Scheme 1A). It is utilized for tyramide signal amplification (TSA), which involves the covalent deposition of a fluorophore-tyramide conjugate around a HRP-conjugated secondary antibody, resulting in localized fluorescent signal enhancement.4,5 Although HRP-catalyzed protein modification based on tyramide is expected to have wide-ranging biological applications, the problem faced by current technologies is the low protein labeling efficiency.6 There is an obvious need to develop efficient peroxidase-catalyzed protein labeling technologies to overcome the limitations of HRP-based protein imaging. Recentlhy, we found that horseradish peroxidase (HRP) effectively catalyzes the oxidative activation of luminol derivatives and induces tyrosine-specific modification with high efficiency7 (Scheme 1B).

Figure 1. Concept of this work: A) tyramide method, B) this work. Tyrosine modification by using N-methyl luminol derivatives and HRP.

The efficiencies of tyrosine modifications were determined by LC-MS analysis. Under the reaction conditions, with HRP and H2O2, the efficiency of labeling with tyramide was low because of a side reaction, involving an oxidative tyramide radical process (Figure 2A). In contrast, efficient modification was achieved when N-methyl luminol derivative, 0.1 mol% HRP and 1.0 equiv H2O2 were used. Neither tyrosine-tyrosine crosslinked product nor byproduct derived from tyrosine was detected under these reaction conditions (Figure 2B). 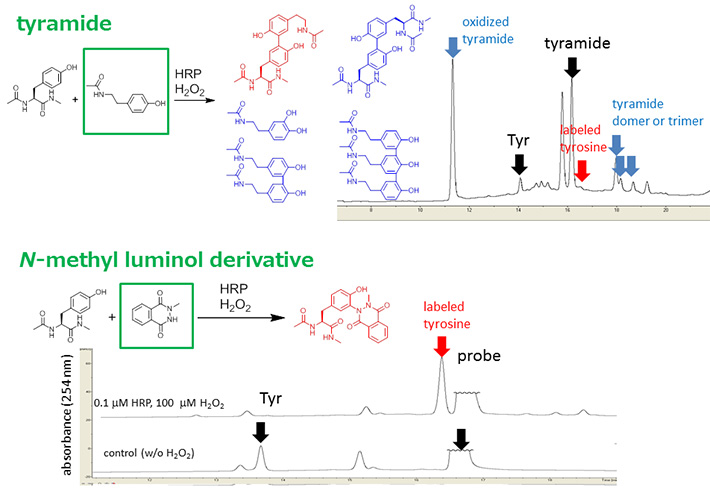 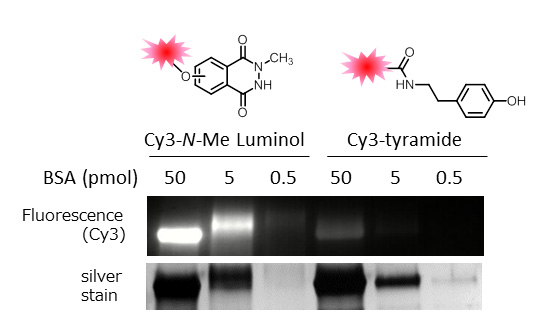 N-methyl luminol derivatives showed much higher efficiency than tyramide without inducing oligomerization of probe molecules. The use of HRP, a widely employed reporter molecule in biological research, in the current method is expected to open doors to such biological applications as signal amplification of HRP-conjugated antibodies, local labeling around peroxidase-tagged molecules, and protein-protein complex analysis in combination with peroxidase-tag technology.