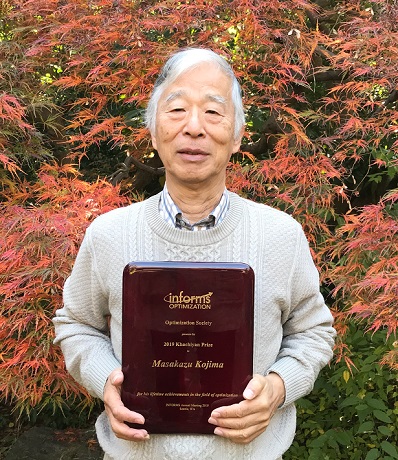 Professor emeritus Masakazu Kojima, who dedicated for a long time to the education and research at the Department of Mathematical and Computing Sciences (currently Department of Mathematical and Computational Science), received the Khachiyan Prize from the Optimization Society of the INFORMS (Operations Research, Management Science, and Analytics Society of the United States).
The Khachiyan Award is given to individuals or teams who have been recognized for their many years of achievement in the field of mathematical optimization, and is also known as one of important awards given by the Optimization Society.
Professor emeritus Masakazu Kojima proposed the primal-dual interior-point methods for linear optimization problems in the 1980s together with Nimrod Megiddo, Prof. Shinji Mizuno, Toshihito Noma, and Prof. Akiko Yoshise. In 1992, they were awarded the Frederick W. Lanchester Prize (best book published in the past 5 years) and the Computer Society Prize (best paper) for their contribution.