Multinuclear organometallic junctions might be the key to realizing high-performance thermoelectric devices at the nanoscale, as revealed by scientists at Tokyo Tech and Korea University. The unique electronic structure of organometallic ruthenium alkynyl complexes allowed the researchers to achieve unprecedented heat-to-electricity conversion performance in molecular junctions, paving the way to molecular-scale temperature sensors and thermal energy harvesters. 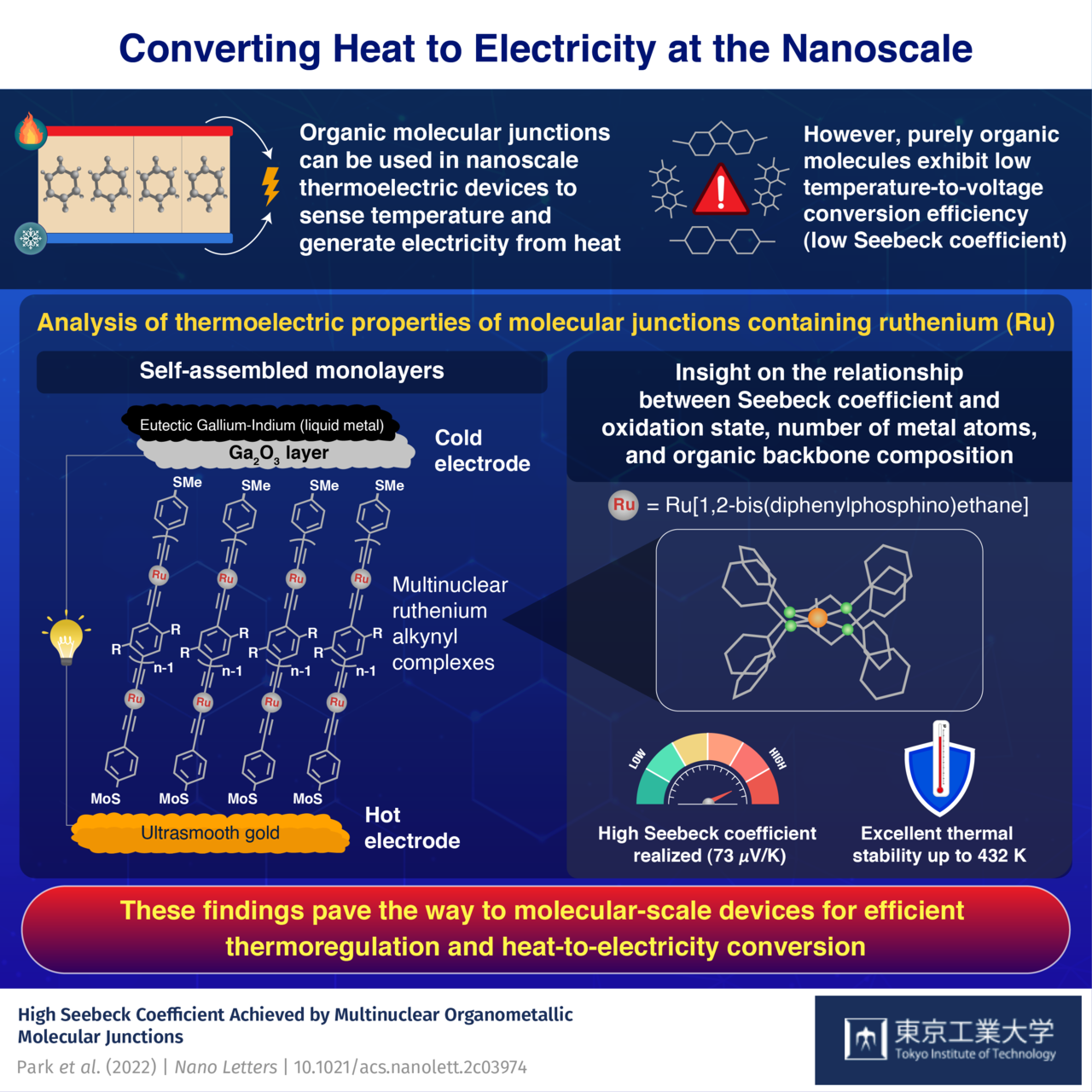 The Seebeck effect is a thermoelectric phenomenon by which a voltage or current is generated when a temperature difference exists across a conductor. This effect is the basis of established and emerging thermoelectric applications alike, such as heat-to-electricity energy harvesters, sensing devices, and temperature control.

In line with the unrelenting demand for ever-smaller devices, scientists are looking for new ways to leverage the Seebeck effect at the nanoscale. One way to achieve this is by using molecular junctions, which are miniature devices consisting of two electrodes bridged by one or a few individual molecules. Depending on how sensitive these molecules are to temperature, it is possible to fine tune the thermoelectric properties of molecular junctions to match their intended application.

Thus far, most studies on molecular thermoelectrics have been limited to rather simple organic molecules. This has led to molecular junctions with a low Seebeck coefficient, which translates to poor temperature-to-voltage conversion and performance. There is therefore an ongoing challenge to design molecular junctions with better characteristics and, most importantly, a higher Seebeck coefficient.

Fortunately, a recent study conducted by a research team including Assistant Professor Yuya Tanaka of Tokyo Institute of Technology (Tokyo Tech), Japan, and Professor Hyo Jae Yoon of Korea University, Korea, may lead to substantial progress in this field. As stated in their paper published in Nano Letters

, the researchers had set their eyes on a particular type of organometallic compound that could be the key to this conundrum: ruthenium alkynyl complexes. But unlike previous studies, the team was curious as to whether multinuclear ruthenium alkynyl complexes based on multiple Ru(dppe)2 [where Ru is ruthenium and dppe is 1,2-bis(diphenylphosphino)ethane] fragments could lead to more powerful molecular junctions, thanks to their unique electronic structure.

To test their theory, the scientists prepared various self-assembled monolayers (SAMs) consisting of two opposing flat electrodes connected by organometallic compounds with different numbers of ruthenium alkynyl complexes. The hot electrode was made of ultrasmooth gold to provide a good anchoring substrate for the organometallic molecular junctions, while the cold electrode was made of a liquid metal, eutectic gallium-indium, covered by a gallium oxide layer (Figure 1). 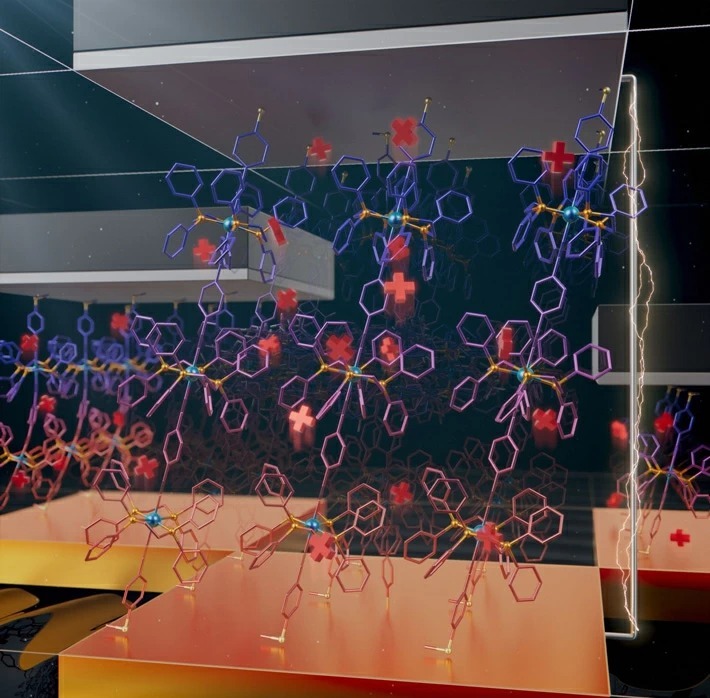 The team studied, through various experiments and theoretical methods, how the Seebeck coefficient of these SAMs changed depending on the number of ruthenium atoms in the molecular junction, as well as the oxidation state and detailed chemical composition of its organic backbone. Notably, they found that the prepared molecular junctions achieved unprecedented thermoelectric performance, as Assistant Professor Tanaka remarks: "Our organometallic compounds exhibited much higher Seebeck coefficient values than their purely organic counterparts. Moreover, to the best of our knowledge, a Seebeck coefficient of 73 μV/K, obtained for the tri-nuclear ruthenium complex, is remarkably superb compared to conventional molecules reported in literature." Adding to this, the prepared molecular junctions had remarkable thermal stability, which broadens their potential fields of application.

These results are very encouraging for those working in the field of thermoelectronics, as they might point towards new strategies to finally achieve a breakthrough in the production of nanoscale semiconductors. "This work offers important insights into the development of molecular-scale devices for efficient thermoregulation and heat-to-electricity conversion," highlights Assistant Professor Tanaka.

Be sure to keep an eye out for new developments in thermoelectric molecular junctions in the future; they might be the key to sustainable power generation from heat and thermal control in next-generation electronic devices.